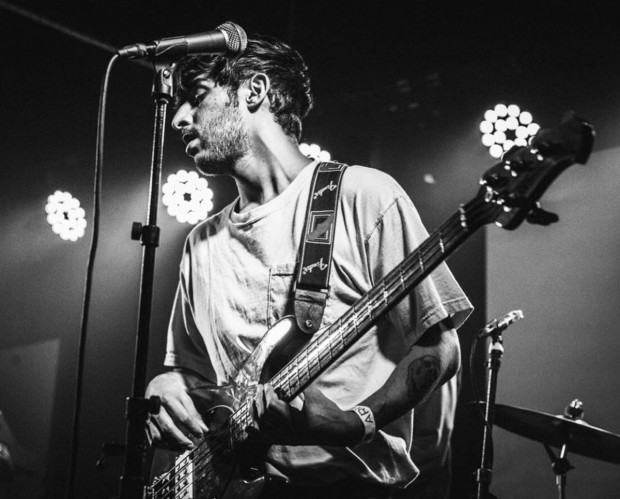 This week’s Name That Tune is brought to you by Dylan Villarreal, a talented musician who has played in multiple bands and is on his way to releasing his first LP later this year. We chatted with Dylan to learn about his musical roots and what it’s like to be a musician during the pandemic. Below are excerpts from our interview.

How did you develop your interest in music?
When I was a kid, my friend’s dad was playing this Irish folk music. He was strumming really hard, and I said, ‘I wonder how hard that is to do.’ I had him show me my first guitar chord, and from there, I asked my parents for a guitar and they got me one around age 12.

What happened after you got your guitar?
I decided I didn’t want to take lessons because that was too hard. I immediately started teaching myself. I just wanted to write music … I’ve been making ditties since I was in middle school.

Did you take lessons down the line?
I never took a guitar lesson. I just got a book and started trying to teach myself because I couldn’t stand the idea of someone teaching me.

Wow, that’s very impressive. Without lessons, how have you managed to continue developing your skills?
It’s really been learning from friends and people I play with and picking up stuff that they’ve mastered. It’s keeping up with everyone that keeps me going. You have to get better and better to not fall behind.

In addition to the guitar, you mentioned that you play other instruments like the drums. How did you pick those up?
I started realizing that nobody is going to make those parts of songs that I like, so I’m going to have to figure out how to do it. I begged for a drum set when I was 15. I’d come home from school every day and eat Oreos and watch Cops and then I’d go practice drums for two hours and listen to Red Hot Chili Peppers. That was my routine every day for a year.

Tell me about where you grew up and went to school.
I grew up in Bellaire. I went to Bellaire High School and graduated in 2012, and then I immediately went to the University of Houston for about two years or so until I just dropped out to pursue music full time. It seemed like the right thing to do. As soon as that happened, I was offered a position at a church to play in a band, which took up most of my time. That was steady income, and I picked up odd jobs here and there while I was writing my LP, which has been 7 years in the making. [Dylan plans to release his first album by the end of the year]. I then auditioned for one of my favorite bands in Houston [Deep Cuts] and got the part. They became my best friends and we went on tour and have been figuring out how we’d release music on the internet.

What was it like to start playing in a band, when you had previously played mostly on your own?
It was cool to finally meet musicians. My first band was actually Jazz Radio.  It was really cool to meet other musicians who I jelled with. I had never found that before. We just immediately started playing all these shows and touring around Houston, and it felt so cool to be a part of something. Even though we had never released a single, we played over 30 shows in Houston. We were getting booked for no reason. People had no reason to book us, it was all through [word of mouth].

So are you still a part of Jazz Radio as well as Deep Cuts?
[Jazz Radio] dissolved but the name was mine. So that’s what I’m releasing my LP under. That’s my brainchild, and that will come out by the end of December.

What’s your inspiration when you’re writing music?
It’s a broad category. Anything that evokes emotion.

What are you focusing on now, and what is it like being a musician during the pandemic?
Right now, we [Deep Cuts] are about to come out with an album and release it digitally. Everything is so up in the air right now, so it doesn’t look like there will be a lot of touring. Right now, it’s just about how do we get people to keep listening to music. We’re not going to play live shows any time soon, so it’s really just about practicing individually. That’s what it boils down to.

Editor’s note: Deep Cuts’ first single, “Chemicals,” will be out on all streaming platforms on May 20. If you play an instrument and want to participate in Name That Tune, email [email protected].