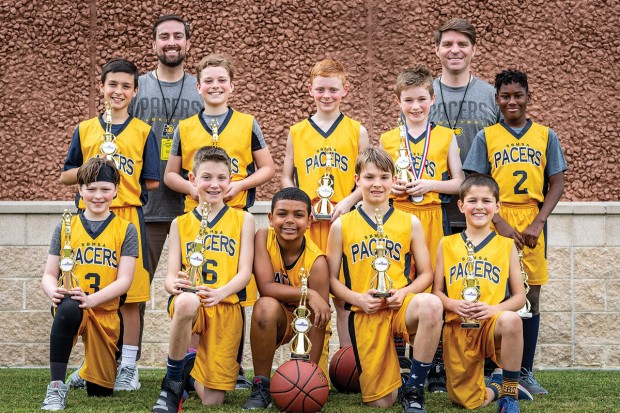 The 10U National League Pacers (pictured) are SBMSA gold-division champs. The whole team worked together in a game of well-played fundamentals to defeat the Blazers, 33-27. After losing their last regular-season game, the Pacers became determined to come back. Their motivation and hard work led them to win four games in a row during the playoffs, leading up to the championship game. The Pacers are fourth and fifth graders from Bunker Hill Elementary, Wilchester Elementary, Frostwood Elementary, Nottingham Elementary and Trinity Classical School who came together to form a cohesive team: (top row, from left) Miles Zurek, coach Mike Rigo, Connor Dillard, Jack Lasseigne, Connor Massey, coach Lane Walker, Isaiah Ober; (bottom row, from left) David Midani, Cooper Purdy, Danny Nichol, Joshua Walker and Atticus Rigo.