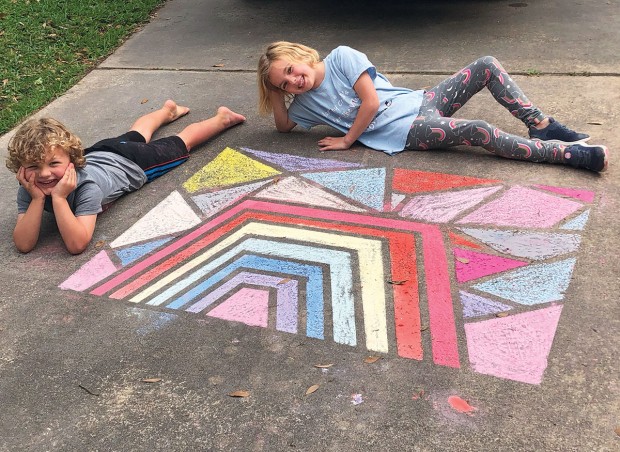 ARTISTS IN RESIDENCE Siblings Marin, 7, and Beckett Raish, 5, drew a colorful chalk mural in their driveway during the coronavirus quarantine.

Before March, I had never heard the term “social distancing.” The concept of staying away from others to prevent disease spread soon became part of our country’s daily vocabulary and a practice that I immediately had to teach my small children.

Social distancing has been a hard adjustment for them. They constantly ask to see their classmates and cousins. Our neighbor’s kid got a cool new bike, and my son wanted to touch it. I had to jump forward and stop him from putting his hands on it – such a quick moment I could have easily missed.

It’s been unusual and stressful – for all ages. But here’s a special slow clap, standing ovation, huge, huge shoutout to all the moms and dads holding it down with little ones.

I saw a meme (by a guy named Winston Chang) that read, “If there’s a baby boom in 9 months, it’ll consist entirely of first-born children.” I feel the truth in that.

As it goes with life though, there have been some silver linings.

Adults have come up with creative ideas to keep children in their neighborhoods entertained.

A personal favorite that I have seen is the “teddy bear hunt,” where families display stuffed teddy bears or pictures of teddy bears in their home’s windows. Neighborhood children then go on a “bear hunt” to see how many they can spot.

There’s a Facebook group called “Rainbows over Houston,” where people are encouraged to display rainbow artwork on their home: painted pictures in the windows, chalk drawings on the sidewalks and more. The page reads, “Rainbows are a symbol that we are in this together that lift spirits and give kids a rainbow spotting activity while on family walks.”

I’ve heard from a lot of Buzz parents who say that outside time, while maintaining social-distancing guidelines, has been the saving grace from being cooped up all day.

Mom-of-two Emilee Scott says her 4-year-old son, despite the fact that his tee-ball season was postponed, wears his uniform – cleats, belt, baseball pants and old jersey – out to the front lawn for “practice” in the evenings. “They were only able to have one practice before they postponed everything,” said Emilee.

It’s hard to drive down neighborhood streets with all of the walkers and cyclists.

I saw former teacher Brooke Raish, sporting a bright-colored pair of printed leggings, out on a bike ride with her husband Andy and their four kids. Brooke was peddling while her 8-month-old daughter Posey rode in a seat behind her. Callum, 3, rode in a bike trailer behind Andy, while Beckett, 5, and Marin, 7, rode their own bikes.

Brooke has been a personal inspiration to me during these times with her kids – she’s always got her kids doing something fun and creative, yet simple, like collecting rocks outside, drawing with sidewalk chalk, working on math with manipulatives, or painting at the dining room table.

If the kids ever get bored, she says, then that’s good too. I loved the quote Brooke shared on social media from professor/author Brené Brown: “Boredom is sacred. We shouldn’t deny our children this holy experience.”

Brooke is coordinating home schooling and learning time, too. “As long as we do one reading and one math activity per child a day, I feel like we are having homeschool success,” she said.

Like a lot of us, she is juggling a lot right now, being the cook, the teacher, the housekeeper. “At one point, I was holding the baby with one hand while I was squatting down, wiping the shower glass with glass cleaner.”

This time together has been eye opening. “It’s interesting to gain insight into how they are in the classroom,” Brooke said. “I didn’t realize my kids like to draw as much as they do. I’ve had them do an art lesson two days in a row on Art for Kids Hub, and I’ve been impressed with how well they are able to follow the directions.”

Quarantine days are some of the slowest-passing days when you have young kids. But at least there is nobody around to remind us how quickly childhood flies by. We have no choice but to slow down and notice it all.