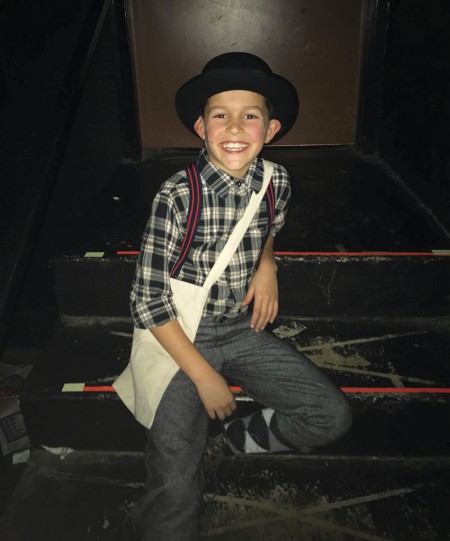 I love acting a lot. I love acting because I get to play a bunch of different personalities, and it’s challenging, but I like challenges. I got into acting through SCENES, a theater camp, when I was 5 years old. We did the show “Annie.” The director was the same person, award-winning director CeCe Prudhomme, who directed “Newsies” at Stratford High School when I played Les.

Last year, I was cast as Les in the show “Newsies” at Stratford. It was a principal role, and I rehearsed for nine months and performed in nine shows. I got to hang out with all the high schoolers. We also got to perform a number from the show at The Hobby Center through the TUTS (Theatre Under the Stars) high school musical awards program, the Tommy Tune Awards, because we were nominated for Best Musical.

This February, I auditioned at TUTS to play the role of Les again and got the part! Unfortunately, because of the coronavirus, it got cancelled. When I found out, I was really disappointed. But luckily, I’ve been in other shows, including playing young Simba in “The Lion King Jr.” and Flounder in “The Little Mermaid Jr.” at Wildfish Theatre. I also got to be in the pilot production of “Junie B. Jones: Essential Survival Guide to School” with all my siblings, which Wildfish put on at the Miller Outdoor Theatre last summer. We performed for over 5,000 people each day!

It’s so fun getting to perform in front of an audience. The crowd gets super fired up, especially on opening and closing night. My whole family loves theater. It’s really fun, actually. A lot of times my family just bursts into a song, and my parents sometimes get mad. My siblings and I all play piano, and when someone is singing, we’ll often randomly harmonize.

We help each other prepare for auditions, support each other in each show and get to see a lot of shows (at Wildfish, Queensbury, high schools, The Hobby Center and other places). This is what my theater family does.