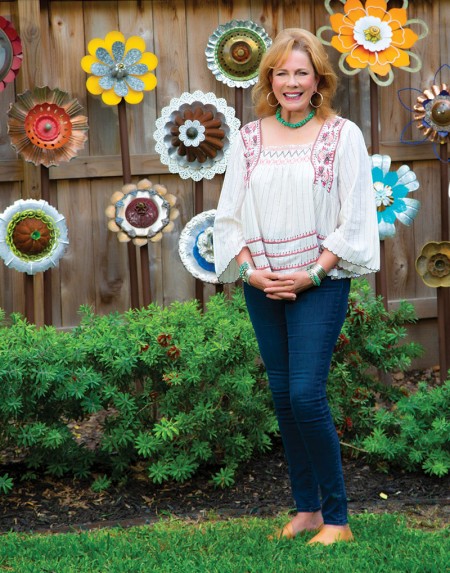 An ancient clock, a hubcap from an old car, a brass knob from a discarded piece of furniture – these might sound like pieces of rubble, but to Susan Coburn, they are valuable source materials.

Walk behind Susan’s cottage-style home in West University, and you’ll find yourself smiling in delight at the scene before you: a whimsical garden with a fence line of colorful flowers assembled from recycled metal objects.

Susan has made more than 100 of these sculptures since she began the project a year ago, molding objects ranging from egg holders to fancy silver trays into flowers.

“I started out just because I wanted to spruce up my garden a little bit, and then it became kind of a glorious obsession,” says Susan, a 69-year-old retired businesswoman. “I decided I wanted to cover the entire backyard.”

Susan, a charming, astute blonde who hails from the Bronx in New York, says the project began as a way to distract herself from missing her family. Susan’s daughter, Chelsea, used to live in the Heights with her husband and baby, but they moved out to the Hill Country last April.

A single mother, Susan decided she needed a new hobby. She found it in her backyard. 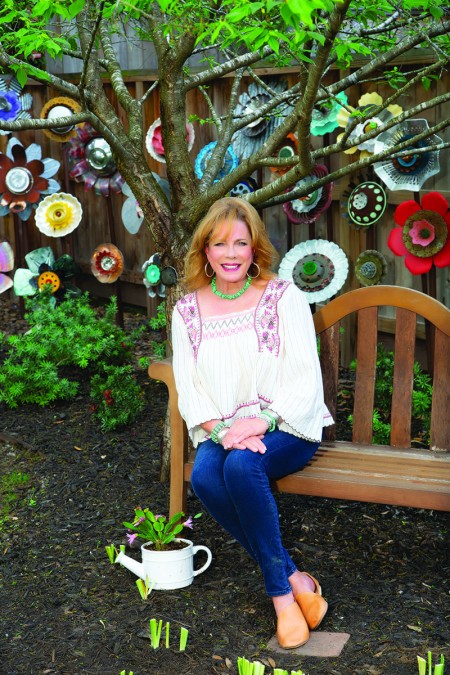 In one corner of Susan’s yard were four metal flower sculptures she had purchased on Etsy, an e-commerce site focused on handmade and vintage items. Looking at them one day, Susan felt inspired to create her own.

“I looked at them and said, you know, that doesn’t look too hard. I could do that,” she recalls.

To get started, Susan transformed her garage into a makerspace, with banquet-sized tables and industrial shears to cut and shape her materials. She quickly found herself working on the flowers every day. Some days were focused on procuring the materials, from a garage sale, her own house or a scrap-metal shop. Other days, she’d lay out all the objects on the table in the garage and simply stare at them for hours until inspiration hit. Other days were for assembling and reassembling the flowers.

Each flower in Susan’s garden is unique, and Susan wouldn’t dare choose a favorite. “They are like children,” she says. “I love them all.”

But, also like children, they do share some features. They are all layered, with multiple, upcycled metal items of different colors, textures and shapes drilled together. Each flower also has a matching stem, which Susan makes out of plastic PVC piping that she paints brown and stakes into the ground. She cuts the pipes to different lengths, giving the flowers irregular heights.

About six months ago, a photo of Susan’s yard began circulating on Facebook. It garnered nearly 7,000 likes and received a number of comments inquiring how people could purchase the flowers. Many seemed to assume the flowers were a business venture, and they even wanted Susan to make DIY videos teaching others how to create them. 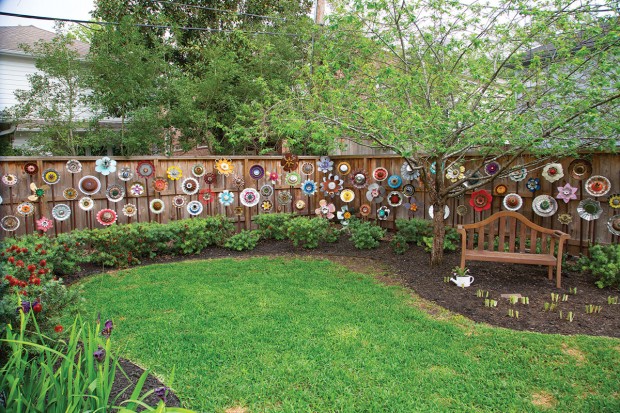 But Susan has no desire to turn this hobby into a business. She’s done that before – for almost 30 years, she owned a company that provided document services to the oil and gas industry.

“I used to have a business. I worked really hard all my life establishing a household and raising a daughter all by myself,” Susan said. “I didn’t really want to work anymore, and I was concerned that if I turned this into a business, it would become work. And I was tired of working.”

Susan says she’s happy to give flowers as gifts – she’s given them to friends for birthdays and weddings – but selling them is not in her playbook.

In some ways, Susan’s hobby is a window into her character. The flowers, much like other parts of her life, demonstrate her independence and industrial nature. Susan crafted each of the flowers on her own; she even staked them into the ground without enlisting anyone’s help. In other aspects of her life, too, Susan is fiercely independent. She raised a successful daughter on her own; she installed all of the ceiling fans in her home; she turned wine tasting into a job after retiring from her business.

The artistry Susan brings to the flowers is also evident in Susan’s great taste. Susan’s wardrobe seamlessly blends sophistication with fun, and her house is impeccably decorated, with accents of bright colors – a door painted blue, for instance.

“She’s always been somebody I would go to when I was decorating my house or trying to figure out what to wear,” Chelsea says of her mother. “She’s always been creative, but now she’s redirecting it to something more expansive.”

Now that Susan has accomplished her goal of filling her entire garden with upcycled flowers, she spends more time enjoying them and less time crafting them. Unlike real flowers, these creations require no maintenance.

“As they age, as opposed to dying and needing to be replaced, these rust and tarnish, and in my opinion, they become more beautiful as they age,” Susan says. “They require no water, no sunshine, no fertilizer. And they just continue to get more beautiful.”

When she’s reading a book in bed, or eating breakfast at her kitchen table, Susan smiles, looking out the window and admiring her creations.

“I just look out my window, and it makes me happy,” she says. “Everybody thinks it’s pretty spectacular. So that makes me happy too – knowing that it makes other people happy.” 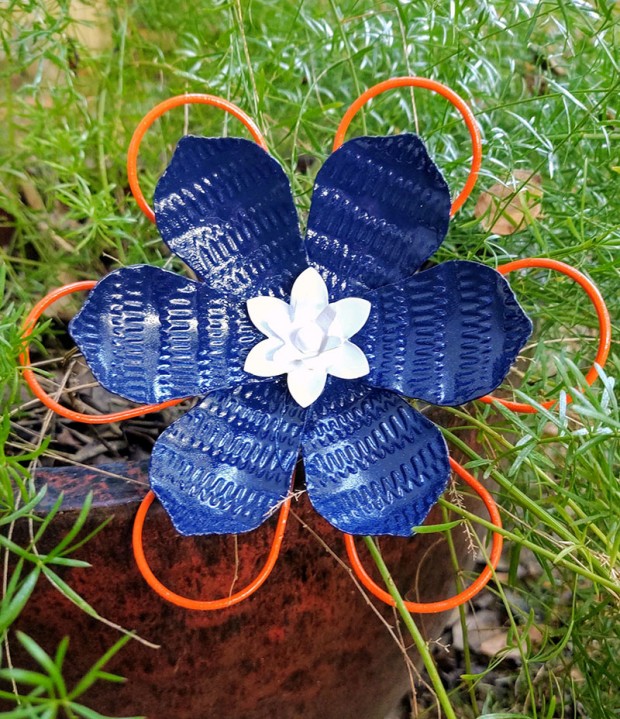 NAVY AND ORANGE Susan Coburn made this Astros-themed flower for her friend Patty Chesnik, who is a big fan of the ’Stros. 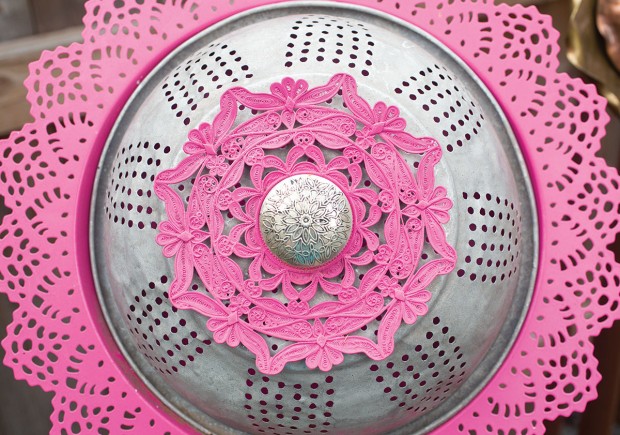 Many are made from old kitchen utensils, such as this one from a colander. (Photo: lawellphoto.com) 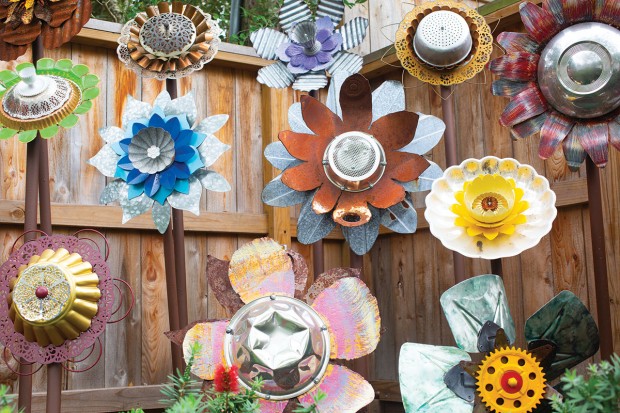 Susan says her flowers are like children. Each is unique, and she can’t choose a favorite. (Photo: lawellphoto.com)