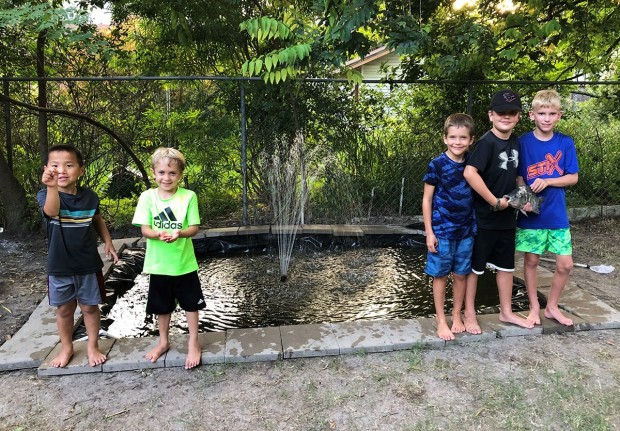 Three brothers who love to fish found a way to catch catfish and tilapia in their own yard. Like other kids during this extended spring-summer staycation, Aiden, Emjay and Zac Vorster were looking for ways to entertain themselves at home. One day, their mom, Louise, found them digging a hole in the yard. It didn’t surprise her because they are naturally very active, outdoorsy boys, but what started as a small activity eventually became a fully lined pond, stocked with fish.

“They come up with some pretty strange things because they are outside all the time,” said Louise of her boys, ages 9, 7 and 5, who attend Horn Elementary School. The Vorster family moved to Bellaire from South Africa about three years ago. “When we arrived in the States they were into catching lizards,” she said. The boys created homemade traps, from recyclable bottles, following along with a YouTube instructional video. 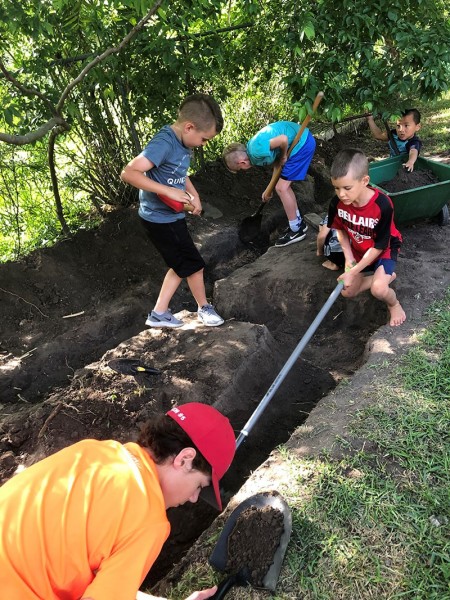 They are constantly exploring their surroundings, and enjoy building traps and searching for earthworms and spiders at Russ Pitman Park. “They also want to look for snakes, but I forbid it,” said Louise, laughing.

Aiden, Emjay and Zac worked on digging the hole until it was massive: about 8 feet by 10 feet. The news about their project spread throughout the neighborhood, and other boys joined the effort, including some high schoolers down the street who arrived to help with a wheelbarrow.

“Aiden is very entrepreneurial and saw this as a business venture, so he created a budget for adding different fish,” said Louise. They worked out a plan that included a pump, liner and filter, along with stones on the side to border the pond.

When it was all finished, the boys caught some fish at a friend’s lake house and relocated them to their new home in the Vorster backyard. “I like that we can keep the fish we catch and put them in our pond,” said Emjay. Younger brother, Zac, echoed his sentiments declaring, “I love the fish!”

The fishing-pond project is a fun alternative to their original, more elaborate summer plans. Initially, the family planned to travel to South Africa to visit grandparents on their game farm that is home to rhinos and buffalos. They also planned to visit the other set of grandparents who live at the coast, where they would have spent time fishing. It’s not nearly as exotic, but fishing in the Vorster’s backyard is a decent plan B.

“They have been asking for a pond for ages,” said Louise. “I guess they got tired of waiting.”