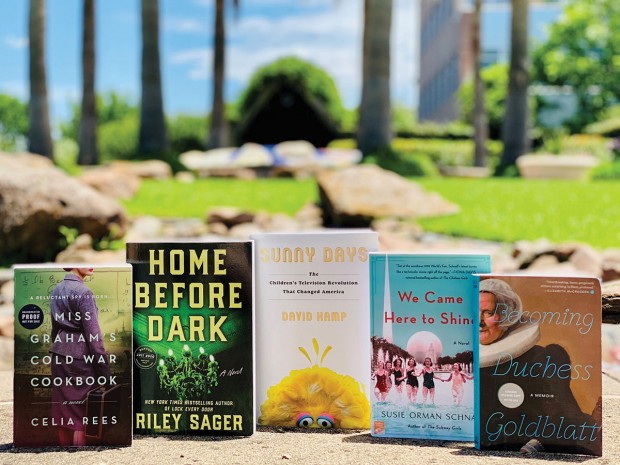 WHAT TO READ This month's picks include a memoir by a Twitter sensation, two historical fiction books set in post-World War II Germany and the 1939 New York World's Fair, a creepy thriller, and a Sesame Street retrospective.

Becoming Duchess Goldblatt by Anonymous: Duchess Goldblatt is a Twitter phenomenon who brings humor and joy to those who follow her. Becoming Duchess Goldblatt describes the creation of the fictional Duchess Goldblatt and the real-life story behind her: a lonely woman crippled by grief who begets a fictional internet persona to bring laughter and, inadvertently, a sense of community to an often-negative platform. She sprinkles her tweets throughout the book – and the responses these tweets received. Along the way, she befriends Lyle Lovett and others, including numerous authors, inspires groups to come together in her name, and is there for those who need a helping hand. Alternating between heartbreaking, heartwarming and hilarious, this book is the antidote for 2020.

Home Before Dark by Riley Sager: Baneberry Hall, a Victorian mansion in a remote area of Vermont, is the setting of Riley Sager’s latest thriller. Twenty-five years ago, Maggie and parents Ewan and Jess lived in the house for three weeks before fleeing in the night, never to return. Following their dramatic escape, Ewan wrote a non-fiction account, entitled House of Horrors, recounting the terrors and evil hauntings they experienced at Baneberry. Following Ewan’s death and with no memory of the events in House of Horrors, Maggie returns to the house determined to put the past behind her and prove that the property is not haunted. Alternating between the chapters of House of Horrors and Maggie’s present-day stay in Baneberry Hall, the story unfolds as Maggie begins to experience events that happened in her father’s book. The story starts slowly but picks up momentum as the creepiness factor ratchets up, and I enjoyed the clever and unexpected ending.

Miss Graham’s Cold War Cookbook by Celia Rees: Set in Germany following World War II, this historical-fiction tale follows Brit Edith Graham as she joins the Control Commission, an entity that hires civilians to rebuild war-torn Germany. Edith is tasked with setting up schools in ravaged towns. Before she leaves London, she is recruited by the OSS to spy while in Germany and send back intelligence through recipes she gathers as she travels. However, when Edith arrives, she realizes that many of the people in occupied Germany are not what they seem. Rees brings the post-war country to life – the devastation, rush to find war criminals, lack of food and shelter, underground Nazi movement that hopes to re-emerge, and slow uncovering of vicious Nazi experiments on humans. Masterfully detailed, this atmospheric book transported me to post-war Germany, with an intriguing cast of characters.

Sunny Days: The Children’s Television Revolution That Changed America by David Kamp: In this non-fiction retrospective, Kamp chronicles the forces that brought Sesame Street, Mister Rogers’ Neighborhood, The Electric Company and Schoolhouse Rock! to television screens in the late 1960s and early 1970s. The shows transformed children’s television and set a higher standard for programming. A current cultural icon, the musician and music journalist Questlove (front man of the band The Roots, on The Tonight Show Starring Jimmy Fallon), provides the introduction and reminisces about what Sesame Street meant to him growing up. Sunny Days describes the impact the TV shows had on generations of children of all colors and cultures who recognized themselves in the characters they saw.

We Came Here to Shine by Susie Orman Schnall: Against the backdrop of the 1939 New York World’s Fair, two women forge a friendship and summon up the courage to pursue their dreams. Vivi Holden wants to be a famous actress and first must perform well as the headliner for the Aquacade, the synchronized swimming extravaganza at the World’s Fair. Max aspires to be a journalist and must prove her worth covering the fair for its pop-up publication. Schnall deftly weaves in details from the actual World’s Fair and includes a beautiful (and helpful) map. Historical fiction steeped in spectacle, We Came Here to Shine is a story about courage, friendship and having the determination to achieve goals. I could not put it down.