Getting Out the Vote By Design 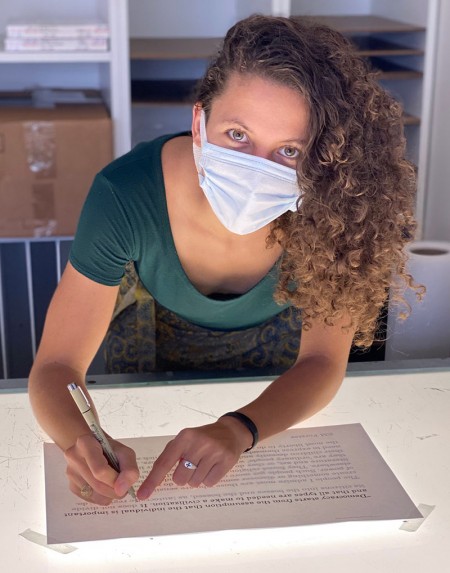 Christina Rigsby hand-lettered two designs for the American Institute of Graphic Arts' Get Out the Vote poster - one in English and one in Spanish.

That’s the premise underlying the American Institute of Graphic Arts’ (AIGA) Design for Democracy. The AIGA’s oldest initiative, Design for Democracy encourages artists and designers to use their creativity to increase civic participation by making democratic choices visually clear – in a nonpartisan way. Each election year since 2000, their Get Out the Vote program has called for submissions for poster designs encouraging people to engage, and to vote. During the year, posters travel to the Democratic and Republican National Conventions and to national museums.

This year, in celebration of the 100th anniversary of the 19th amendment, which gave women the right to vote, the AIGA partnered with the League of Women Voters to invite 70 women from around the country, all prominent artists and designers, to create Get Out the Vote poster designs. Lana Rigsby, owner of the Houston design firm Rigsby Hull, was delighted to be one of the designers invited to participate.

“I was thinking about what to do,” Lana says, “and I thought of my niece, who has lived in the United States, Singapore and Venezuela – a democracy, a dictatorship, and complete anarchy. So I thought, ‘Let’s bring another woman into this and get perspective from someone who has really lived around the world.’” 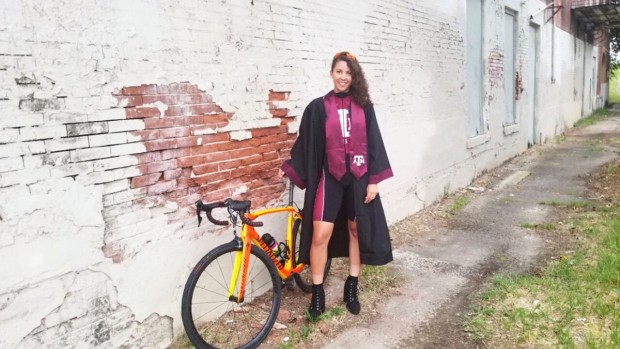 Christina Rigsby was the only woman on Texas A&M's cycling team during her time in College Station.

Lana’s niece, Christina Rigsby, is 23 and working toward her doctorate in applied mathematics at Colorado State University. (Christina also happens to have been the only woman on Texas A&M’s cycling team during her lst year there, a distinction she shared with her twin sister Michelle - also a world-class cyclist - in 2017-18.) “We had had conversations about these kinds of topics before,” Christina says of her aunt, “and I really wanted to get people thinking about how much influence their voice can have.”

“Christina and I thought about what kind of statement we wanted to make,” Lana says. “What would we want to hang up next to our computer?”

They focused more on the message than the graphics. “The design is beautiful and inspirational,” Christina says, “but now more than ever, people need to be thinking about their voice. We wanted to do something thought-provoking.”

So they looked to E.M. Forster, author of A Room With a View, Howard’s End and Passage to India. “He was a huge thinker about democracy,” Lana says, “and he had written an essay I absolutely loved. There was a part we thought was phenomenal because it talked about creativity and how a democracy is where creativity can flourish best. Forster said the people he admired most are those who don’t think in terms of power, but in creativity. It is a quiet, compelling examination of what makes a democracy so good.”

Then they really went outside the box. “I’m a designer,” Lana says. “I want something eye-catching. We looked at putting [Forster’s] statement on top of bright colors and cool designs. But in the end, we decided to hand-letter it. 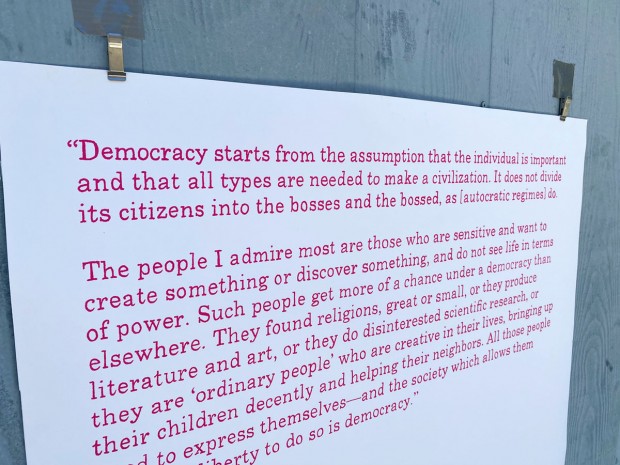 Lana Rigsby was one of 70 women, all graphic designers and artists, invited to design a nonpartisan poster for the American Institute of Graphic Arts' Get Out the Vote initiative. She chose to highlight part of an essay by E.M. Forster on democracy. Get Out the Vote posters are scheduled to go live on aiga.org on July 4.

“I love to do lettering, and Christina is an artist and also loves to do lettering. So I took a chance and said, ‘You can hand-letter it, and we’ll submit it under both of our names.’ She came to my studio with a facemask on, and we spent the afternoon listening to podcasts and talking about democracy while she worked on the lettering.”

Lana and Christina created two versions of the poster – one in English and one in Spanish. “As a Venezuelan-American, and as my mom is Venezuelan, I really felt like it was a privilege to work on the project as a Latina,” Christina says. “It was important to me to do the two translations to encourage the Latina vote and to express our belief that we should all have equal voices.”

Lana says of the project, “We think it’s going to be really different than what other people will submit. I would like to read it and hang it up and reread it.”

Get Out the Vote posters are scheduled to go live on aiga.org on July 4. The 11-by-17 posters are available to the public to download at no cost.

Editor's note: Harris County’s Primary Runoff Elections, for both Democrats and Republicans, take place on July 14. Early voting takes place June 29-July 2 and July 5-July 10. Harris County registered voters can vote at any of the county’s 350+ polling locations. Confirm your registration and find your nearest polling location here or see a full list of all Harris County polling locations and hours here. You can also view your sample ballot here Those over 65 may be eligible to vote by mail. For information on voting by mail, click here.