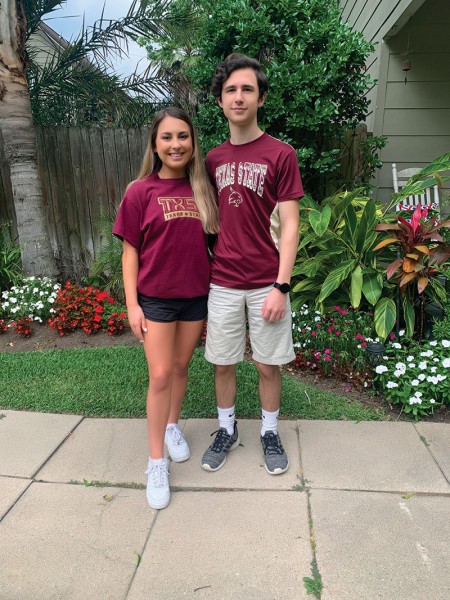 Prom dresses hang in closets, and graduation invitations printed with no-longer-accurate dates haven’t been mailed. Instead of celebrating, the Class of 2020 is trying to make the best of their new virtual world and wrap their heads around the fact that the final semester is ending far from how anyone expected.

As for me, I’m one of the heartbroken moms of a high school senior who is watching him miss all the things he looked forward to for years: prom, graduation, final sports seasons, hanging out in groups of friends, and simply walking the halls of high school with the pride and confidence that comes with being a second-semester senior.

Some Buzz families have not one but two graduating seniors: one in high school and another in college. It’s double the disappointment, but they are making the best of it.

For the Sigmon family, the pandemic cut short three major life events: Lewis’ last semester at Bellaire High School, Jackie’s final semester at Texas State University, and the end of mom Angie’s 30-year teaching career and last semester as a kindergarten teacher at Mark Twain Elementary. “We were planning a big celebration at our house to celebrate both kids and my retirement,” Angie said.

Lewis and the rest of the senior class at Bellaire High School are missing traditions like the BHS senior luncheon, senior skip day, and, of course, prom and graduation. Senior prom has been rescheduled for late July, but, as of press time, an in-person graduation ceremony was still hanging in the balance.

“I hope that HISD decides to do a walking ceremony,” Angie said. “Not everybody is all into prom. Graduation would bring closure to the group and let them meet one more time together and celebrate.” Lewis shares his mom’s opinion and is hopeful for a real graduation ceremony. “I’m chill with no prom,” he said.

Jackie simply misses being on the Texas State campus. “If I had known that would be my last time on campus, I could have said goodbye to my friends and professors,” she said of the day in March when the university administration sent the students home. She is also missing several of the “lasts,” with her sorority formal canceled, along with the final chapter meeting where the seniors planned to give goodbye speeches.

These days the Sigmons are looking for small bits of happiness and spending more time together at home, in contrast to pre-quarantine life, Angie said, when “we are usually all doing our own things, and we’re always scheduled and gone somewhere.” Quarantine has brought enough boredom that Lewis and younger sister Jessica, a high school freshman, are hanging out together and working on puzzles. 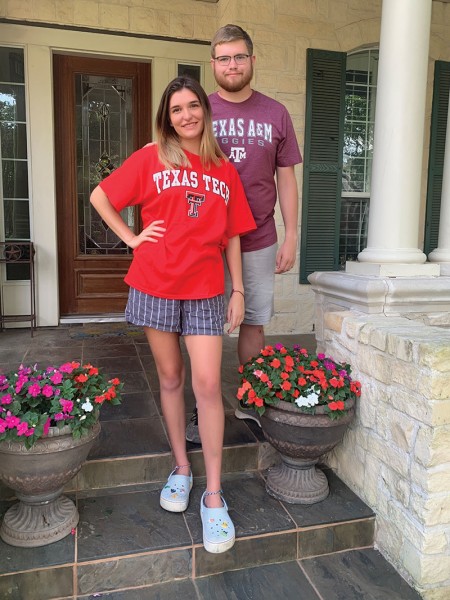 Another Bellaire family also has both a high school and college senior. Luke Cantrell, a senior nuclear engineering major at Texas A&M University, was looking forward to Aggie family weekend. As a member of the Aggie Band and Corps of Cadets, the weekend would mark the final time he would march at A&M. “It’s happened every year since 1917. All these traditions are gone,” he said.

Younger sister Juliana Cantrell says that in addition to the typical senior traditions she is missing at Bellaire High School, she wishes she could still teach swim lessons at the Bellaire Rec Center. “I can’t go to work, and that’s the worst part of this. I have made so many friends there,” she said.

One thing that all of these seniors can agree on is that distance learning is a challenge. Juliana says it’s hard to focus when you’re at home and you think of other things you could be doing. Luke says he’s still productive in his online classes, but it’s not the same. “I don’t feel as involved. It’s more like checking the boxes than sitting down and really learning something,” he said.

Parents Sharon and Kent Cantrell are trying to focus on the positive, and for Kent that means passing the yard-upkeep duties to the kids. “I get the lawn mowed for me, which is great,” he said. “Yes, there’s lots of free labor happening around here,” Sharon said, laughing.

“The situation is just sad, but it is what it is,” Kent said. “It’s really tough on parents of seniors.”