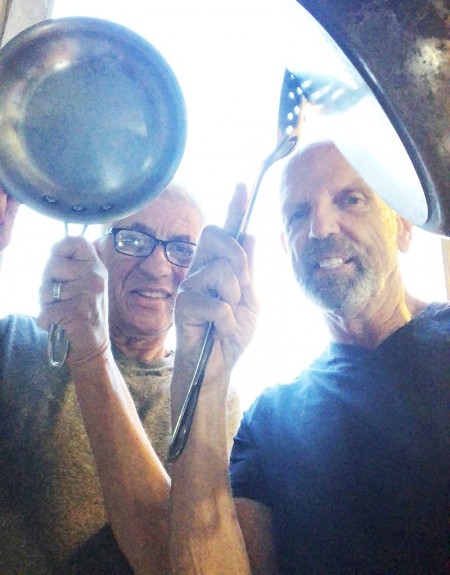 Since March 19, Clifford Pugh (right) and his spouse John Dascoulias have been banging on pots and pans each night to thank frontline workers.

This week’s Name That Tune was a little out of the ordinary. Instead of featuring a musician, we spotlighted Clifford Pugh and his spouse John Dascoulias, who, for the past 85 nights, have been clanging pots and pans from their balcony each night to salute our frontline workers. I connected with Clifford, a veteran Houston journalist, to learn more about his experience. Read on for excerpts from the interview.

Tell me about how you and John first decided to start clanging pots and pans back in March.
When the whole Covid crisis first started, we noticed that in Barcelona and Greece – where John’s grandparents are from – people were banging pots and pans to salute the healthcare workers. John said, ‘Maybe we should do that here.’ We kind of started off one night as a lark. We said, ‘Let’s go out to the balcony of our apartment,’ and we started banging pots for about a minute. After about three nights, we thought, maybe we need to add something to it, so we decided to pick a song to highlight while we banged the pots and pans. We’ve been broadcasting it on my Facebook page live and John’s Instagram page each night.

That’s awesome. How has it been received by the community, both your neighbors and people who might be watching online?
The neighbors – some of them have gotten involved, especially in the beginning. Our neighbors above and below and to the side joined in at the beginning. The majority of our followers have been on the social media pages. We have probably 35-40 regular people who come on [to watch us] right when we start. Then we post the videos after and there can be as many as 500 views, and we have upwards of 100 comments per night. It’s pretty amazing.

Are the viewers mostly people in Houston or from all over?
There are a lot from Houston. Some are my former colleagues at the Houston Post and Houston Chronicle and CultureMap, so it has kind of been a reunion for some of them. I went to Rhodes College in Memphis, Tennessee, and some of the alumni have started joining. Then John’s family in Ohio and Atlanta joins. His mom is 90 years old and joins every night … It has kind of been a way for everyone to check in on each other and just make sure we all are still doing okay.

That’s so cool. I feel like during quarantine people have been able to connect with people who they maybe haven’t been in touch with.
There were honestly some people I didn’t even know, and they come on nightly and we’ve become friends even though we’ve never met in person. That part has been really rewarding.

Do you or John have any musical background?
We do not, and the way we sing it is quite obvious that neither of us has a musical background. I played the tenor saxophone in college, but I haven’t picked up a sax in probably 40 years. John, I don’t, think had any musical talent, although he probably carries a tune better than I do. It kind of surprises me that people still seem to really like it.

Have you previously performed the song you did for The Buzz Magazines’ Name That Tune?
Yes, I have an entire pandemic playlist. We did “I’m Still Standing” [by Elton John] on night 12. It has been fun picking out the songs for each night. People started suggesting songs too. We try to do songs that fit in with the times like “Don’t Stand So Close to Me” by The Police and “U Can’t Touch This” by MC Hammer. Recently, we have shifted to more positive songs given all that is going on with George Floyd. Song like “Where is the Love” [Black Eyed Peas] and “I Say a Little Prayer” [Aretha Franklin]. Some more positive ideas for each night. One other thing that’s been interesting is we’ve been banging pots using spoons, and the wooden spoons started breaking over the course of time. People noticed it, and so they started sending us spoons. We get Amazon packages with spoons. Several of John’s relatives got together and they sent us a stainless steel four-foot spoon a couple nights ago.

That’s too funny. It sounds like this nightly ritual has been something really uplifting during what has been a challenging time for everyone. I’m wondering how it’s impacted your own lives?
It is pretty amazing. It added structure to our lives because every night we’d pick out the song beforehand. Then we’d get a little nervous. We did it out on our balcony, and we have a dolly with a little cardboard box wedged on top of it, so our phones go on there [to record us]. It’s really a rudimentary tech system. Doing it every night has brought us down to earth a little bit … And we always try to go back to why did we do this in the first place. We try to reiterate that it’s all about the frontline workers. They are the real heroes. Even though it might seem a little silly to bang a pot in their honor, it’s making some sort of statement. It has been an uplifting experience – more so than we ever could have imagined.