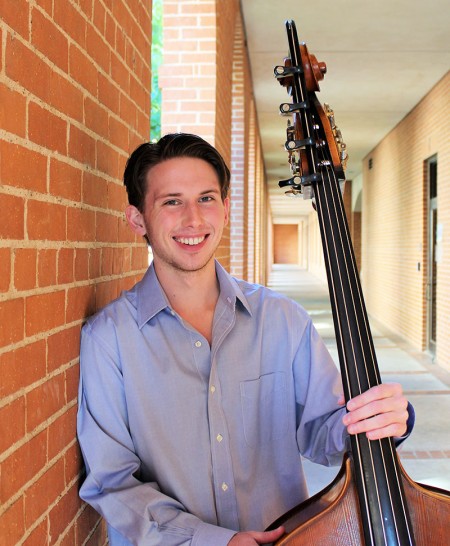 Ian Donovan, 22, is a double bass player who aspires to join a professional symphony one day. (Photo: Jordyn White)

This week’s Name That Tune is brought to you by Ian Donovan, a double bass player who recently graduated from Baylor University with a degree in Music Performance. Ian is also a former Texas Music Festival Fellow and a graduate of Kinder High School for Performing and Visual Arts. We chatted with Ian to learn more about his passion for music and his goals for the future. Read on for excerpts from the interview.

When did you start playing the double bass and how did you get into it?
I‘m in a family of four boys. I have three brothers, and three of the four of us play bass. My older brother picked up the bass in middle school. He started taking lessons, and the teacher would come to our house. I’d always be mesmerized sitting and listening as a seven-year-old. That convinced my parents to start me on cello because I was too small for the bass. When I got taller and bigger, I switched [to the bass].

Do your parents play the bass as well, or what got your brother into it?
We both went to Lanier. And at the orientation, they do a demonstration of the electives, and when the orchestra came out, the orchestra played the Jaws theme. That’s what got him into it. He was just like that’s so cool!

How long have you been playing the bass now?
It’s been about 12 years.

It sounds like you’re very serious about music, since you mentioned you’re also planning to start a master’s program in music in the spring at Rice University. Do you have an idea of what you might want your career to look like or what you might like to do after your masters?
I’ve always really enjoyed playing in a symphony. That kind of feels like home to me, and that repertoire really speaks to me. So being in a professional symphony would be a goal. And then teaching at a college has always really interested me too.

What is something that people don’t know about the double bass or that you’d want to share with people?
I guess the first thing that comes to mind is that it’s not as heavy as it probably looks. Whenever I walk around with it, people are like, ‘Oh wow that must be so heavy!’ But it’s hollow on the inside so it’s not too bad. It also has so many colors I can make with the instrument. There’s so much resonance that can be produced. I think people are always amazed when they hear it and realize how much one instrument can do in terms of tone and resonance.

What are you up to these days? Are you still taking lessons, or more on your own?
I’m kind of in between teachers now. I’m just working on my own right now, but when I go to Rice I’ll start taking lessons with the teacher there.

You mentioned that you’re currently preparing for the Master’s program. What does that entail?
I think it’s a lot of maintenance work. There’s an analogy in the community that you brush your teeth every day, and there are similarly certain exercises that you do on the bass that are kind of like brushing your “bass teeth.” I’ll also be preparing for a recital that I will have to give for my masters and then also I will be doing orchestra auditions, so trying to start preparing for those.

For Name That Tune, you played Danny Boy. Why did you select that song?
Well, my middle name is Daniel. But on a more serious note, I just think it’s a really pretty tune. I know my grandpa loved that tune, so it’s always held a special place in my heart.

What is it that you love about music and the bass that has kept you playing it for so long and that makes you want to continue?
I think there’s a part of it that’s the community, the really supportive community that I’ve been a part of. But I also think it’s the natural form of expression that is available that I find nothing else really matches. What’s kept me in it and made me not want to do something else is that the feeling I have when performing, I really can’t mimic anywhere else. That natural sense of expression and also the adrenaline and excitement that goes into a performance that I think is one of a kind.

Are there any ways that playing music has helped you in other areas of your life?
Yes, I think the thing that music has taught me the most is work-ethic and diligence with that. And also just the idea that there’s always more you can do, so striving for excellence rather than mediocrity.