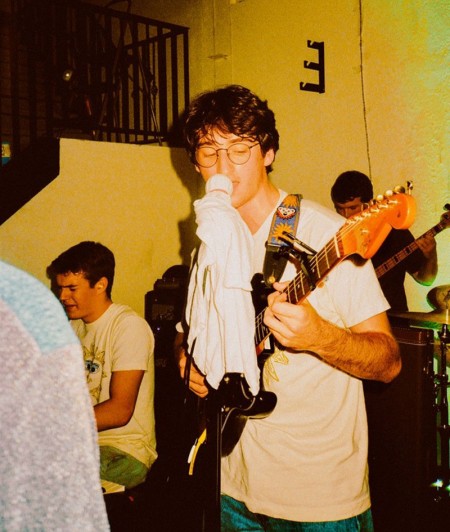 Scotty Malcolm is a 2020 St. John’s grad with a passion for writing and producing music.

This week’s Name That Tune is brought to you by Scotty Malcolm, a 2020 St. John’s School graduate with a passion for music, songwriting and performing. Down-to-earth and teeming with creative ideas, Scotty has released multiple tracks and is working on another project as he prepares to begin an undergraduate music program in Boston this fall. Read on for excerpts from our interview with Scotty.

Tell me about how you first got into music.
I got my first guitar when I was probably in third grade. I remember the day I got it, I was trying to learn movie scores, like James Bond themes. Eventually, in fourth or fifth grade I started playing around with it more and started learning chords. And then in middle school, my dad started showing me rock music and guitar solos and I got into that. Eventually, I started playing all kinds of stuff like jazz. As I started listening to different kinds of music, my style changed over time.

How did you make the decision to pursue music academically after high school?
I can work hard in other things, but the only thing I really enjoy working hard in is songwriting and recording. I figured if I was going to work hard in something, it might as well be that.

Can you tell me a little more about the program you’re going to start in the fall?
For this year, I’m pretty sure I’ll be taking all the base classes like music theory. Next year, I’m going to decide my major, and I think I’m going to do songwriting.

Very cool. Have you done a lot of songwriting on your own?
Yeah, I usually record on my own a lot and write songs … That’s my favorite thing to do. I also really like the recording process. [Note, you can check out Scotty’s music on Spotify or SoundCloud. He has released an EP and is currently working on an album.]

What do you use as inspiration when writing music, and what’s your process like?
I always liked the idea of making a song. That’s my inspiration, I guess. I kind of get into this weird zone where I’m so focused on it. I just get really focused and into the music. In terms of process, I used to write the song and produce it at the same time. I’d figure out what the song was going to be as I was producing it. Now, my process has changed. I write the song – playing it on the guitar and writing the lyrics in my journal – sometimes with a friend. Then, I’ll go over to my friend’s house – he has a drum set – and I’ll explain the song and play it for him. I’ll record the drum track and put it into GarageBand. And then I’ll record everything based on that drum track.

So you also play the drums, and you mentioned earlier that you play bass and piano too. How did you pick up all these instruments?
For guitar, I took lessons for a couple years, but I didn’t take it too seriously. I didn’t start to really learn guitar until I researched different chords and stuff. Bass is very similar to the guitar. With drums, I’d just go play at school in the band room and try to figure it out. Piano I also kind of figured out on my own. I did take some lessons when I was little.

What about singing?
I think I started singing sophomore year. I just started doing it. I think I’ve gotten a little better over time. I’m starting to figure some things out. It took me a minute to get comfortable at shows and singing in front of people. I took some voice lessons at the end of last year and that has helped.

What do you want to accomplish as a musician?
I’d like to play more shows and tour. [My band] was supposed to play in Austin and that didn’t happen because of [coronavirus]. I’d like to tour with my band and get some more listeners.