The rusty Pied Piper of quarantine 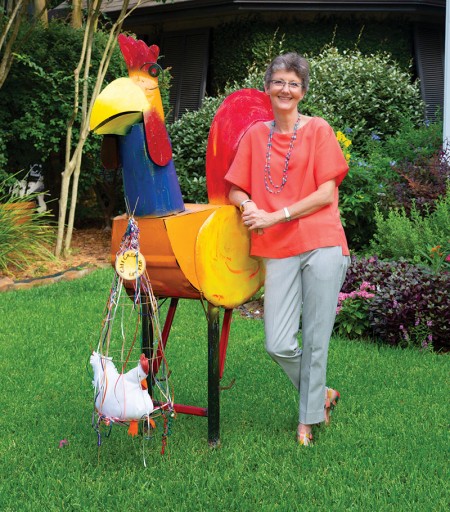 It all started with an old, rusty rooster named Ramon. The five-and-a-half-foot tall metal fixture was an impulse buy at H-E-B over a decade ago. When she bought it, Amy Barnes had no idea Ramon would earn celebrity status and become the thing that brought her Sunset Terrace neighborhood relief during a global pandemic.

In fact, after spending years standing tall in Amy’s backyard garden, Ramon was headed for the dumpster. His once-bright yellow and orange facade had faded, and seasons of moist Houston summers had corroded parts of his body to rust. He no longer stood stable on his feet; instead, he creaked and was in danger of falling over. Worried he might tip over and injure someone, Amy leaned the rooster against the fence on the side of her corner home.

“He was sad and rusty,” says Amy, co-founder of the nonprofit Books Between Kids. “I was honestly thinking he was going to be trashed.”

Amy’s neighbor, Steffy Clingan, was walking her two dogs when she turned the corner and saw Ramon propped up against Amy’s fence. The forlorn rooster reminded her of Chicken Little, known for sending his town into a frenzy by claiming, “The sky is falling!”

“It just made me think, there is so much fear and trepidation around Covid-19,” says Steffy, an interior designer who has lived in Sunset Terrace, an enclave within West University, for over 30 years. “I just thought we needed to do something fun that gave parents a distraction for their kids and for themselves.” Steffy, who turns 60 this year, says she noticed that parents with young children seemed like “deer in the headlights” as they navigated working from home and homeschooling their children.

Steffy’s idea was to create a daily scavenger hunt for kids and their parents that would be centered around Ramon.

With Amy’s permission, Steffy and her husband, Scott, loaded Ramon in the back of their car the next day. It so happened that a plumber was installing an HVAC system at the church the Clingans attend (Bethany Christian Church), and the plumber happily agreed to mend Ramon using the bright red brackets he had on hand.

“I’m telling you, God just put all of this together seamlessly,” Steffy says. “The brackets were the perfect size. They were just the width between the bird’s legs and the right angle to weld it into the un-rusted part. Now, Ramon was standing just beautifully, and I thought, well, this is great.”

Within the next 48 hours, Steffy’s idea to create a daily scavenger hunt came to fruition. Each day for the next six weeks, Steffy came up with a list of items around the neighborhood for people to find. She stationed Ramon in her front yard and, each day, hung a sign on his neck indicating which street they could find Chicken Little on.

Because Ramon was too cumbersome to move around the neighborhood, Steffy sewed a Chicken Little stuffed animal and decorated it with ribbons. She placed it in a tomato cage, which functioned as the chicken coop. Each night she moved Chicken Little to a different household in Sunset Terrace, which encompasses a little over 200 households bounded north and south by Westpark and Bissonnet and east and west by Edloe and Weslayan.

Attached to Chicken Little’s coop each day – in a gallon-sized Ziploc bag to avoid getting wet – was a piece of paper with the daily scavenger hunt. Kids, and even some adults, would take a photo of the list and then off they went, hunting for the items, from items in nature like butterflies and hibiscus plants to stuffed animals planted in windows or in the front yards of specific households. 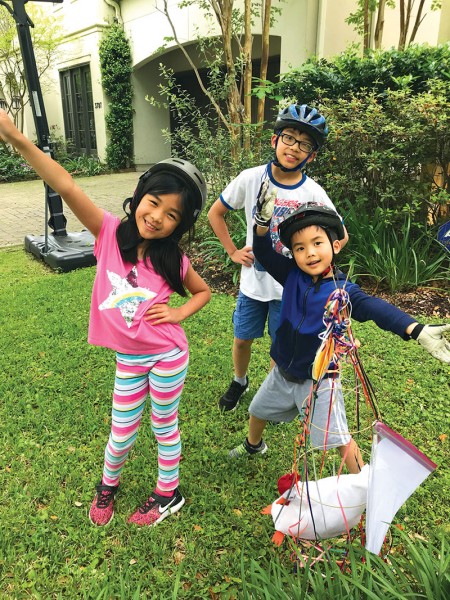 Siblings Kelsey, Toby and Jesse Yip rode their bikes around the neighborhood each day in order to find Chicken Little, who held the scavenger hunt list.

For families with young children, the scavenger hunts became a fixture of quarantine life.

“It was one of our daily highlights,” says Patrick Yip, a Sunset Terrace resident who works in private equity. “We really enjoyed having that adventure every day.”

Patrick had been working from home while his three kids, Jesse, 5, Kelsey, 8, and Toby, 10, were home from school. Balancing home-schooling with their own work was challenging, says Patrick and his wife, Vicky Yip. The scavenger hunt was something the kids looked forward to each day.

Around lunchtime, the kids would hop on their bikes, with Dad jogging behind them, and ride towards Steffy’s house. There, they’d see Ramon and find out what street Chicken Little was on. They’d race to that street, and over the next 15-30 minutes, the siblings would ride their bikes up and down streets searching for the items on the list.

After six weeks, the weather was beginning to warm and Gov. Greg Abbott announced plans for reopening the state. Steffy was tired and decided it was time to end Ramon’s chapter.

“Everything has to come to an end,” she says.

She explained to her neighbors that Ramon had to go back home to his mom, Amy Barnes, for Mother’s Day on Sunday, May 10. She hadn’t realized just how attached some kids had grown to Ramon – until the day after Mother’s Day, when Ramon no longer stood in her front yard.

“By noon on Monday, I had four different families out front with crying children on the sidewalk,” said Steffy. “One little girl was just screaming ‘Oh my gosh, where’s Ramon?’”

“I wondered why it was so upsetting,” says mom Vicky, whose daughter Kelsey was one of the sad kids. “But I think it meant a lot to them because it gave them some sense of routine. It’s the loss of something that took an important place in their lives when all this first started. We’re really grateful the organizers did it for this long.”

To say the activity took creativity and time is an understatement. In addition to coming up with the scavenger hunt every day for six weeks – that’s 42 unique scavenger hunts – Steffy also came up with a “craft of the day,” along with a game or exercise that she posted on the neighborhood’s social media pages.

All the while, neighbors were becoming increasingly involved. One neighbor, artist Joe Culotta, volunteered to give Ramon a much-needed paint job. Others judged an art contest that Steffy created, where kids submitted art about Ramon. Other neighbors scoured their closets and garages for items that could work for the scavenger hunt, which often was centered around a theme, like rodeo or space.

“We all spent time digging through our closets and finding things we hadn’t seen in years to help support the scavenger hunt,” said Cristal Roth, a Sunset Terrace resident who has three adult sons. “We found a stuffed Pikachu to put in the window, plus a giant Herbie Love Bug. My boys had soccer jerseys from Germany and Spain, so we put those out for international day.” 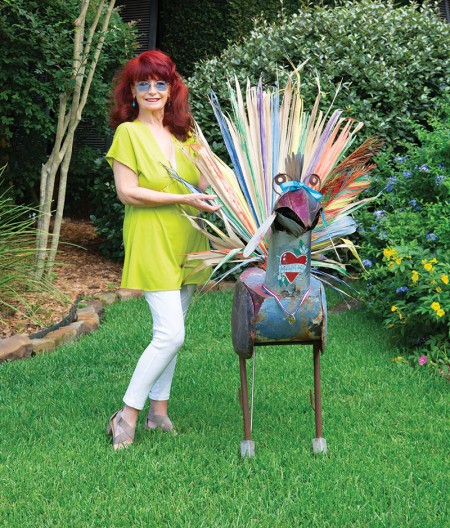 Steffy also initiated a weekly vigil called “Shine the Light” on Tuesday evenings. At 8 p.m., everyone in the neighborhood was invited to stand on their curb with flashlights or other lights to honor those helping out during the coronavirus pandemic.

The first vigil was to honor neighbors who are medical staff. Ramon was front and center, dressed in scrubs and a bandana as a mask. Another week was for high school seniors, and Ramon was dressed in a cap and gown.

Although the scavenger hunts are over and the final Shine the Light night is in the books, Ramon’s journey continues.

In early May, Steffy went over to neighbor Lucy Keeper’s backyard to pick up an item for a scavenger hunt. In Lucy’s backyard, Steffy discovered a metal rooster that looked strikingly similar to Ramon, just smaller.

He was rusty and faded. His feet were bent, and he was missing a tail. “Let’s make him Ramon’s younger brother,” said Steffy.

Steffy created Rocky. According to her tale, Rocky ran away from home and went all the way to New York City, where he got into trouble; meanwhile, Ramon had been writing him letters to come back to the neighborhood.

Lucy, 75, loved the idea and loaned Steffy her rooster. Now, residents of Sunset Terrace can volunteer to “host” Rocky in their front yard for a week at a time. While they host him, they can write the next chapter of his story, or add a piece of clothing onto him – anything to keep the neighborhood adventure going.

Ramon meanwhile, is happily restored and back home. Amy, who at one point was ready to discard her old giant metal rooster, now feels a new sense of responsibility as Ramon’s owner. She’s still trying to find a “sacred” place to keep him.

The other day, a child was peeking through Amy’s fence and was dumbfounded. “Do you know you have Ramon in your backyard?” the child asked Amy’s husband, Alistair.