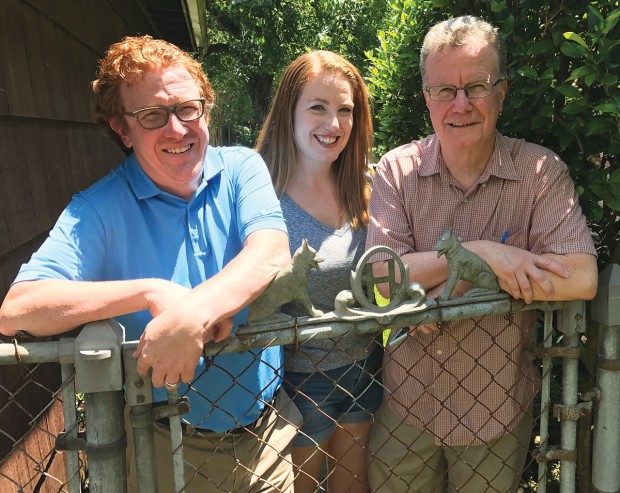 GOODBYE TO A HOME Siblings Joe and Allison Harris visit the childhood home of their dad, John Harris (at right), for what turned out to be the last time in July 2017. On their next visit, they helped remove ruined belongings after Hurricane Harvey. Today the “H” on the gate hangs near John and wife Janie’s front door at their Austin home.

I miss Harvey. I don’t mean I miss the 2 feet of ugly floodwater in the 2-bedroom, 1-bath postwar house where I grew up that had never flooded since my late parents bought it in 1950.

Nor the destruction Harvey left, forcing us to drag smelly carpet and furniture to a wall of soaked junk lining our Bellaire street. Nor the tears shed when our two grown children saw it. Nor the loss of the SUV I’d just bought for my wife after she retired from decades of teaching.

And not the inevitable sale of the property we never wanted to lose.

The goodwill started minutes after water sneaked under the front door that Sunday morning of Aug. 27, 2017, and invaded the yellow 1970s carpet that my parents had installed over the original hardwood when I was in high school. (Nancey Harris loved yellow.) Water quickly poured through every wall. I texted my wife Janie, who was in Austin, and called our neighbor Jesse, whose new house next door sat higher and drier. Jesse waded over with brilliant ideas: Put the dining chairs atop the SUV in the garage, carry the two family chairs that probably survived the 1900 Galveston storm to his house, put heirlooms on high closet shelves and shut off the power.

We sloshed to his family’s house. We stacked their furniture and moved stuff upstairs in case water flooded their home, too (it only reached their garage). Later we sat at his front steps, chuckling at the sight of the tiny wake that lapped near our feet as a Red Cross dinghy motored by.

The next morning, the water was gone, my house drained and the front door open. Jesse and I walked silently inside. First we saw the debris line at 26 inches on the wall. Then the ruined piano, ruined couches, ruined beds, ruined cabinets and files, and ruined appliances – all of it scattered out of place in the ruined house that was no longer practical to repair, that in the back of my mind I knew we’d have to sell for lot value, later.

Janie arrived from our home in Austin a few days later. (Austin was home base. I returned there for weekends after working weekdays in Houston at my full-time job.) Jesse and his wife Ilene and their two sweet daughters put us up for a week next door.

Cleanup commenced. And everything changed.

People showed up: neighbors I’d never met, friends I hadn’t seen in a while, friends of our children, friends from church and Scouts and work. They ripped soaked carpet and dragged it out. They brought pickups and food and took what furniture we salvaged to Austin. Our kids’ friends met them there with strong arms and cold beer.

The next several days it happened repeatedly. Strangers appeared, with barbecue from grills on their driveways. Janie and I walked the neighborhood and saw people sharing food, pulling Sheetrock from houses they had never before entered, and doing their neighbors’ laundry, on street after street after street.

We moved for Week 2 to a cozy B&B and got to know its young owners. Janie returned to Austin, and I stayed for Week 3 with my cousin Nan, sharing family pictures and telling old stories. Week 4 took me to friends Jeff and Suzy.

I retired to Austin full time. We returned sporadically to go through what was left. We stayed in our friend Sharon’s vacant apartment in Montrose and strolled its neighborhoods, cheering on the Astros in a different bar each night as they took the World Series.

Three years later, my old neighborhood is back to normal but with subtle differences. Neighbors talk a bit more. They stop and visit. They will help each other again after the next disaster.

The dining room set with those chairs that we moved to the car roof was spiffed up for our daughter Allison’s townhouse. Mom and Dad’s mahogany bedroom suite and their 1948 Magnavox radio cabinet-turned-bar were rebuilt for our son Joe and daughter-in-law Erin’s home.

As more 1950s houses were cleared, ours sat quietly and awaited its turn. Last year I sold it to our helpful neighbors, who cleared the lot to make a huge yard where kids and pets play and run again.

Telling that house goodbye once seemed inconceivable. But now I close my eyes and imagine every inch of the old place. Now we can sleep on my parents’ bed and sit at their table in our children’s homes. We’ll remember the good times in the vanished little Bellaire house and the angels who helped us in the sweet days we miss in Harvey’s wake.