Name That Tune: Will Derden 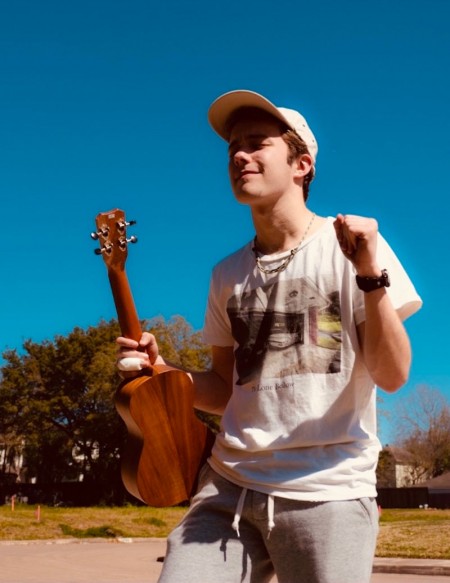 Lamar High School grad Will Derden, aka Wednesday Kid, is a singer/songwriter and guitarist who’s headed to University of Texas at Austin this fall.

This week’s Name That Tune is brought to you by Will Derden (aka Wednesday Kid), a singer/songwriter and guitarist who’s headed to University of Texas at Austin this fall. Since Will graduated from Lamar High School this year, he’s been focusing on writing music. Read more about his music through excerpts from our interview here.

Tell me a little bit about your interest in music and songwriting.
I’ve been writing music for as long as I can remember. I started playing guitar a long time ago and recently picked up piano. But I never considered releasing my music out to the public until this year, when a friend of mine formed a band and said to me, “I’ve listened to your music and there’s no reason other people shouldn’t too.” That was right after Christmas break, and I realized that [releasing my music] is something I want to do. I started uploading demo tracks to SoundCloud. It’s nothing fancy – just me singing and playing the guitar with original songs. I went by the name Wednesday Kid. I can tell you about that name.

Yes, tell me how that came to be!
It’s sort of a funny story. My friends and I were trying to come up with music names for me because I didn’t think want to go by “Will Derden.” I didn’t think that was a very musical name. Eventually, we became so desperate, and I thought, what if I go by a day of the week? What if I just go by Friday? All my friends said “No, no, no. You’re way more of a Wednesday kid.” I was like that’s it! That’s what the name is going to be!

That’s so great. So now you’re releasing music on SoundCloud?
Yes, so I also have one official release on Spotify, and I have music on all the regular streaming platforms. I have another one that’s going to be dropping on Aug. 9. [Find Wednesday Kid on SoundCloud, Spotify and Apple Music.]

What’s your music about? Is there a particular focus or inspiration?
I guess the sort of vibe is pretty child Indie singer/songwriter style of music. I derive a lot inspiration from Jack Johnson. I kind of write music in a similar vein. The idea I go for is simple songs for complex problems. I want to write songs that are easy and laid back but that are about real problems people struggle with. Not every song has to be about some huge world issue. I’ve released a song recently called “Oversized Socks” which is just about how messy my room is in the time we’re living in, and that’s the song that has the most streams on SoundCloud.

And in terms of learning to play the guitar and sing, did you get formal training?
I did get formal training in the guitar. My parents made me take guitar lessons when I was 8 years old. I went into it begrudgingly because it was really hard for me at first. After a couple years of doing that I picked it up. Piano I didn’t have lessons in, I’ve just watched YouTube videos and play by ear. I wouldn’t say I’m great on piano at all. Singing – I tried to briefly take voice lessons, but it didn’t work out. I just have always been singing. My mom has an amazing voice. She didn’t pass that down to me necessarily, but I have something.

You have a lot of cool and different interests – singing, songwriting, playing guitar, and then you’re also planning to study theater and advertising. Do you see music being a potential career or do you view it as a hobby?
I think anyone who’s really passionate about music would like to see it as a career, but we also understand it’s not easy to just jump right into a career playing music. That’s a risky thing to do. I definitely prioritize my academics more. Next year, I’ll be in Austin, the live music capital of the world. Hopefully I’ll have unique opportunities to play over there. But unless the music really starts to take off, I’d definitely say my academics and school life are my priority. That being said, I’d never want to stop playing music.

Are there any particular artists you like a lot right now?
Definitely Jack Johnson as I mentioned. I also really love Leon Bridges and I like Dayglow a lot. One that I love, and I’d love for more people to listen to, is The Lone Bellow.

I also wanted to ask you about the music scene in Houston. Obviously, things are different because of the pandemic, but are there spots you like?
The thing I love about the Houston music scene is that it knows it’s not Austin, but there’s still so many young musicians trying to make it who I’ve met since the time I started making music. There are all of these house concerts. Before the pandemic there were so many – someone would just say “I’m going to have a concert in my backyard” and suddenly you have 100 people in someone’s backyard. People just love supporting their friends and there’s this network of underground teenage musicians that I didn’t even know existed. I kind of got adopted into that, and I didn’t ever expect to find a community.

Editor’s note: Keep up with Will’s music by following him @wednesdaykidofficial.

Rainbow on the Green