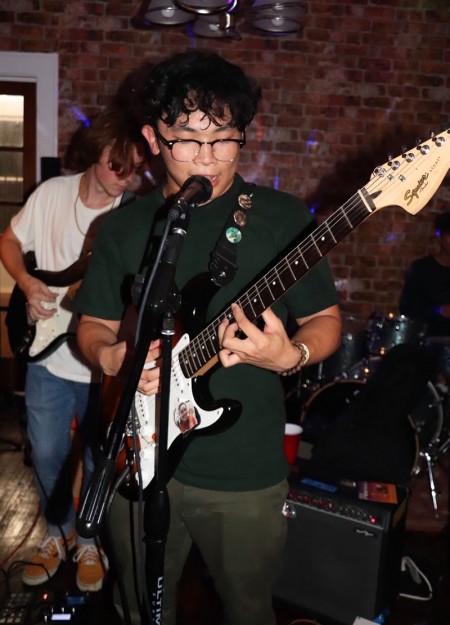 Zak Pham performs with his band during a house party prior to the pandemic. (Photo: Ashley Thompson)

This week’s Name That Tune is brought to you by musician Zak Pham, a 2020 Bellaire High School graduate and an incoming freshman at The University of Texas at San Antonio. Zak, who grew up in Bellaire, now focuses on guitar and songwriting, and he also dabbles in piano, bass, drums and ukulele. Read on to learn about this talented teen’s pathway to music and where he plans to take his creativity next.

Tell me a little bit about how you got into music and particularly playing the guitar.
I got into guitar because my sister Zoe started playing from a super young age and already knew so many things about music. We had the same interests, and I was in fourth grade and was like why not? I started learning it and just kind of picked it up.

Your sister Zoe – is she older or younger?
She’s two years older than me and she goes to the University of Virginia.

And did she teach you to play the guitar, or did you take lessons? I’m curious how you picked it up.
I kind of knew four chords on my own, and then really, I picked it up by listening to my favorite music. I wondered, how can I do that? I had learned piano before and that helped me with guitar as well. And then I joined a punk band and played bass and that helped me learn the basic movements. From then on, it was basically me in my room playing different chords and learning from different bands I like. In the meantime, I was also working on writing music.

Wow, so you really taught yourself and were inspired by the music that you like. Can you tell me more about the band you mentioned?
The first band I was in was with my sister Zoe and her friend Quiana. It was a three-piece band [called No Ghosts], and I played the bass. It was punk music and just a lot of fun. We released an album two years ago on Bandcamp and played a bunch of local shows. [Find their album “Aw, Rats!” here.]

You also mentioned a second band that you play in. Can you tell me about that one?
For a long time, I had been trying [to form a band] with my friend Davis Evans who I know from Horn Elementary – he’s been with me my entire life. Basically, we’d try different bands with different people, and it just wasn’t working. Then one day, I think it was in December 2018, we were thinking that we really want to make a real band. One that has value. Both Davis and I knew people – we both knew someone who was good at bass and he knew someone who was good at drums, so we said, why don’t we speak to people we know? So we did that and we made this band called April Company. It’s a jazz-indie band. I play vocals and guitar. Connor Oelsen plays bass. At the moment we don’t have a drummer, but before it was Nino Aiyer. When you find a good band, you know it because it melds together. I started producing and recording in the bedroom. We got a lot of plays on Spotify and Soundcloud surprisingly on the day we released.

How did you go about figuring out how to release and produce music? That’s not something I’m too familiar with.
A lot of the things in music that I’ve learned is self-taught. I’m grateful to have grown up in a great community of artists and musicians who also were producers, and they had done this before. They inspired me to want to do this. I’ve been trying to figure out this producing thing for quite a while. I wanted to make my own music, and I wanted to figure out how to do it myself because I think it’s better to be skilled than to have someone else do it for you. Basically, at the beginning it was just me and a mic and a guitar. You just layer on everything else.

How is the band managing during the coronavirus pandemic?
At first, we started having car-quarantine. We’d show up to a parking lot with acoustic instruments and spitball ideas six feet apart. We are trying to release an album and record it even during the pandemic. The way we do it is I call [bandmembers] to come over on different days and record.

That’s so creative. And you’re still able to make music while social distancing. I have a couple more rapid-fire questions. First, who is your favorite musician right now?
Right now, probably Carter Ace or Frankie Cosmos.

What type of music do they make?
It’s really soft pop rock.

What would you like to do after you graduate from college?
Ideally, get a job and also keep producing. The dream is to be a sound engineer and be able to produce and mix people’s music. I know I want to work in music.

See which song Zak played in Name That Tune here.

Editor’s note: In addition to bands April Company and No Ghosts, Zak releases music solo on Spotify. You can find his music here.