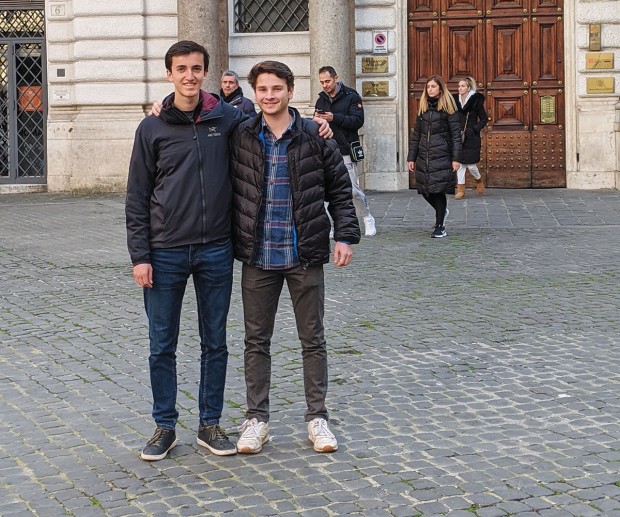 CARPE DIEM Luca Cohen and Blake Myers (from left) explore Rome during the spring semester of their gap-year adventures, before the pandemic brought them home to Houston.

It wasn’t just the pandemic that made this past academic year nontraditional for Luca Cohen and Blake Myers. Both of these Emery/Weiner School graduates had a different kind of education.

They traded lecture halls for experiences: trekking through Nepal, working in a fruit stand at a Bolivian market, learning to play a stringed instrument called a charango, and visiting the birthplace of the Buddha.

It’s called a “gap year,” and while it’s not the norm, more kids are following the trend. The idea is to delay enrolling in college by a semester, or an entire year, to pursue a personal goal. It could be a study-abroad program or an international volunteering opportunity or even an internship.

Some teens need extra time to decide which college program is the best fit, and others want to take the opportunity to do something in the once-in-a-lifetime category and seek out unique experiences before entering college or joining the real world as an employed adult.

Like almost everything else in 2020, Luca and Blake’s gap-year programs were cut short. But they say their experiences were worth it. 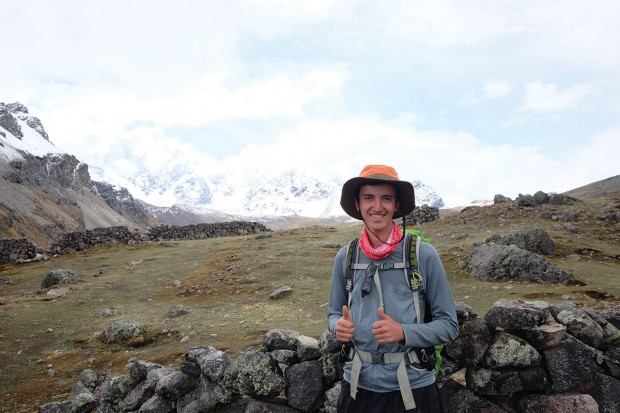 Luca Cohen treks through the Cusco region of Peru, where Mount Ausangate stands more than 20,000 feet above sea level.

After Blake graduated, he decided to put his formal education on hold. “I didn’t feel ready to go back to school again,” he said. Blake’s mom, Lisa, suggested looking into a gap year. She says Blake is an extremely good student and hard worker, but he was worn out and tired of school by the time he graduated. “We would rather buy a year of growing-up time so he can be excited about college than him going and maybe not having a great year,” she said.

He enrolled in a gap year/study abroad program called Where There Be Dragons and traveled to Nepal to live with a local family. “The home stays were my personal favorite part of the trip,” Blake said. “Living with a Nepali family let me really see what their lives were like.”

Lisa is not surprised that Blake chose this adventure. “He loves to travel and has no anxiety about it at all,” she says. “He takes risks, and really would take on just about anything.”

As part of his course itinerary, Blake spent 10 days in a Buddhist monastery, where he lived with monks and followed their daily schedule. He also traveled to Mustang, an area high in the mountains that was once part of Tibet, went on a 16-day trek, and visited the birthplace of the Buddha.

“The change in him has been huge. He’s more mature with a broader view and appreciation of things,” Lisa said. “Travel has given him a whole different perspective. Living in Nepal piqued his curiosity to learn more about different Eastern religions, and he’s much more interesting and worldly.” 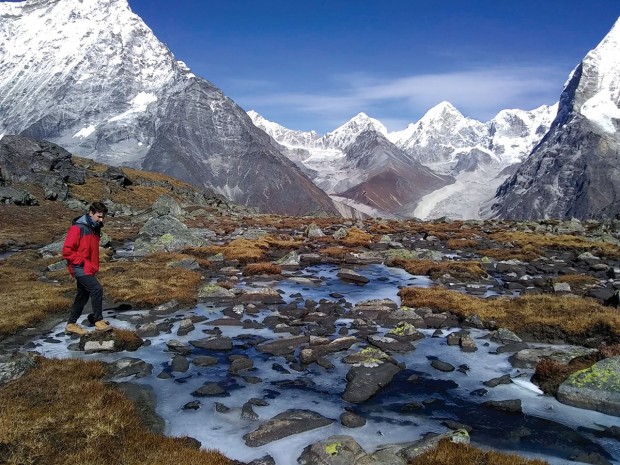 Blake Myers journeyed to Nepal during his gap year, where he trekked through mountainous, icy regions in an area that was once part of Tibet.

While Blake was trekking through Nepal, Luca was having his own international experiences in Bolivia and Peru. Also enrolled in the Where There Be Dragons program, Luca spent the fall with a group of 12 students and three instructors in a South American cultural immersion program.

“I lived with a Bolivian family for a month, and learned all about their culture and everyday lives,” Luca said. During his stay in Lajastambo, Bolivia, Luca lived with a family who made their living selling fruit at the local market. He helped load and unload the trucks of watermelon, oranges, apples and bananas, and also helped sell the fruit.

When he wasn’t at the market, Luca took Spanish classes and learned to play the charango, a 10-string Andean instrument similar to a ukulele. The charango instructor taught some traditional Bolivian songs, and then Luca and the other students decided to blend American culture with Bolivian music and created their own rendition of Frank Sinatra’s “Fly Me to the Moon.”

Luca is not the first in his family to take a gap year. His older brother, Alessandro, made the same decision a couple of years ago, and delayed college to spend time abroad. Their mom, Alison Jefferies, says the experience is invaluable. “We were hoping that with a gap year Luca would learn to step out in ways that he hadn’t up until that point,” she said. “You don’t need to feel especially brave or confident. You just need to want to experience something different.”

When the fall semester wrapped up, Luca and Blake came home for winter break. After spending the holiday season at home with their families, they left for the second half of their gap year. This time, they traveled together to Italy to spend the spring semester learning to speak Italian, cook Italian food, and take classes at the British Institute of Florence.

Luca’s grandparents live in Italy, and the boys moved into an apartment about 20 minutes away. “During my time in Italy, Blake and I would frequently take the bus from Florence up to my grandparents’ house in the country to share a meal,” Luca said. “It’s an old stone farmhouse surrounded by olive fields that are used to make olive oil, just outside the town of Fiesole.”

His grandparents, who have written two cookbooks, showed the boys how to cook authentic Italian dishes. “We usually visited them once or twice a week, and when they came into Florence, they would give us a call to see if we could meet up,” he said. 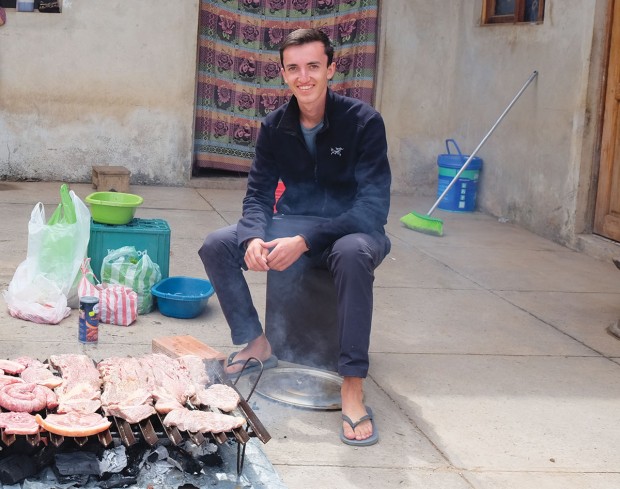 Luca also traveled to Bolivia, where he lived with a local family, selling fruit in the town of Lajastambo. Here, he’s pictured grilling meat for a family birthday celebration.

Their time in Italy was meaningful but brief. After settling in to their new home, the global pandemic changed everything. “We were going to start cooking classes, and then spend time travelling, but we had to leave,” Luca said. “The virus was spreading and it was really concerning because Italy was one of the first major hot spots.” When countries started closing their borders, the boys decided it was time to go home.

Their journey back to Houston took them on a series of connecting flights from Florence to Rome, then to Berlin and on to Chicago. When they landed at O’Hare Airport, they spent four hours with hundreds of other international-arriving travelers, going through customs and health screenings with temperature checks and coronavirus-symptom questionnaires. Finally, after missing their connection and spending the night in Chicago, Blake and Luca arrived home in Houston the next day.

Even with the program being cut short, Luca says it was a great experience, and his mom agrees. “When the boys returned from the gap year, they were both so filled with awe about the world,” she said. “As a parent it was joyful to see how confident they are, interested and engaged on a multitude of topics, and comfortable in their own right. They really became independent.”

Alison says if you are looking into a gap year, take the time to research different programs to find the best fit. International programs can rival the cost of college tuition. “We viewed it as an additional year of education,” she said. “Education comes in many forms.”

Most international programs, including Where There Be Dragons, are on hold right now, waiting to see what happens with the spread of the virus and travel restrictions.

“While we were discussing the whole idea of a gap year when Alessandro was looking into it, we learned that having a structured program is really important. You don’t want to just send them off. They should be part of an organized group of kids their own age,” Alison said.

Chris Reed, executive director of admissions at Texas A&M University, agrees. “If students are going to defer, then doing a structured program is critical,” he says. “If it’s a really great program that prepares you to be a better student, then that’s a valuable experience.”

A common question among high school students is when to apply for a gap year. The most popular route is to apply and gain acceptance to college first, and then follow the school’s process for requesting deferred enrollment. That way, you have access to your high school counseling department to help you apply, and you won’t spend your gap-year adventure trying to juggle the admissions process.

With uncertainties stemming from the pandemic, Reed says he expected to see a big jump in deferral requests, but it has not happened. “We assumed more people would hold off, but it’s actually turning out to be the exact opposite,” he said. “Everything feels so uncertain, so the certainty of starting college feels much more stable, and that is appealing for many students.”

Reed suggests planning ahead and researching how time off could affect your college-course track. “Some classes are only offered either in the fall or in the spring, and you need to plan around that,” he says. “For example, if you defer enrollment by one semester and arrive on campus in January, you may miss out on the opportunity to take a fall-semester prerequisite class that you have to complete before taking the next class during the spring semester. In those cases, if you’re not on campus in the fall, you will have to sit out a year to get that prerequisite completed.”

For Blake and Luca, taking a gap year was the perfect beginning to their post-high school lives. Armed with a year of personal growth and new experiences, Blake plans to attend the University of Toronto this fall and follow a liberal arts curriculum before declaring a major, and Luca is headed to Colorado School of Mines to study engineering. For them, college was always the plan. Just on a different timeline. “What’s the rush?” Blake asked.