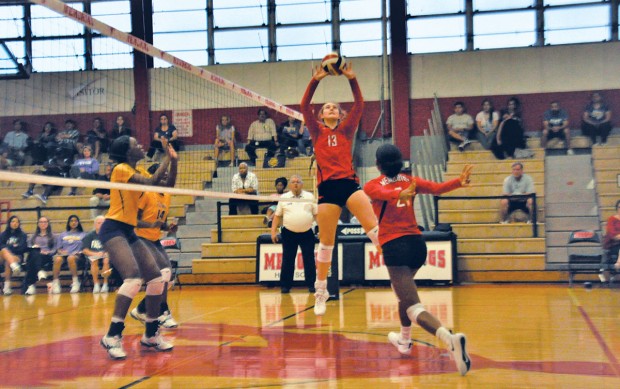 READY, SET Memorial High School District 17-6A MVP setter Logan LeRoux sets up teammate Taylor Odum for a spike in a match from last season. The standout duo are among several talented returning starters for the Mustangs.

With the pandemic, local high school sports teams have been forced to make major adjustments and delayed starts to their seasons.

“It’s really unprecedented on how to move forward,” said Memorial Mustangs head volleyball coach Kaddie Platt. “We were anxious and excited to start the year, and all we can do is remain as optimistic as possible.”

Platt has plenty of reason to be optimistic about her team, with an outstanding lineup of returning seniors. Outside hitter Lyla Traylor, who led the team in kills last year, returns along with another three-year starter and District 17-6A setter MVP, Logan LeRoux. In addition, senior right-side hitter Kingsley Wallace has committed to play volleyball at West Point, senior middle blocker Taylor Odum will play collegiately for New York University, and senior outside hitter Lauren Elie is being recruited by several major universities.

“When you have this heavy of a senior class, you’re especially hopeful that we can move forward with the season even if it gets delayed a bit,” said Platt. “My heart goes out to all the athletes this past spring who didn’t have their seasons because of the cancellations due to the coronavirus. We’re certainly ready for the challenges ahead.” 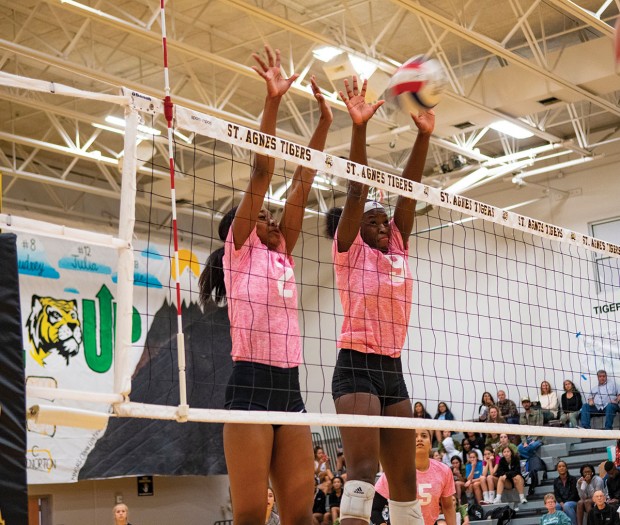 BLOCKED St. Agnes Academy senior Kendall Harris (left) and Toyosi Onabanjo team up for a block in a Tigers’ match from last season. The duo are among several key starters returning from last season’s TAPPS 6A state championship team.

With the return of 11 players from last year’s TAPPS-6A state volleyball championship team, the St. Agnes Academy Tigers had certainly hoped for an on-time start to the 2020 season. Unfortunately, the original Aug. 12 start date is not going to happen; TAPPS announced a revised Sept. 21 start-up to the volleyball season. The new date now shortens the season by approximately six weeks.

“Our motto entering the season is ‘Defend the Den 2020,’” said Tigers head coach Cydryce McMillian. The Tigers, who are coming off their first state volleyball championship in 14 seasons, were originally scheduled to play several UIL powerhouses in non-district but will now adjust to a district and playoff schedule only.

They will be ready to go behind a lineup that features the return of senior middle blocker Toyosi Onabanja and junior outside hitter Sophia Agee, who were both All-State selections last year. In addition, the Tigers feature a trio of outstanding setters in junior Grace Webber, junior Nicole Dworaczyk and incoming freshman Ariel Francis. Plus, four-year varsity player Brooke Middleton, who missed the last part of last season due to injury, returns at full strength for her senior year. 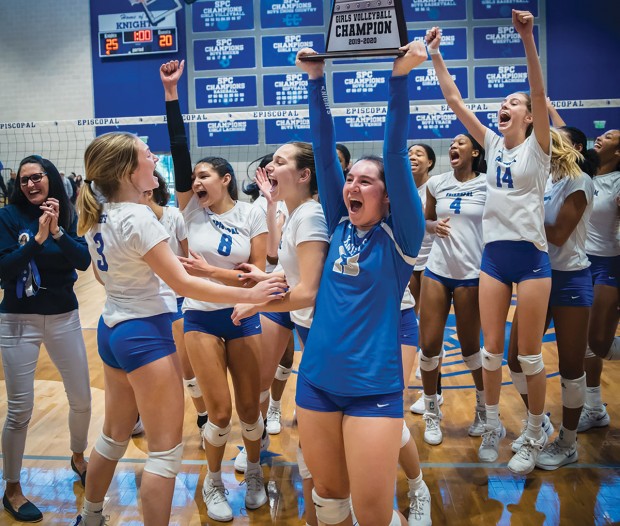 Defending SPC volleyball champion Episcopal will be the favorite to defend its SPC title once the season is up and running. The SPC has delayed the start of its fall sports season to Sept. 8, about four weeks later than the original start date for volleyball. “Most of our girls play club volleyball 12 months a year, so they’re used to keeping their bodies in shape and are definitely ready to go,” said Knights volleyball coach Amanda Watts. “The team is hungry to defend its title and excited to get on the court.”

On the court, the Knights bring back an extremely talented crop of players from a team that posted a lofty 35-4 record last season. Leading the way is Greater Houston Volleyball Coaches Association preseason Private School Player of the Year Bria Woodard, as well as her twin sister Cimone Woodard. The 6-foot, three-inch sisters have both committed to play college volleyball at Texas A&M. Plus, the Knights also return a pair of standout senior setters in Camille Hanna and Hailey Black. Black has committed to play at the next level for Cal State Fullerton.

If all that weren’t enough, returning attacker Sania Petties has committed to Mississippi State while senior Morgan Perkins will play college volleyball for the Oklahoma Sooners. Perkins missed much of last season with an injury, so her return at full strength certainly provides additional firepower to the Knights’ lineup. “We were pretty deep in talent last year,” said Watts. “The girls have matured and gotten even better, not just in technique but also from a mental perspective. It’s exciting to see as a coach.”

12:00 pm to 5:00 pm
Location:
The Galleria, Level One between Nordstrom and Macy's
END_OF_DOCUMENT_TOKEN_TO_BE_REPLACED