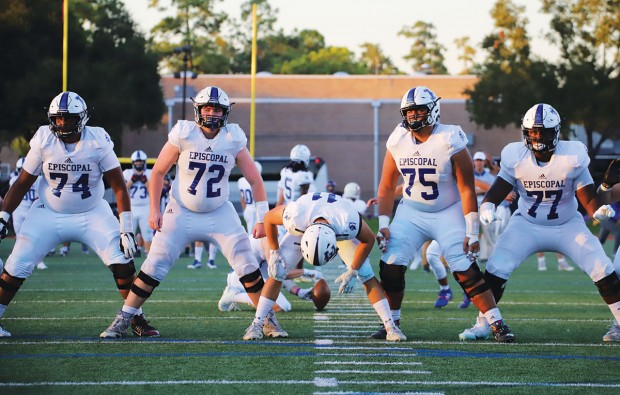 A sense of normalcy returned to football fields at local high schools when summer-conditioning drills were allowed. It marked the first on-campus workouts since the suspension of all school activities in mid-March because of the coronavirus pandemic.

“We literally didn’t have any face-to-face communication with the kids for three months,” said Episcopal football coach Steve Leisz. “You lose that team camaraderie and family environment, which is a big part of what we are in our program. The kids want to be together, as do our coaches.”

“To this point, our guys had been responsible for their own personal workouts, which is pretty difficult. I’d say about 75 percent of them are self-starting motivators, but another 25 percent or so need their coaches and teammates to push them through their workouts. We also lost spring football, so there’s a lot of ground to be made up in a short time.”

While many signs seem to point to an on-time start to the local football season, the Knights’ scheduled early-season opener on Aug. 22 at Westlake High School in Los Angeles has been cancelled. In addition, a scheduled home game against another California school (Warren High School) will not be played. “It’s disappointing to lose those games against the California schools, especially the road trip to Los Angeles, but aside from that, we’re confident that the rest of our games will go off as scheduled,” said Leisz. 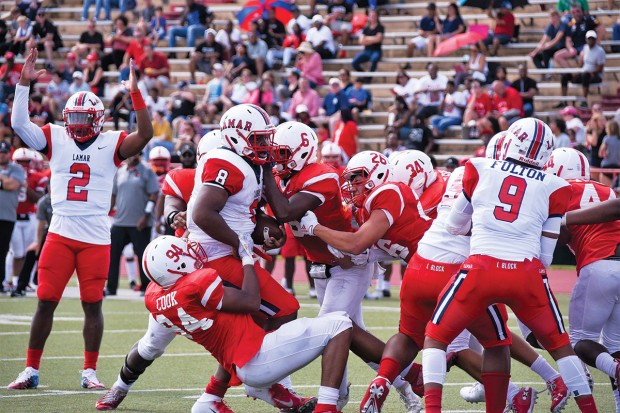 At Lamar High School, head football coach Mike Lindsay also welcomed the return of summer conditioning, albeit under strict guidelines. “We’ve been keeping in touch with our student athletes via Zoom and other online platforms, but there’s nothing like working out in person. Anything we can get done in a group setting at this time has to be considered a blessing. It’s exciting to see them in-person.”

While the UIL (University Interscholastic League) has set forth guidelines for summer conditioning, HISD will adhere to the even stricter measures set forth by the TEA (Texas Education Agency). “The guidelines have our full attention, and it’s important for our kids, coaches, parents and society, for that matter, that we make following those guidelines a top priority,” said Lindsay.

For the summer conditioning program, all workouts will have to be outdoors, including weightlifting, and sanitizing measures will be taken throughout the day on all equipment. In addition to social distancing, there will be coronavirus screening forms filled out before all workouts, along with other rules.

As it stands now, Lamar is scheduled to open the football season on the last Friday in August against George Ranch High School. “We’re hopeful and certainly will be ready and prepared for the upcoming season,” said Lindsay. “We’re also quite aware that nothing is for certain, which is what this past spring taught us.” 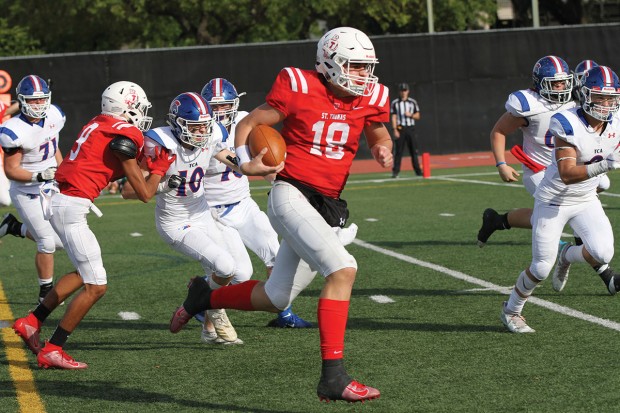 EAGLES ON THE FIELD St. Thomas Eagles standout quarterback Maddox Kopp, seen here in a big playoff victory last season over Trinity Christian, is set to lead the Eagles’ offensive attack again this season. With the start of summer conditioning workouts, signs were pointing to an on-time start to the high school football season.

In TAPPS (Texas Association of Private and Parochial Schools) football, the St. Thomas Eagles were allowed to begin summer conditioning workouts on June 8 of up to 15 hours a week, while following guidelines set forth by both the UIL and TEA. “Like everyone else, we hadn’t even seen our kids in three months, so the first challenge was getting them back on campus and putting in place all the social distancing measures and guidelines,” said Eagles head coach Rich McGuire.

Regarding the actual workouts, he said one of the top priorities would be regaining strength. “We missed three months of lifting, which is critical. We gave the kids virtual workouts, but that’s just not the same. Normally, we would have been in the weight room in March, April and May.”

Another big challenge facing the Eagles is overcoming the loss of spring football. “The thing about spring football is that we get to look at younger kids to see if freshman and sophomore players are ready. For the older players, it’s a tough blow regarding the recruiting aspect. College scouts couldn’t come check out the kids, and they typically do not recruit players they haven’t seen in-person.” On the flipside, the Eagles still boast a trio of heavily recruited players in quarterback Maddox Kopp, receiver Cameron Bonner and Colorado State commit Drake Martinez.

As for the season ahead, McGuire believes the Eagles will be on the gridiron for the scheduled season opener Aug. 28 versus Needville. “It depends on things that are out of our control, but I’m confident we’ll start the season on time.”

12:00 pm to 5:00 pm
Location:
The Galleria, Level One between Nordstrom and Macy's
END_OF_DOCUMENT_TOKEN_TO_BE_REPLACED