From Bellaire to Netflix 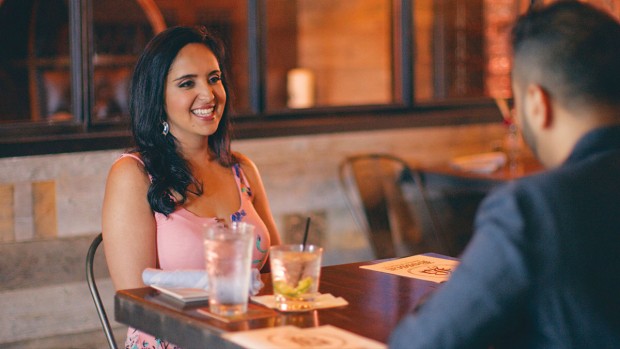 For all of us, 2020 has been an unusual year. For Aparna Shewakramani, the coronavirus pandemic isn’t even the half of it.

In a matter of days, the 35 year old went from being a Houston lawyer living a private life in Bellaire to an international sensation garnering thousands of followers on social media.

How is Aparna handling it all? She’s just enjoying the ride.

“It” all started about two years ago, when Aparna, an avid traveler, was at the airport in Los Angeles waiting to board a flight to Houston. The flight was delayed, she recalls, so she was killing time by scrolling through Facebook. She spotted a post from a friend that read: “Are you single? Are you South Asian? Are you looking for your life partner?” Aparna checked all those boxes and proceeded to click through the post and fill out an application to be cast on a dating show. She submitted the application on the spot.

Aparna had no idea she’d be cast on the show, let alone that it would become an instant hit worldwide. “In my mind, it’s so strange that I did something so rushed on my iPhone and it created this,” she says.

On the show, Aparna is one of several clients of Sima Taparia – a woman in Mumbai who earns a living as a matchmaker, connecting hopeful brides- and grooms-to-be with their future partner. The show delves into arranged marriage, an age-old practice that remains common in parts of South Asia. In traditional arranged marriages, parents – sometimes with the help of a matchmaker – select a spouse for their son or daughter, considering a person’s family background and education along with physical traits like height and attractiveness. Indian Matchmaker shines light on this system and the realities of modern dating – among both Indians in India and around the world.

Aparna, who challenges traditional gender norms and Indian cultural stereotypes with her strong opinions, career focus and blunt remarks, quickly emerges during the first episode as a polarizing character. 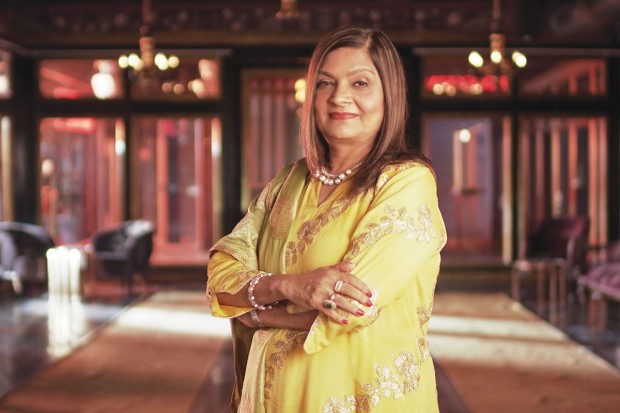 Sima Taparia, a matchmaker based in Mumbai, India, is the glue of Netflix’s series, Indian Matchmaker. (Photo courtesy of Netflix)

To some – including Sima the matchmaker – Aparna is self-centered, picky and negative. To others, she’s the show’s ultimate heroine. Progressive and headstrong, Aparna knows exactly what she wants in her life partner. She isn’t about to compromise on her values or settle for anyone who doesn’t fit into her life.

In Episode 1, Aparna is first shown in her Bellaire home with her two best friends, pouring a glass of wine and grabbing a slice of pizza “kicking off a Fat Pants Friday,” as Aparna calls it. Over the course of the episode, she reveals the multitude of men she’s rejected in the past – the football fan, the “funny man,” the one who didn’t know that Bolivia had salt flats – apparently that’s a deal breaker for Aparna.

Viewers learn that Aparna’s mother, Jotika, who also lives in Bellaire, was only 19 years old when she got engaged. “I was put under a lot of pressure,” Jotika says on the show, explaining that she was unhappy in her marriage and got divorced after 11 years. “I believe every human being, unlike myself, has the right in their life to make decisions, life choices. I was not given that opportunity to make a decision for my life. So I want my child to have every possible choice.”

Aparna has a close relationship with her mom, with whom she bears a striking resemblance, along with her older sister Vansa, who is married. Aparna calls these two women her friends and cheerleaders. Their close ties come through on the show – both Jotika and Vansa seem invested in Aparna’s dating life, openly sharing their opinions about men’s “biodata.” And since the show aired, the trio has been spotted walking in their neighborhood, engrossed in conversation while Aparna’s beloved pup Conan rides in a stroller.

Today, messages are flooding Aparna’s Instagram. People from all around the world – the Netherlands, Russia, India – are sharing their thoughts. Some people are critical of the show, saying it perpetuates toxic views like colorism and casteism. Others appreciate that Netflix took on the topic of arranged marriage. Many find certain scenes entertaining, such as when Sima consults astrologists and face readers to figure out whether two people will have a successful relationship.

Aparna says she is focusing her time and attention on the positive feedback and the interesting questions being asked. She says she does not get bogged down or discouraged when a viewer says something hateful on social media.

“Like I say on the show and what I stand by is: I like me,” Aparna says. “I think it’s very important to say. If you know you’re doing your best, if you know you’re progressing in your own life, if you’re focused on growth and evolving, then you can’t really worry about what other people say. In my particular circumstance, I can’t worry about what people I’ve never met – who are hiding behind a screen saying hateful things – are saying. I’m a lot more focused on the positivity and the great dialogue that’s happening.”

What Aparna considers constructive feedback is quite enough to keep her busy. The Vanderbilt Law School grad is deftly balancing her full-time job at a law firm with non-stop media requests, Instagram Live events and podcast interviews, not to mention the travel business she’s building. She gets three to four hours of sleep and then starts the balancing act again.

In her few free moments, Aparna personally responds to direct messages from strangers.

“I’ve been surprised by how many women have reached out to me,” she says. “Some are very raw and honest and candid, and they explain situations where they’ve been quieted, or where they didn’t feel like they had the right to stand up for themselves…. It’s incredible to me that so many women are watching the show and gaining some strength in their own voices. That was never the intention for me when I went on the show. I was just going on to find a husband through the matchmaking process.” 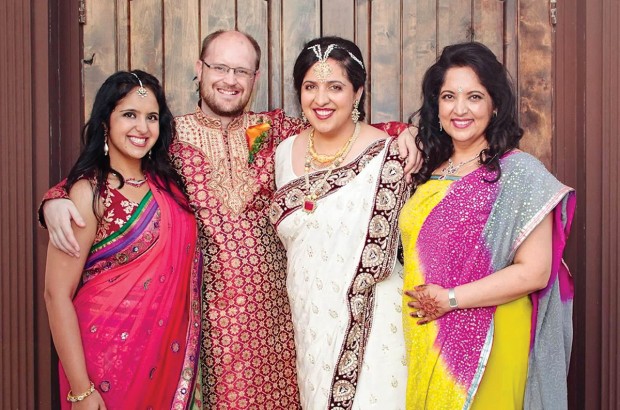 Aparna Shewakramani has always been close with her mom Jotika (right) and older sister Vansa (second from right), pictured as a newlywed with husband Darrin. (Photo: Divya Pande)

*Spoiler alert. Stop reading now if you don’t want to find out what happened on the show.*

As it turns out, the show did not exactly fulfill that husband part. While Aparna signed on for a chance to meet her soulmate, today she’s still single – and it seems that most, if not all, of the show’s other characters are, too.

Over the course of the eight episodes, we see Aparna date four different men. One she rejects after the first date because the man did not have a plan for his life. Other dates seem like they have potential, but chemistry is lacking.

Aparna doesn’t seem at all put off by the fact that a relationship didn’t pan out. In fact, she says she remains close friends with at least two of the men she dated – Dilip and Shekhar – and has found a sense of camaraderie with the show’s entire cast.

She also appreciates that the show puts a spotlight on Houston, a city she loves for its culture and dining scene. Houstonians are curious where Aparna’s dates took place, and Aparna is happy to share – date spots included Goat Yoga Texas in Cypress, Bosscat Kitchen & Libations on Westheimer, Liberty Kitchen at the Treehouse and a Well Done Cooking Class in the Heights.

Aparna reveals on the show that she has a favorite spot for first dates, which she strictly limits to 55 minutes. She times the date such that the prospect has only an hour until the restaurant closes. That way, it’s not another wasted long evening if her date turns out to be a bore. Those dates usually take place at Sonoma Wine Bar, she says.

What’s next for Aparna? The fiery attorney has been considering a move to New York City for some time, though coronavirus has delayed it. She’s also excited to grow her travel business, My Golden Balloon, which curates travel tours for small groups and offers guides on where to stay, eat and tour in different cities. As far as love is concerned, Aparna has not been actively dating since the pandemic, but she’s open to whatever might come her way.

“I have never shot down an opportunity to meet someone new, whether that comes through a friend or a blind date or a matchmaker or an app,” she says. “I’m open to all avenues, and I remain that way. I don’t think there’s any reason for me not to think that the person could come from anywhere, at any time.” 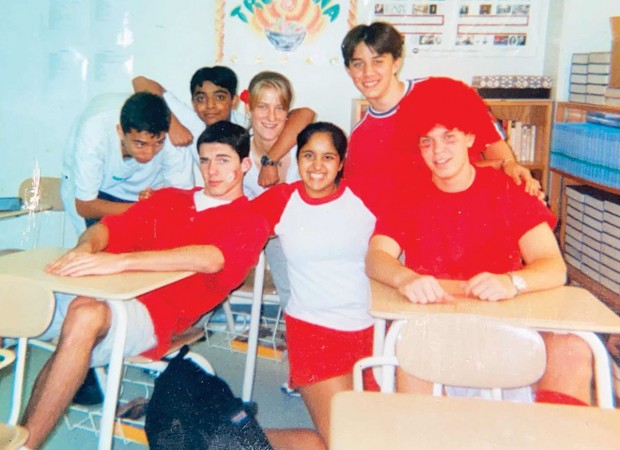 Find your perfect first-date spot. And then stick with it.
“I go to the same wine bar, so I know what I’m going to order and where I’m going to park. I think a lot of it is about carving out that space where you’re comfortable and relaxed and not rushed.”

Don’t be rushed, Aparna says. But also, stick to the 55-minute rule.
“I joke that the dates are only 55 minutes, but that’s a lot of time to give someone just to see if you want to go on another date with them. That’s all the first date really is. It’s saying, ‘Do I want to see this person more?’”

Specifically find a place that closes at 9:30 p.m. and then plan your date for 8:30 p.m.
“You get home [from work], work out, walk your dog, eat your dinner, change into something more comfortable, and then you’re in a better frame of mind to meet the person. It’s not like you don’t get to walk your dog or eat dinner that day. You still get to do those things. Instead of watching TV or reading a book or unwinding for the evening, you’re getting to drink lots of wine with one person. It’s efficient.”

How do you finesse the date such that you’re the one picking the date spot and time? You simply say what you want.
“I just say, ‘How about this wine bar? Does 8:30 work for you? That way we can skip rush hour and both work out.’ It’s like I’m trapping them there. No one has ever said to me they don’t work out.”

Think deeply about what you want in a life partner.
“If you watch the show, you see I never tell Sima I want a particular height or skin color or someone good-looking. I say things that are very pertinent to the way I want to live my day-to-day life. That’s great dating advice I was given when I was younger and something I’d give to people whether they are older or younger than me.”