A different kind of journey 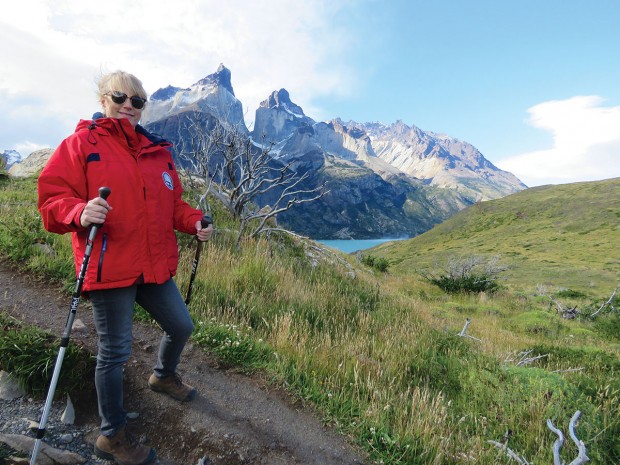 WORLD OF EXTREMES Pam Zane’s travels have opened her eyes to the planet’s vast diversity – from the soaring peaks of the Andes to the exquisite landscapes of the South Pacific. Here, she treks in Torres del Paine National Park, Patagonia.

Travel has always been a mainstay for Pam Zane and husband Randy. Nursery-school sweethearts who married at 19, raised two daughters and traveled the world together, they continued to do so long after Andrea and Stacy had left home, launched productive careers and given them three beautiful grandchildren.

So it was that she was on a trip – this one in South Carolina – when a whole different kind of journey began.

She remembers she had just gotten out of the shower in a nice hotel in Charleston when she began itching all over.

“I thought, maybe it’s the lovely toiletries at this nice hotel we were in,” she recalled with a wry laugh. “But I just continued to be itchy for the whole trip – and I was joking about it when we were with friends. Then I started to have stomach issues – but diarrhea while traveling is not unheard of. I didn’t feel quite right, but never in a million years would I have thought it was something serious.”

After they got home, and she was still itching, she started playing “the Google game” – “which I know you shouldn’t do, my husband is against that – but I was googling things and start seeing things about the bile duct. ‘I think I might have bile duct cancer,’” she told Randy – “but we were laughing, and he said, you don’t have to be concerned, that’s ridiculous.”

Randy, who is a head and neck surgeon, thought maybe it was something with her gall bladder. “We were like, ‘Oh, that will be a piece of cake – the gall bladder is no big deal.’”

But her first test was a sonogram, and there was nothing wrong with her gall bladder.

“My husband said, ‘That’s odd, I’m a little worried about that.’ And my husband’s not a big worrier, so when he worries I get freaked out. ‘Well, no,’ he said, ‘I just thought it would be your gall bladder … I’m just curious as to what could be going on.’” 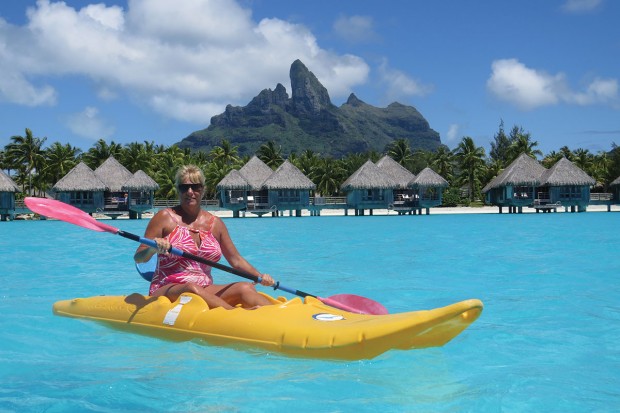 WORLD OF EXTREMES Pam Zane’s travels have opened her eyes to the planet’s vast diversity – from the soaring peaks of the Andes to the exquisite landscapes of the South Pacific. Here, she kayaks in Bora Bora.

The following week she had an endoscopy with general anesthesia. She vaguely remembers a nurse saying, “You have a tumor on your pancreas.”

“I said, ‘What? What are you talking about? That can’t be right – where’s the doctor?’”

The doctor was on the phone with her husband, discussing the findings. The next day, on Labor Day weekend of 2016, she received the definitive diagnosis: pancreatic cancer.

She was devastated. She thought of her brand-new grandson, Knox, born just six weeks before. “I thought: ‘Why does God want to take me away from my grandchildren?’ We just thought it was a death sentence.”

Randy had encountered cases in his residency in medical school, and he knew that it was a very tough cancer to beat.

“We’ve known several people who had it, and they’re not around,” Pam said.

Randy was even more distraught than she was. “Initially it was very hard,” she said. “The first few weeks there was a lot of crying and a lot of depression. My husband was worse than me; my daughters were more worried about him. I think he felt like our world was turned upside down.”

But after meeting with the oncologist, Dr. Robert Wolff of MD Anderson, she began to take heart. “It is a bad cancer, but it’s not impossible to beat it,” she learned.

Pam was fortunate in that her cancer was confined to the head of the pancreas and had not spread, making her among the 20 percent of pancreatic cancer patients eligible for a type of surgery known as the Whipple procedure.

Normally it’s an 8- or 9-hour surgery, but her surgeon, Dr. Wade Rosenberg of Houston Methodist Hospital, did it in 3½ hours. “He came out to my family and they thought it was to just give an update, but he said, ‘No, I’m done.’”

She was in the hospital eight days, and went home on the ninth day – “but the great news was that I had all clean margins and no lymph nodes. So I was so happy. I had really the best news I could have.”

The couple had a long list of travel plans – all of which, they assumed, would have to be canceled. But Pam decided to put the question to her oncologist.

“I said, ‘I don’t want to do anything to disrupt treatment, but I have these trips planned, and is there any way to do them?’ And he said, ‘Yeah, we’re going to work around this, and you’re going to be fine. You’ll skip one treatment here, but you can have it just a week later.’”

She texted Randy right away. 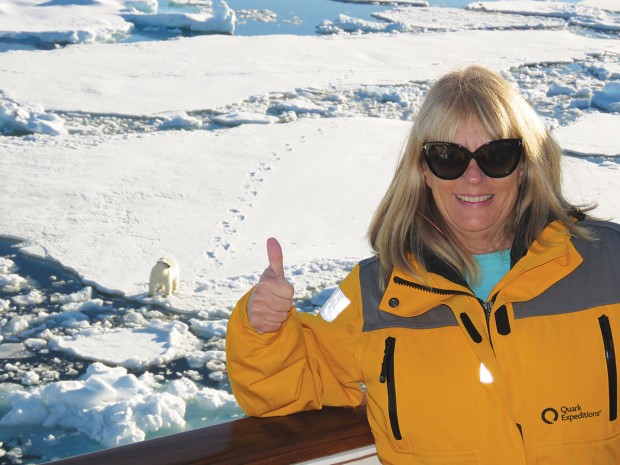 ADVENTURES NORTH AND SOUTH Pam and Randy’s travels have taken them to the polar extremes. Here, she is on the Arctic Svalbard Polar Bear Cruise.

“I said, ‘You’re not going to believe this but I can handle this – I’m going to have chemo every three weeks, and I can go in this trip, and we can go on that trip – he was so overwhelmed. He said, ‘You’re amazing. I can’t believe you’re saying this.’ And I said, yes, I think I can. I kind of surprised myself, but I left there feeling good, feeling like I have a chance. I don’t know what’s going to happen, but I’m going to live while I’m here.

“I won’t say I didn’t cry plenty, but when I was with my daughters and my grandchildren, I enjoyed them. I would just do things that I enjoyed.”

After the diagnosis, the couple’s first trip was a fall foliage cruise from New York to Montreal. It was a little over two weeks, and Pam had her chemo the day before they left and the day after their return.

“I tolerated the chemo and radiation very well, for whatever reason,” she said. “I’m not really the strongest person; I’m not super athletic or in the best shape, but for some reason, it didn’t bother me.”

She’s had her ups and downs, of course – for example, the two times when she got an abscess in her liver and had to be hospitalized for a procedure that ended up being more complicated and painful than the original surgery.

All of which made her hesitant to sign up for the cruise to Antarctica – they’d already been once, and she was worried about what might happen. But a group of friends were going for a more in-depth cruise, and she was intrigued. Finally, she decided to go for it – and was glad she did.

“I really kind of surprised myself because I come from a typical Jewish family of worriers,” she said. “I’m not really a hypochondriac at all, but I surprise myself that I don’t dwell on it that much.” 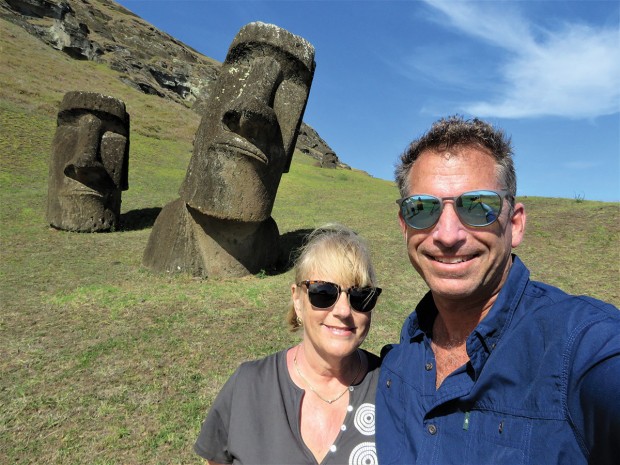 ADVENTURES NORTH AND SOUTH Pam and Randy’s travels have taken them to the polar extremes. She’s been to Antarctica twice, and also to the remote Rapa Nui, or Easter Island, of Chile.

Ethiopia was another one that made her hesitate for a moment – but only for a moment. She’d been to Africa once, going on safari in Tanzania and gorilla watching in Rwanda. She’d always wanted to go to Ethiopia.

“Ethiopia is fascinating — when you see the people in these villages where time stood still for them,” she said. On the downside, there were really no comfortable accommodations, and she worried about hygiene, especially when she noticed that there were no washing machines in the rustic cabin area where they stayed, and realized that the sheets were being washed in a dirty river that ran nearby. She ended up sleeping in her clothes.

“I know that it sounds cliché, but sometimes you don’t realize what you’re capable of – you hear that people rise to the occasion, and I think I did,” she said. “I made up my mind: I want to have that surgery and do whatever I can to get that thing out of me. I sure was not going to give up.”

The pandemic made the couple take a pause from their peripatetic lifestyle. But it was more because of cancellations than from fear of the virus.

She takes it seriously, and they take all the precautions – masks, distancing, and anything else they can do to be considerate and cautious.

“I don’t dismiss that people have died — my husband’s a doctor, and he’s the kind that doesn’t worry unnecessarily, but he takes it seriously too.

“However, I do still want to travel and go places, and I’m not really afraid. I think I have a sort of a bravery in me that I didn’t have before.”

The couple has a trip coming up to Greece, and – if they are allowed inside the European Union country — they will go.

“A part of it is that you don’t know how much time you have. And that’s true for anybody, I know that — but if you have a cancer diagnosis you have more of that feeling, like you really don’t know.

“It makes you really take it to heart that you just don’t know what’s around the corner, and you cannot live in a box.”

Camp For All Homecoming, A Night to Come Together