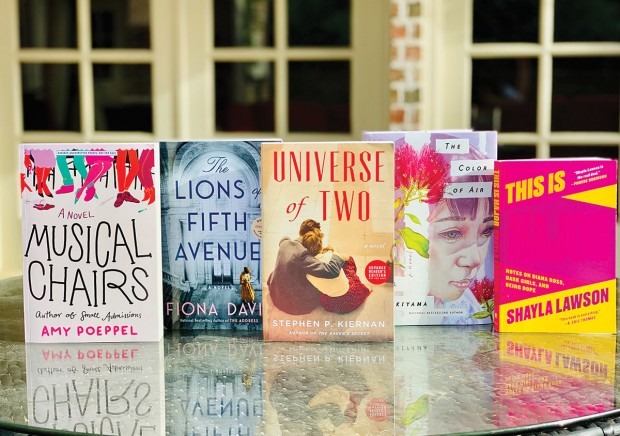 WHAT TO READ This month's picks include three works of historical fiction, a book of essays, and a contemporary tale about family.

The Color of Air by Gail Tsukiyama: Alternating between 1918 and 1935, The Color of Air follows a Japanese-American community living in and around Hilo, Hawaii, and working in the sugar plantations. Daniel Abe left Hawaii years before to work as a doctor in Chicago, but has returned home in 1935 for reasons he doesn't want to disclose to his family. Daniel’s uncle, Uncle Koji, is overjoyed that Daniel has returned but believes the time has come to tell Daniel some long-held family secrets. However, just as Daniel arrives, the formidable volcano, Mauna Loa, reawakens and threatens their lives and unearths family secrets that have been long buried. This is a beautifully told novel that will stay with you for a long time.

The Lions of Fifth Avenue by Fiona Davis: Set in the beautiful and historic New York Public Library, The Lions of Fifth Avenue is a dual-timeline story about two women living 80 years apart who must deal with the theft of valuable books from the library’s collection. While investigating the missing books, each woman makes discoveries that may alter her life forever. Readers will eat up the details about the superintendent’s apartment in the library and other little-known tidbits about this iconic and historic building. I am a huge fan of Fiona Davis and her books, which are set at various New York City icons. I believe that this is her best novel yet.

Musical Chairs by Amy Poeppel: Bridget and Will’s decades-long relationship seems perfect – except it is platonic, to the amusement and confusion of their friends. The chamber group they formed as students, the Forsyth Trio, is now struggling and without a violinist. Bridget was hoping for a perfect summer with boyfriend Sterling, but her plans are dashed when he breaks up with her and her twins (in their 20s) show up unexpectedly, bringing their own drama with them. To top it off, her father announces he is getting married.  Hoping to kill two birds with one stone, Bridget comes up with a plan to host the wedding that will hopefully also bring attention back to the Forsyth Trio. However, for that to work, she and Will need to recruit Gavin, their old violinist, to come back to the trio. This novel has Poeppel’s signature wit and insight into family dynamics.

This Is Major: Notes on Diana Ross, Dark Girls, and Being Dope by Shayla Lawson: Poet Shayla Lawson’s new essay collection highlights black women and girls and their contributions to pop culture, including music, style and language. Weaving in politics, racism, history, mainstream culture and personal stories, she addresses her sense of self in the current world. Lawson lays bare what she thinks it means to live as a black woman. My favorite essays include “No, My First Name Ain’t Whoopi” and “I Tried to Be Twitter Famous.” Lawson’s pitch-perfect humor, balanced with sharp commentary, makes this the perfect summer 2020 read.

Universe of Two by Stephen Kiernan: Universe of Two is the fictionalized story of Charlie Fisk, a real-life mathematician who designed and constructed the detonator for the atomic bomb. Recruited to work on the top-secret Manhattan Project, Fisk was ordered to create the detonator against his own beliefs, and when he had a crisis of conscience, his wife, not privy to the details of the project, encouraged him to finish his work on the project. Following the detonation of the bombs, he and his wife spend their post-war years attempting to make amends for his contribution to the devastation wreaked on Japan. Kiernan brings Fisk to life in a heartfelt tribute.

12:00 pm to 5:00 pm
Location:
The Galleria, Level One between Nordstrom and Macy's
END_OF_DOCUMENT_TOKEN_TO_BE_REPLACED