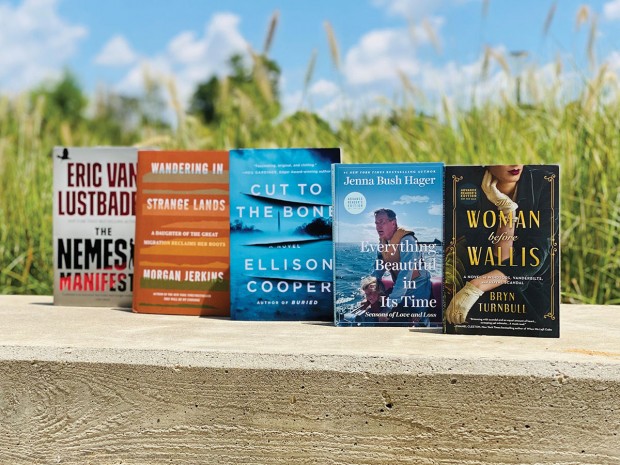 WHAT TO READ This month’s picks include two nonfiction books, a heart-pounding thriller, historical fiction, and a fascinating and intelligent mystery.

Cut to the Bone by Ellison Cooper – This intelligent mystery features the highly likeable FBI neuroscientist Sayer Altair. A bus filled with 24 D.C.-area high school students disappears an hour after it sets out for a tournament in Atlanta, and Agent Altair is called in to locate the missing students. She is drawn into the absorbing case filled with red herrings, where nothing is as it appears. In addition to the solid and clever mystery with a highly satisfying resolution, Cut to the Bone contains architectural facts and details about Washington D.C., including the incorporation of Egyptian symbolism throughout the U.S. capital and details about historical locales. Another plus is a fabulous cast of supporting characters and a solid balance between the mystery and Altair’s personal life.

Everything Beautiful in Its Time: Seasons of Love and Loss by Jenna Bush Hager – Hager’s heartwarming and emotional collection of essays honors her beloved grandparents, President George and First Lady Barbara Bush and her mother’s mother, Jenna Welch, who died within 13 months of each other. To find comfort, she shared their words and wisdom with family and friends, and they urged her to memorialize these anecdotes in a book. Hager uses various formats, including letters to her grandparents, sharing stories that she wishes she could tell them personally; my favorite was the letter Jenna wrote on her 37th birthday to Barbara Bush where she recounts the stark absence of Barbara at the family’s summer home in Maine.  Before you start reading, grab tissues – Hager’s tales are charming and touching and will have you contemplating what matters most in your world.

The Nemesis Manifesto by Eric Van Lustbader – The Nemesis Manifesto is a timely, terrifyingly relevant, unrelenting political thriller that starts with a bang and never lets up until the very last page. Evan Ryder works as an agent for a black-ops division of the U.S. Department of Defense. Assigned to investigate the mysterious deaths of fellow agents, she travels across the world to get to the source of the trouble. The author uses ripped-from-the-headlines plot threads, including Russian hackers flooding U.S. social media with invented conspiracies, Nazis trying to stage a comeback, and foreign groups taking advantage of divisiveness. I felt like I was reading the literary version of a Mission Impossible movie.

Wandering in Strange Lands: A Daughter of the Great Migration Reclaims Her Roots by Morgan Jerkins – During the Great Migration, over 6 million black people left their rural Southern homes seeking better economic prospects in the North, West and Midwest. Taking a personal approach to the effects of the Great Migration, Jerkins recreates the paths her ancestors took out of Georgia and South Carolina and studies the loss of familial knowledge and the impact on personal identity. Her premise provides a fresh and enthralling deep dive into one woman’s attempt to understand her roots and her family’s legacy. There is a Houston connection – Jerkins’ paternal grandfather was born and raised in Frenchtown, a subcommunity within the Fifth Ward, created when 500 Louisiana Creoles moved to Houston in 1922 seeking a better life. Thought-provoking and incisive, Wandering in Strange Lands is a timely read. I listened to the audiobook, which Jerkins narrates.

The Woman Before Wallis: A Novel of Windsors, Vanderbilts, and Royal Scandal by Bryn Turnbull – In her debut novel, Turnbull tells the story of Thelma Morgan, the American woman who was involved with Prince Edward before he took up with Wallis Simpson and made history by abdicating his throne for her. While the portions of the book detailing Thelma’s relationship with the Prince of Wales are captivating, my favorite parts are those that include Thelma’s twin sister, Gloria Morgan, spouse of Reggie Vanderbilt, son of Cornelius Vanderbilt II and Alice Vanderbilt. Gloria and Reggie were married for only two years before he died from cirrhosis of the liver; they had one child, the renowned fashion designer and socialite Gloria Vanderbilt. After Reggie’s death, Gloria Morgan Vanderbilt was eventually sued for custody of her daughter Gloria by her sister-in-law, Gertrude Vanderbilt Whitney (founder of the Whitney Museum of American Art). This sweeping historical-fiction tale provides a fascinating glimpse into an earlier era.