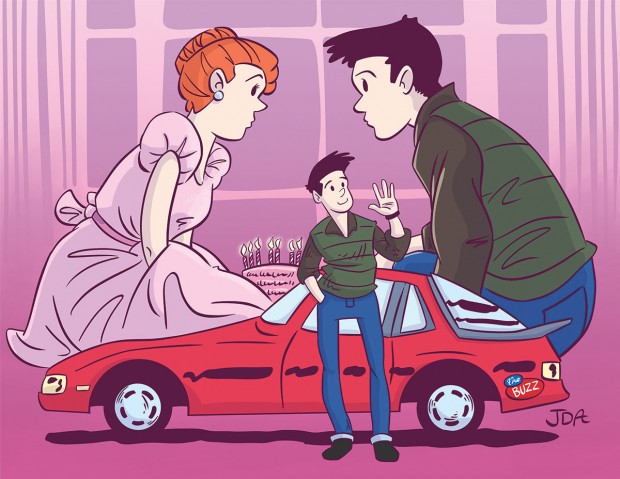 NOT NORMAL In a year when the actor who played '80s heartthrob Jake Ryan turned 60, the Best Picture was a movie called Parasite, and many of us didn't leave the house for months at a time, we just have to try to roll with the punches. (Illustration: behance.net/runamokstudios)

Remember Jake Ryan, the dreamy heartthrob from the ’80s movie Sixteen Candles? He was the boyfriend every teenage girl wished for. Even today, they swoon at his mention, 30 years later.

Well, Jake Ryan turns 60 this year. And it won’t be one of those “he looks the same as he did 30 years ago” birthdays. No, lots of us in our 40s and 50s suffered quite the shock upon seeing Jake’s recent photos (actually those of Michael Schoeffling, who played Jake Ryan), which circulated cross-country at warp speed via text and Instagram.

Jake Ryan’s massive descent from stud to old-school kind of sums up 2020. This year stepped in with a bang: A new decade! A palindrome year! And then.

And then Jake Ryan got old.

It’s not just poor Jake. We’re all feeling pretty old by now, a full six months into this pandemic, roughly 24 weeks of cancelled graduations and rescheduled weddings and rearranged life-as-we-knew-it.

I can’t speak for everyone else, but when we went into lockdown – on Friday the Thirteenth of March, no less – I was giving it two weeks. I was totally baffled by the question of how to stock a pantry that would last without a weekly or bi-weekly trip to the store. (Proof: the stories “Back Porch Table: The prepare-your-pantry-but-don’t-panic-edition” and “Back Porch Table: The let’s-get-real-about-the-pantry-edition.”) Looking back, I realize the pantry-stocking conundrum was akin to the feeling new parents have when their baby starts solid food. It’s daunting for about a week, and then you realize there are going to be a whole lot of exponentially trickier issues.

Starting in March, the month that felt like 476 days, we entered a world where no one knows whether it’s Tuesday or Saturday. And, really, at the start of this new reality, did it even matter? Officing at our dining room tables didn’t require a tightly kept calendar. Nor did it require a wardrobe that included buttons or zippers.

And the lack of buttons and zippers, along with so much extra time spent not in our cars and not in the gyms, which had closed, led us straight to: “I’m baking everything I’ve wanted to bake for the past 10 years but haven’t had the time!” We couldn’t give any of those yummy treats away because nobody wanted to touch anything we’d gotten close to (remember, social distancing). Hence, buttons and zippers will be just a memory, at least for the foreseeable future.

Thank goodness Zoom only has room for head-and-shoulders images. Like a mullet (business in the front, party in the back), we can now throw a jacket or semi-presentable top over our PJs, and no one is the wiser. Meetings and happy hours got a whole lot more comfortable.

And then…Netflix and Tiger King and Joe Exotic. There is no way a series about an alternate universe of people obsessed with big cats could have become viral, except in an alternate universe where the world was so bored at home that this kind of a show could engage millions of us. Maybe we should have guessed that hard times were ahead when, in January, the Academy Award for Best Picture went to a film called Parasite.

Even in the first, relatively quiet two months of 2020, we had lived through a presidential impeachment and acquittal. There was Prince Harry exiting London, Kobe Bryant’s tragic helicopter ride, Harvey Weinstein going to jail, and those poor koalas in the Australian brush fires. Still, we were oblivious to the changes coming our way.

Once we settled in to our New Normal, which is now just Normal, we started enjoying neighborhood walks with friends, socially distanced happy hours on front lawns, family game nights. Even if our kids tried (unsuccessfully) to buck our insistence that they stay at home, I have to think that we shared some quality laugh-till-you-hurt moments watching the thousands of TikTok videos getting posted daily by celebrities, bored teenagers and whole families trying to entertain themselves. That is, until we were told to erase the app ASAP because TikTok is actually spying on all of us.

And what about the killer hornets?

The weight of the events of 2020 cannot be overstated, especially the killings of Ahmaud Arbery, Breonna Taylor and George Floyd. And the coronavirus and deaths and the economy and more. We are living in serious, hard times.

But we’ve got to find a way to live in them, and, at least for me, a big part of that is being able to shake my head and laugh when I can.

None of this must be real.