A journey to a home 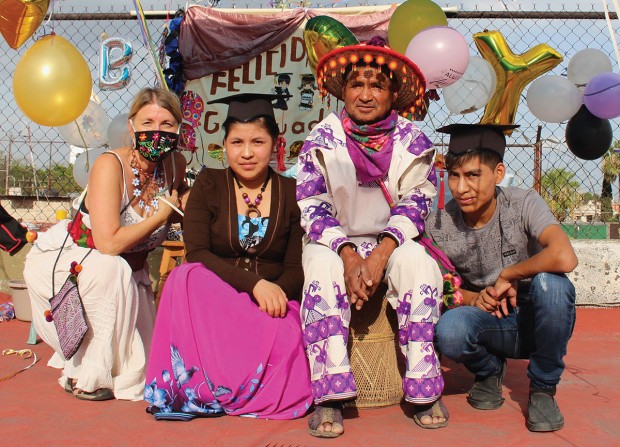 A MAGICAL SURPRISE As we were preparing for our big graduation party of three, a surprise message came in from grandfather José Ramirez, a mara'akame (shaman) of the Wixárika tradition, who was passing through and asked to join us for our rooftop celebration. From left: author Tracy Barnett, Yamina Ramírez, José Ramírez and Bernardo Ramírez.

It’s madrugada in Guadalajara, that liminal space before dawn, and the church bells across the plaza announce the hour. There’s a rare and perfect stillness that I treasure, before the tumult begins.

My heart grows tender as I think of the two young people asleep in the next room. The path that brought them here was an unusual one, and for that, I must thank Covid, and, in a very roundabout way, The Buzz Magazines.

I was a freshly self-employed travel writer, newly liberated by the newspaper purge of 2008-09, following a longtime dream of taking a year-long exploration of the American hemisphere. My plan was to freelance my way from Mexico to Argentina and back again, writing about my adventures and the people along the way. Emboldened by one solid gig – a monthly Travel Buzz column – I thought I could make it work.

Eleven years later, I am still making it work. The Buzz has granted me the privilege of being their sole international correspondent, and this column has provided a base for the freelance career I had dreamed of, after raising a daughter and leaving a 25-year career in the newspaper business, most recently as travel editor of the Houston Chronicle. I’d had the chance to teach journalism at a major university, help launch a pair of startup newspapers, and travel the world.

But back to the kids in the next room…. It began in the waning weeks of 2010, at a transformational gathering called The Vision Council in the mountains above Mexico City. There I met a man who wore a squirrel tail sprouting from a beaded hat – a maraka’ame, or shaman, of the Wixárika or Huichol tradition. Little did I imagine that my life would become so intimately entwined with his and that of his family.

I was closing the chapter on my epic journey, an exploration of the continent’s social movements for a blog I called The Esperanza Project – Esperanza being the Spanish word for hope. And I was making the decision to stay in this amazing country and work for a while alongside the Huichol people, reporting and supporting their fight to save their most sacred site, Wirikuta, from a transnational mining corporation.

Now, a decade later, two of Don José’s beautiful grandchildren have been sheltering in place with me during the coronavirus, completing their high school studies with the solid internet that their remote mountain community lacks. The pandemic had closed the boarding school where my self-appointed goddaughter Yamina – Don José’s granddaughter – had been studying. It had also grounded this peripatetic roving scribe in my two-room apartment in the historic heart of Guadalajara, Mexico’s Houston-sized second city.

So it was that on the morning of March 12, I discovered a message on my WhatsApp – “Voy en camino, Madrina” — I’m on my way, Godmother. And two hours later Yamina was on my doorstep, together with her cousin, Bernardo. I opened my door to them for what I thought would be a couple of weeks. Three and a half months later, venturing out with our face masks and an abundance of caution, we celebrated their graduation.

To be honest, these three months have had their moments. Housing two teens in a small apartment that also serves as my office – in a pandemic, on a freelance writer’s budget – has been trying at times. I worried that my column would disappear with the economic downturn – who wants to read about travel, when boarding an airplane poses an existential threat? But my editors stood by me, and I continued to write.

I launched a Patreon campaign to support The Esperanza Project, which has come pretty close to covering the kids’ expenses. And this morning, as I contemplate the pile of scraps and art supplies at my feet – and the display they’ve created with the sparkly words “Felicidades graduados” – I feel a wave of gratitude. To The Buzz, for standing by me during these precarious times. To my readers, who have opened their hearts and their wallets. And to these beautiful children, who have gifted me with a lifetime of memories – and who have taught me, from the heart of a global pandemic, what it means to be a “madrina,” a godmother.

Meanwhile, Wirikuta was saved, at least temporarily, with a judicial stay. During those years I put down roots here in Western Mexico, and my travel, as well as my writing, has taken a different turn. Seeing the impacts of extractive industries on communities has changed me. My travel these days is connected with the environmental stories I write, through visits with the people I love – and vicarious, through the continuing adventures of Buzz readers.

10:00 am to 4:00 pm
Location:
The Heritage Society
END_OF_DOCUMENT_TOKEN_TO_BE_REPLACED