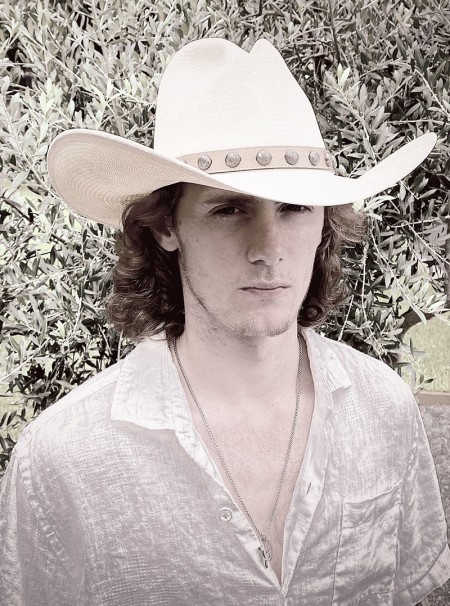 August Galliano, 18, is an avid guitarist who plays in styles ranging from jazz to scream metal.

This week’s Name That Tune is brought to you by August Galliano, a guitar aficionado who recently graduated from Lamar High School. During quarantine, August has been focusing his time on music – writing songs, playing the guitar and seeking out new bandmates. Read on to learn more about this talented musician.

How did you get into guitar?
The guitar was kind of always a part of my life. I got my first guitar when I was about 8. I was shopping with my grandmother, and I saw a toy guitar in a Walmart and I had to have it. I tried to pick around on that, but nothing was really happening. Then, when I was about 12 or 13, I got an electric guitar for Christmas. That’s when I started to do more with it. I started trying to watch YouTube videos and learn from that. Once I got into eighth grade, I actually started learning chords and everything. I mastered all the basics in 8th grade … About three years ago I started taking it seriously and started putting stuff on my Snapchat stories. I made an Instagram and put random videos on there of me playing or new stuff I come up with.

Let’s back up – you said that by eighth grade you had mastered the basics. Did you pick that up on your own from YouTube or did you take lessons?
I would look up little lessons on YouTube and also one of my neighbor’s friends who lived in Switzerland was amazing at playing guitar. He was in Houston for about a year, and he taught me for a couple of months too. But I’m pretty much self-taught.

What kind of stuff do you play?
Usually when I’m just jamming out in my room, I’m playing more chill stuff. I have a wide variety of music. I listen to every single type of music, from jazz to scream metal. Most of the stuff on my Instagram is chill stuff, but when I’m playing in my bands and jamming on stage, I go really hard and give it everything I’ve got.

Tell me about the bands you’re in.
I started my first band a year and a half ago. That was with one of Zak Pham’s friends and then a girl I met at Lamar who played bass. We played a show and it went really well. But the drummer was a jazz drummer and the bass player was a funk bass player and I was playing blues, so it wasn’t mixing together very well. I found this other band called Orion and they have an amazing rhythm section. I played with them for a while.

If people want to find your music, is Instagram the best place to look, or have you released music on other platforms?
I’m in the process of putting out an album and putting together my first acoustic album. I haven’t had any experience producing and recording so I’m still trying to learn how to do that. So Instagram is the best for right now. [Follow August on Instagram at @augustsstuf]

When did you start writing and singing?
I guess you could say it’s newer for me. I’ve been singing for four or five months. Our guitar player was in a band before. I showed up to one of their practices, and I was just messing around. I have never sung before, and I got up and just screamed into the mic and they loved it and said “that’s our singer right there.”

Do you want to pursue music as a career or do you see it more as a side hobby?
At this point, I’m pretty much all in. I get a lot of positive feedback and a lot of people telling me to keep going with it. I’m going to go as long as I can. I have a band coming up in college station. I put out a bio for Texas A&M Class of 2024 saying I was looking for people to perform because I really want to perform at parties and events. I have a lot of people lined up. I have to put together an audition and pick out the people I need. I think that’s going to go really well too because there’s a handful of artists who have come out of College Station.

Do you have any artists who you’re inspired by or musicians who you really like?
My main inspiration is probably Led Zeppelin, Black Sabbath, Pink Floyd and Jimi Hendrix.

The Market at Sawyer Yards

6:00 pm to 10:00 pm
Location:
The Market at Sawyer Yards
END_OF_DOCUMENT_TOKEN_TO_BE_REPLACED