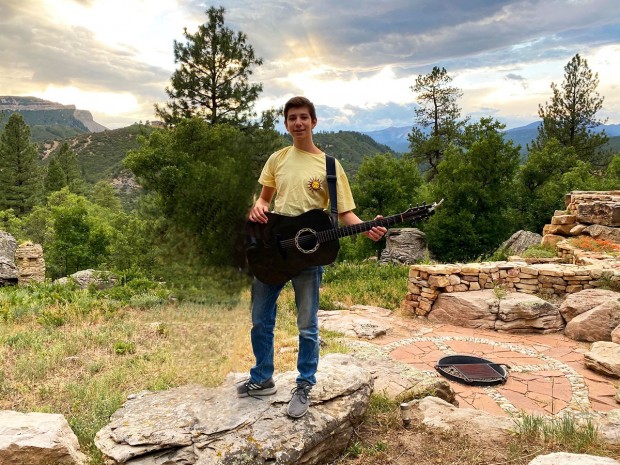 Jordan Sheldon, 17, always brings his guitar with him during family vacations and trips. Here, he’s pictured with his guitar during a recent trip to Colorado.

This week’s Name That Tune is brought to you by Jordan Sheldon, a multi-talented rising senior at Kinder HSPVA. Although Jordan is in HSPVA’s theater department, he dabbles in all kinds of art – singing and writing music, playing the guitar and piano in addition to painting, drawing and creating set design. Read on for excerpts from our conversation, where Jordan talks about everything from screen addiction to socially- distanced theater. See The Buzz Facebook for a video clip from Jordan.

Can you start by telling me a little bit about your background in music?
My dad plays guitar, so I’ve kind of grown up with it. There are literally pictures of me as a baby with a giant guitar on top of me. I took guitar lessons when I was little. More recently, I’ve found the holistic uses of it – it’s kind of therapeutic for me. At times, high school can be very stressful, so using [music] as a tool to relieve myself of stress. And during the quarantine, using it as a creative outlet. I’ve done some song writing and have learned a bunch of new songs.

What made you decide to go to Kinder HSPVA and focus on the arts?
In middle school [at Pin Oak], I kind of discovered I was super artistic. I didn’t see myself going to a high school where I would go and do my schoolwork and come home. HSPVA stuck out to me as having a lot of fun creative programs that I could get involved in. I didn’t know if I fully wanted to do theater yet, but I’m glad I made that decision because I really love acting and I really love performing.

What does it mean to be focusing on theater at HSPVA?
I’m in the theater department, but I take a lot of acting classes. I’m kind of one of their students who doesn’t like to pick one straightforward path. I’m interested in so many different areas of art. I do a lot of visual arts. I have an art collection I’ve been creating over the quarantine. And I do a lot of theatrical design like scenic design, which requires a lot of visual arts techniques and principles.

Do you have a sense of, down the line, if you’d want to focus on one area? Or would you continue to dabble in these different areas of art?
I’m mostly applying to colleges for film – screenwriting and producing. I really am enthralled with film and the film industry, so I hope to pursue that. But I want to hang on to acting.

Can you tell me a bit more about what you’ve been up to in quarantine? You mentioned working on art projects.
Life does move slowly in quarantine. I’ll get up in the morning. I’m not going to lie – everyone always tries to look like they are so gleamingly productive on social media. I guarantee you that that is the case for no one. They probably get out of bed like I do and are on their phone for 30 minutes realistically. Then, maybe I’ll go to the piano, maybe I’ll go work on some of my paintings or go work on my standup. I am applying to colleges so that does take up a lot of my time.

You previously wrote an article in The Buzz Magazines where you talked a bit about screen addiction and how you use the arts as an escape. Can you talk more about your relationship to technology and how the arts play into that?
For me, who is someone who is very visually stimulated, I don’t think it’s healthy to have constant access to [my phone]. I think a lot of artists have trouble staying off of their phones because it’s this device that has all these colors flying at your brain. It’s a literal representation of an addiction. With quarantine, we feel like we are at a loss for opportunities, especially in the arts and especially in theater. A lot of people who do theater feel like they don’t really have a purpose anymore. You can’t have a bunch of people in a room watching a performance right now. As far as cell phones go, I hope that sometime in the future there will be a transition from touch screens to flip phones. I think if everyone is getting off of touch screens and colorful display technology then it will be more socially acceptable. I have mixed feelings because [my phone] has helped me connect with people, but it also has made me feel kind of gross and like a zombie.

Tell me about what theater is going to look like for you in the next few months.
There are two directions it can go: it can either be virtual or socially distanced. I think socially-distanced theater would be an interesting concept to play around with. People would have to make a connection with each other on the stage without physically connecting. Depicting love between two people without a kiss, or depicting hate between two people without a fist fight. It’s a challenge but theater people are always up for challenges so I have no doubt that some interesting theatrical content will prevail throughout the next months.

Editor’s note: For more of Jordan’s art, follow him on Instagram @jordancreatesthings. If you love music and want to submit a Name That Tune, email [email protected].