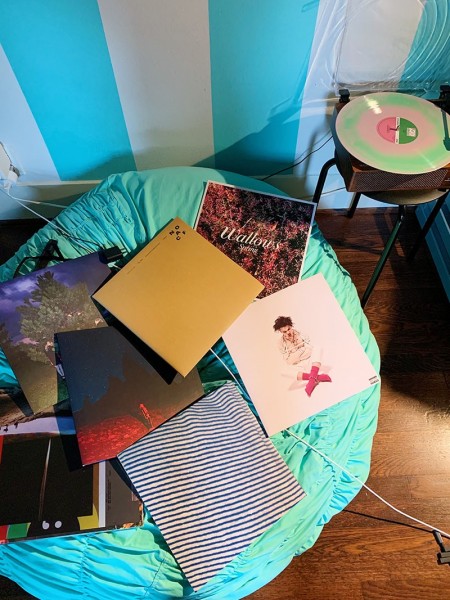 Records that Pesikoff currently owns sprawled out on her beanbag.

While this summer in quarantine spurred a severe addiction to Netflix for some (no remedy found), others were inspired to explore creative hobbies and at-home activities to keep themselves preoccupied.

“I had no idea what embroidery was; I just knew that it was going to be a fun thing for me to do on my own,” she said.

Pesikoff explained that listening to music while embroidering is the perfect combination for relaxation.

On the Womxn Helping Empower Each Other (WHEE) sweatshirt, a club at SJS, she used her vibrant threads to create intricate designs, like a radiant rainbow and miniature cactus.

Aside from the new hands-on art, Pesikoff has also taken up collecting records. Her first? Punisher by Phoebe Bridgers, which she purchased at Cactus Records.

“After visiting Cactus Records near my house, I made it my personal mission to visit almost every record store in Houston and check each one out,” she said. “It’s one of my favorite things to do alone because you can just go there for hours and browse through all these different records; it’s actually very relaxing.” 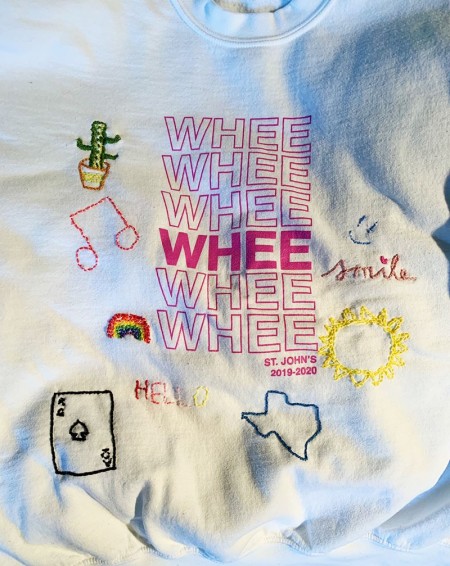 Pesikoff has since picked up Notes On A Conditional Form by the 1975 from Cactus, 21st Century Liability by YungBlud from Soundwaves, and I, I by Bon Iver from Vinyl Edge Records.

Her interest in records began shortly after her older brother received a record player as a gift from their grandfather. While her brother’s music taste is strictly classical, Pesikoff describes her taste as ranging from hyperpop to indie rock.

This Saturday, she will attend her first National Record Store Day event. At several record stores across Houston, artists will either drop limited edition records or go on a small run and give their album to independent record stores to sell.

She is looking forward to listening to Nothing Happens and Spring by Wallows, 1000 Gecs by 100 Gecs, and Stranger In The Alps by Phoebe Bridgers as soon as she receives the albums in the mail.

Pesikoff had a productive summer, but she will stay busy for as long as the quarantine persists with her fresh, exciting pastimes.

She Has Hope 4th Annual "Taste of Hope" Gala