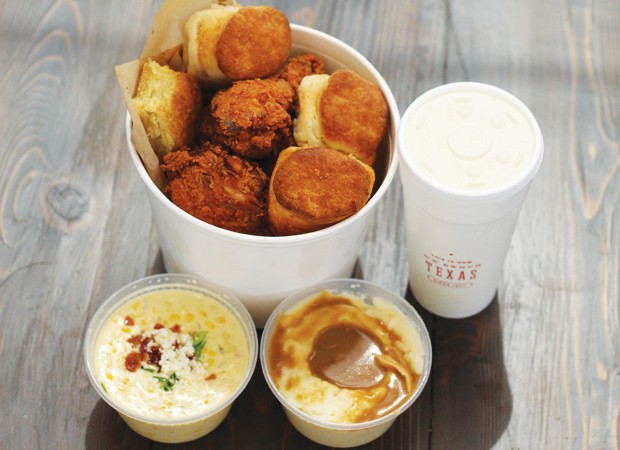 The restaurant industry has faced highs and lows, but you always can count on it to bounce back from a flood or hurricane. Restaurateurs can project when their new eateries will open even amid such calamities. This isn’t the case now.

Despite uncertainty around the pandemic, some are moving forward with new concepts, but expect coronavirus to reshape the dining business for years to come.

A growing number of restaurateurs are creating virtual brands available for delivery only. For example, there’s Levi Goode’s to-go-only Goode Bird, which operates out of Goode Company’s Armadillo Palace (5015 Kirby).

Orders can be placed over the phone for daily pickup, or get the buttermilk fried chicken and the spitfire-roasted version delivered, along with to-go cocktails, such as the Double Birdie, a single-barrel bourbon concoction with fresh-brewed tea and lemonade.

“We’ve sold out of chicken every day,” says Goode, who is donating 1 percent of Goode Bird earnings to Houston charities. “As crazy as it’s been, it has been slightly refreshing to take a fresh look at everything. We ask ourselves, ‘What does the future demand?’”

For others, it’s a way to maximize their kitchens and hire back employees, even though social-distancing restrictions have shackled dining rooms. Some chefs even view this as an opportunity to expand their culinary reach and bolster dwindling dine-in revenue.

When restaurants were capped at 50 percent capacity, chef Alex Au-Yeung decided to expand his takeout business to inside the Loop.

After the rollout of popular Phat items such as curry laksa, roti canai and beef rendang, Au-Yeung intends to introduce two more Asian virtual concepts – YELO and Pig+Duck – which will feature a modern twist on Chinese roasted duck and barbecue, such as char siu.

YELO was intended to be a brick-and-mortar Vietnamese banh mi and coffee shop, but with construction delays from the pandemic, Au-Yeung and executive chef Cuc Lam plan to operate YELO as a virtual concept until they can open the physical location next to Phat Eatery in the bustling Katy Asian Town, at I-10 and the Grand Parkway.

“Instead of building a brick-and-mortar, we can get started much quicker this way and reach a much broader audience,” Au-Yeung says.

Before the pandemic, a bevy of new restaurants were set to open this fall in anticipation of the holiday rush. Now, investors are taking a wait-and-see approach, keeping their fingers crossed for those restaurateurs and chefs who are struggling to stay afloat while lobbying for financial help. Still, with the ball already rolling, a few have moved forward.

Although Clark Cooper Concepts plans to open its health-driven Satisfy (2229 San Felipe) this fall, everything else, including the concept replacing Punk’s Simple Southern Food, is on hold. Meanwhile, Punk’s is home to Daddy’s Burgers, a pop-up that Grant Cooper and his partner, chef Charles Clark, have been testing during the pandemic with success. Plans are to find a permanent home to serve their grass-fed burgers and tater tots.

“It’s hard to plan because we don’t know when it’s going to settle down. It may be the middle of the road, but I’d rather go 100 percent,” Cooper says.

One of the most anticipated concepts this year is Raz Halili’s Pier 6 Seafood & Oyster House (113 6th Street in San Leon), between Red Fish Island and Prestige Point. The much-anticipated waterfront restaurant, with former Brennan’s executive chef Joe Cervantez penning the modern seafood menu, was set to open in July. Now Halili is shooting for a fall opening.

“Right now, you just have to go with the flow because everything can change tomorrow,” says the second-generation oyster man, whose family operates Prestige Oysters Inc., one of the largest providers of fresh bivalves in the country. The processing house is about six blocks down the road, and diners can expect waterfront views of working oyster and shrimp boats while forking into wood-grilled oysters and fresh catches, along with Cervantez’s fresh, modern twist on seafood fare.

For now, Cervantez is focusing on to-go lunchboxes in lieu of dine-in restrictions, but he anticipates a time when limits are lifted and guests can choose their preferred wood and compound butter, then sit back and watch their shellfish roasting.

In a cocktail shaker or mason jar, add ice, bourbon, lemonade and tea and shake well. Garnish with a mint sprig and lemon wheel. Serves 1.