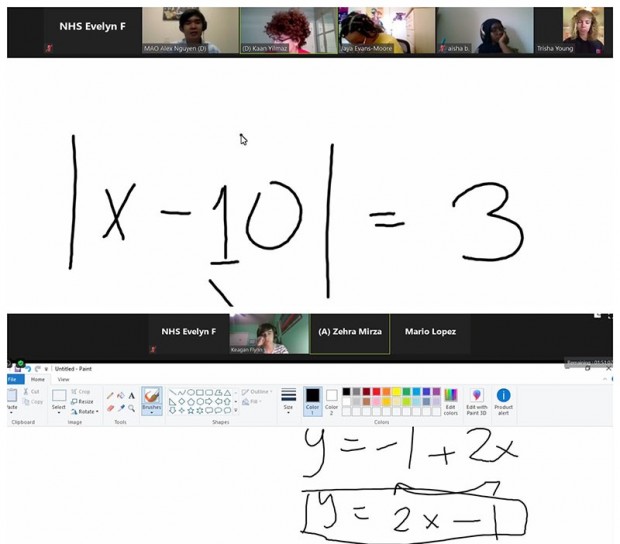 The annual freshman math camp, a long-standing tradition at Carnegie, was held over Zoom this year.

The week before school starts is usually busy and full of chaos. Although Houston ISD’s decision to begin the 2020-2021 school year virtually meant that less back-to-school shopping was needed, many students entering Carnegie Vanguard High School still had an event planned in their schedules: the annual math camp.

The freshman math camp has been a long0running tradition at Carnegie. Not only is it an opportunity for incoming ninth graders to brush up on their math skills, but because it is usually hosted within the campus, they also get an opportunity to explore and learn inside the school itself. Unfortunately, given the current circumstances, the National Honor Society and Mu Alpha Theta (Math Honor Society) cabinet members who planned the camp had to get a little more creative this year.

Ultimately, it was decided that the camp would be run through Zoom, the online digital meeting platform that students and adults alike have gotten more familiar with throughout the quarantine.

Even though it would not be held in-person, over 40 rising sophomore, junior, and senior Carnegie students within National Honor Society and Mu Alpha Theta still signed up to tutor. The freshmen were even more responsive, with over 130 students registering to be tutored in Algebra 1, Geometry, or Algebra 2, depending on the math level they were entering.

Through rigorous planning, the event was a success. It spanned five days, Monday, Aug. 31-Friday, Sept. 4, with pairs of tutors assigned to groups of approximately 4-6 freshmen in breakout rooms. Because the camp was also a way for freshmen to acquaint themselves with others, each three-hour day started off with icebreakers. These ranged from bingo, to hangman, to the fan favorite of skribbl.io. Even students who were shy on Monday grew to laugh and interact with their peers. But after about 30 minutes, it was time to actually learn.

Within each subject of math, there was a standardized curriculum that consisted of both review and new material. Through the use of online whiteboards, powerpoints, and worksheets, the tutors taught the freshmen, even able to refresh old material in the process. Additionally, because everyone was split into small groups, tutees were able to have a more individualized learning experience.

Between quadratics, simplifying square roots, and trigonometry, the freshmen learned it all. But on the very last day, there was something special planned: a teacher/student panel. Over the course of an hour, freshmen were able to ask questions to all the Carnegie math teachers. Additionally, a panel of students involved in a variety of activities was assembled, allowing the ninth graders to pose their queries to actual students.

By the time math camp came to a close, the freshmen found themselves well-prepared, both in math and in CVHS knowledge, for the upcoming school year. Entering high school without a pandemic is scary enough, so thankfully this camp provided a much-needed transition into online learning.