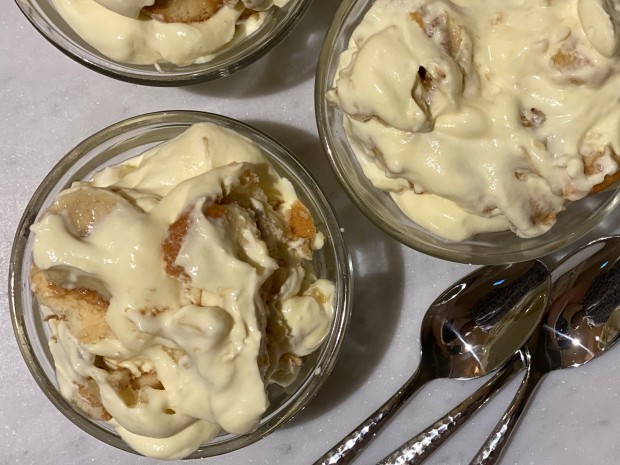 Magnolia Bakery's famous Banana Pudding is cool and easy to make at home, and requires no baking.

Famous treats are famous for a reason: They’re so yummy they’ve created a cult following.

You can’t get much more famous or cultish than the Banana Pudding from New York’s Magnolia Bakery. We first followed Magnolia for its cupcakes, before cupcakes were cool. We would wait in lines for them, because cupcakes weren’t everywhere in the early 2000s. Thankfully, we can get a cupcake fix at just about any bakery these days. What can’t we get? Magnolia Bakery’s Banana Pudding.

If you haven’t tried Magnolia’s Banana Pudding, you may ask why you need to. What’s the big deal? Banana pudding is pretty easy to score. Nope, this one is different.

This Banana Pudding somehow transforms sweetened condensed milk and pudding mix – you heard right, the box – into something fluffy and otherworldly. Like a big banana cloud studded with those childhood favorites, Nilla Wafers.

Labor Day is this weekend. It’s hot outside. Whip up Magnolia’s cool, no-bake Banana Pudding. The work to make it is minimal, but you will get maximum love for this one.

In a small bowl, on the medium speed of an electric mixer, beat together the sweetened condensed milk and the water until well combined, about 1 minute. Add the pudding mix and beat well, about 2 minutes more. Cover and refrigerate for 3 to 4 hours or overnight before continuing. It is very important to allow the proper amount of time for the pudding mixture to set.

In a large bowl, on the medium speed of an electric mixer, whip the heavy cream until stiff peaks form. Gently fold the pudding mixture into the whipped cream until well blended and no streaks of pudding remain.

To assemble the dessert, select a large, wide bowl (preferably glass) with a 4 to 5 quart capacity. Arrange 1/3 of the wafers to cover the bottom of the bowl, overlapping if necessary, then 1/3 of the bananas and 1/3 of the pudding. Repeat the layering twice more, garnishing with additional wafers or wafer crumbs on the top layer of the pudding. Cover tightly with plastic wrap and allow to chill in the refrigerator for 4 hours, or up to 8 hours, but no longer, before serving.