A screenshot of a video played during opening ceremonies with fireworks behind the University of Texas clock tower and a countdown to the start of the conference.

COVID-19 put an international pause on productivity for many students this past summer, but not for the The Village High School Model United Nations (MUN) team. On Saturday, July 25, 2020, members of the team attended the prestigious Central Texas MUN (CTMUN) Summer Conference virtually. The one-day conference was hosted by The University of Texas at Austin, which accommodated over 100 students in three different committee chambers. For over 25 years, delegates across Texas have come to CTMUN to debate the world’s most pressing global issues. However, the virtual shift made this conference unlike any other.

Model United Nations is a simulation of the United Nations, where students debate current international affairs. For the conference, students had the opportunity to choose between three committees: standard, crisis, and specialized. Throughout the day, topics ranging from collapsing global economies to the papal conclave were debated.

Especially in isolated times like these, keeping up with the world and the events around us is challenging. This conference was dense with content and topics to debate, and thus, students were able to better understand the situation of the world in these drastic measures.

“I learned a lot about competing in an online atmosphere and it was really interesting learning about the different types of economic policies and journalism policies for various countries,” sophomore Caroline Hsu said. “This experience definitely gave me a better understanding of the world as I realized the journalistic freedom we think we have in America is quite low compared to some European countries. Not only this, I got to see the profound effect of COVID-19 on every country, especially economically, journalistically, and in a time of crisis.”

Participating students include myself, Dhruv Saligram, Alexander Ilacqua, Caroline Hsu, Kahani Malhotra, Yazan Binnasser, Rohan Bendapudi, Parth Gupta, Connor Nguyen, Maria Morkas, and Divya Khatri. In addition to the awards, however, students logged off as more prepared and aware, with a general familiarity and understanding of how this upcoming year of MUN will unfold.

The Village High School attends the CTMUN fall conference every year, and therefore, attending this conference was imperative to understand how well the university will run conferences virtually. The conference gave students an outstanding glimpse into the online format.

“I specifically chose to attend this virtual conference to understand how the internet experience for MUN would be for more or less as preparation for online MUN conferences later.” sophomore Rohan Bendapudi said. “I really admired that CTMUN was done in the summer as a proof of concept for the actual CTMUN conference this November, so I can expect the November CTMUN to be much better.”

As one of the first universities hosting a virtual conference, UT did a phenomenal job running it as smoothly as possible. They easily juggled between efficient online platforms for various caucuses of the conference, which ultimately resulted in collaborative and productive committees. The dual platforms were highly controversial, but many found it effective.

“CTMUN was great at executing the dual platforms of Discord and Zoom,” said Hsu. “It was effective and I had a fun time with that. CTMUN also did well at arranging their schedule.”

However, for certain committees, technology did not cooperate as well and the combination of Discord and Zoom prove to be a challenge. Although UT attempted to make this as close to a real conference as possible, there were some hurdles that delegates simply had to adjust with.

“There were a lot of challenges, yet good moments,” said Bendapudi. “One of the biggest problems was easily the Zoom-Discord dual experience. Everyone used Discord rather than the actual conference on Zoom to convey their ideas to save time. Thus, for the chair, there wasn't a lot of context about the progress of the committee just through the Zoom meeting online. There were a lot of other issues, but the technical limitations were at the core.” 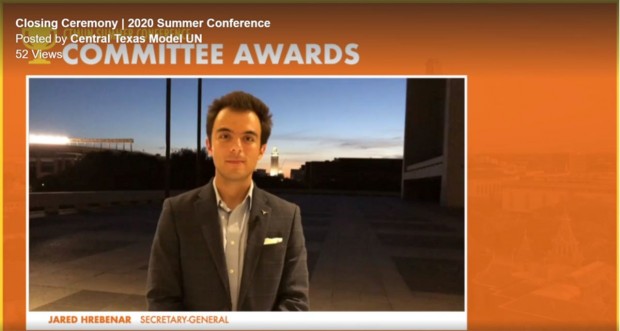 When you have such an interactive activity like MUN, where communication is the very premises of it, creating a virtual form of it is one of the most difficult tasks. The CTMUN Summer virtual conference was ultimately a groundbreaking form of MUN that The Village High School students had the privilege of experiencing. I can attest that I ended the day much more aware of the world around me. The conference gave me a glimpse not only of the swamp we stand in now, but the economical, journalistic, and humanitarian storm brewing in quarantine, which patiently awaits us on the other side of the pandemic.