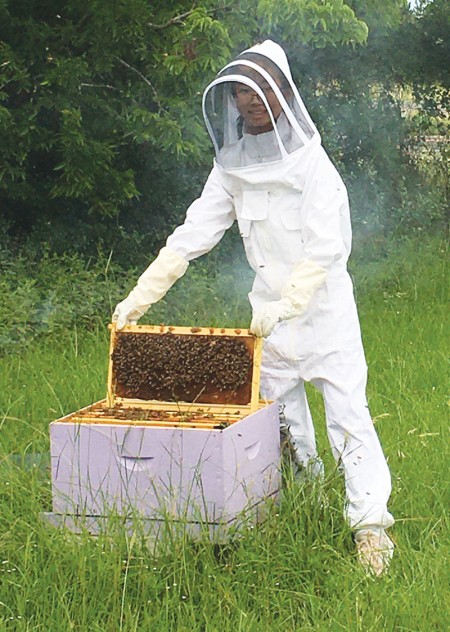 The pandemic has negatively affected most of us. However, the pandemic has also let some of us spend more time in nature. During this isolated period, I spent most of my time at my family’s ranch house in Navasota. This is where I learned how to become a beekeeper. The more I read about beekeeping, the more I recognized how fascinating this hobby is.

Honeybees work hard, support one another, and have great communication. Honeybee colonies consist of a single queen, hundreds of male drones, and up to 80,000 worker bees. An interesting fact about worker bees is that they do something called the “waggle dance,” which shows other bees where to find pollen. Karl von Frisch, an Austrian biologist, was awarded the Nobel Prize in 1973 for discovering the waggle dance.

Honeybees have an important role to play in the ecosystem. They pollinate our crops, provide a great food source of honey, and support the growth of plants, which serve as food and shelter for animals. Unfortunately, honeybee populations around the world are dying out. They are increasingly suffering from a disorder known as the colony collapse disorder (CCD), which is a phenomenon where worker bees disappear and leave behind the queen and its colony. Suggested causes for CCD include climate change, infections, overuse of various pesticides and stress.

As novice beekeepers, my mom and I visited a nearby honeybee farm to take lessons on how to take care of bees. After our lessons, we purchased a man-made beehive, protective clothes and beekeeping tools to get started. We then purchased a colony nucleus (nuc), which had a queen and about half of the amount of worker bees in a colony.

When we first visited our beehive, we had to use a smoker to help our bees stay calm. Last month, we were really lucky. During one of our visits, we got a full cup of honey.

Backyard beekeeping is doable and legal in the city; it can also revive local honeybee populations and provide much-needed pollinators. With all this downtime during the pandemic, perhaps you want to make beekeeping your new buzzing hobby, too.