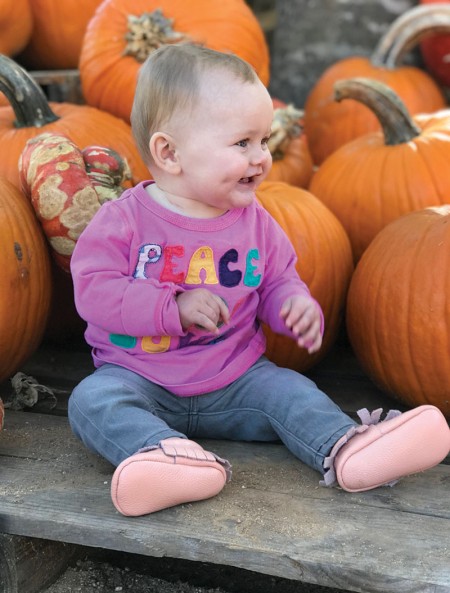 AT THE PATCH Pumpkin patches are a good first step to making jack-’o-lantern memories. Here, Georgia McQueen has her pick at Blessington Farms.

Nothing makes you feel more like a kid in October than hand-selecting a pumpkin and creating a jack-o’-lantern – sticking your bare hands inside to pull out ooey-gooey stringy guts and seeds and breathing in the smell of fall and Halloween.

A lot of Buzz families make it into an annual tradition – they order pizza, gather up all of the pumpkin-carving tools on old newspapers in the yard, and even do a dress-rehearsal run with their Halloween costumes.

My neighbors have an annual cousin night. The weekend before Halloween, they gather to carve pumpkins together and have a cousin sleepover. They line their finished pumpkins down the front walkway of their home to display their craftsmanship. The creativity gets a little competitive.

Jeremy and Myra Bowyer also carve pumpkins each October. The three Bowyer boys – Grant, 8, Cole, 7, and Beau, 4 – all get involved with the process. When Grant turned 2, Jeremy started the tradition of letting the kids design their pumpkins, and then he helps to carve the design.

The annual tradition will continue, they say, despite what happened last year, when the Halloween frights arrived early and in real life. Jeremy was carving their pumpkins when he accidentally sliced his hand. He needed a trip to the emergency room to get checked out, so Myra put the boys in the car and called her nearby parents. “I told them to expect three kids in their front yard in one minute,” she said.

Jeremy had to have surgery the following day. Still, the show went on, and the family trick-or-treated on Halloween night, as usual, and Myra continued with her plans to fly to New York City to run the New York City Marathon the day after Halloween.

The Bowyer family says that while last year’s trick was definitely not a treat, it will not stop them from carving again this year. They will just be extra careful.

Select a pumpkin with a stem, preferably a thick green stem that indicates the pumpkin is fresh off the vine and has thick side walls – so, when you cut into the pumpkin, it holds up.

Here is the messy part: cleaning your pumpkin. Believe it or not, it is ideal to leave the stem on (rather than cutting a circular opening at the top), so it can stay healthy longer, since the stem provides moisture to the pumpkin. Rather than cut the trap door for the light at the top, move it to the back of the pumpkin. Do this by cutting a hole in the back of the pumpkin to clean it out, remove the seeds and filling, and then place your light inside from the back.

To have a fresh Halloween pumpkin, don’t carve it too early. Another trick is to keep the pumpkin cool. Use a LED battery candle rather than an actual candle.

Find your inner artist and have fun with it. Plan out your design and use a thin black pen to draw – or print a template from Pinterest. Get creative with your pumpkin-carving tools. One Buzz dad used a drill bit to get the “perfect-shape eyes.” You can use any kitchen tool, such as larger spoons, smaller screwdrivers and lemon zesters.

Think beyond a jack-o’-lantern smile, with triangular-shaped eyes and nose. How about Olaf and Elsa from Frozen II? Or an Astros logo, which was popular when they played in the World Series back in 2017? It is not a bad idea to have a few back-up pumpkins in case you mess up.

Grocery stores always have pumpkins. If you’re looking for an excursion, there are pumpkin patches around Houston, such as Blessington Farms, Dewberry Farm, and the pumpkin patch at Old Time Christmas Tree Farm, that offer additional fall fun with hayrides, petting zoos and more.

Wherever you get yours and whatever you choose –  yellow, green, lumpy and bumpy, Cinderella or old-fashioned orange – congratulations on making it to fall.