On the road with the Kochs 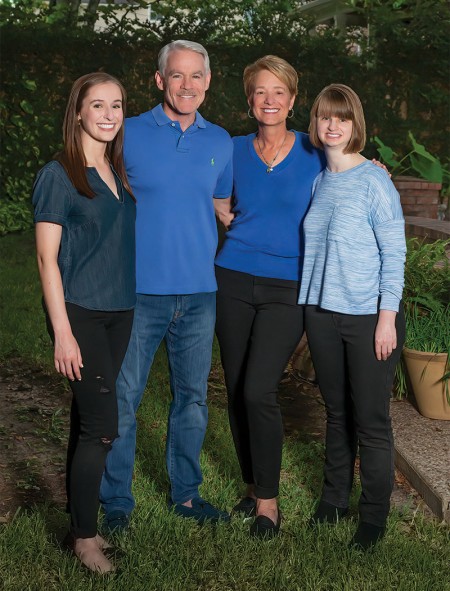 Emily, Tom, Brenda and Chelsea Koch (from left) love to travel as a family. In 2020, they are reliving favorite moments through photos. (Photo: lawellphoto.com)

Like many diehard international travelers, the Kochs are sticking closer to home in times of Covid. The two journalists have shared a hunger to see the world, and together they have traveled far and wide, both with and without their children. But this year they canceled two European adventures, opting instead to be near family in Wisconsin. And they’re taking advantage of the down time to go through their old photos and organize them, taking time to reminisce, and yours truly got to take a front-row seat in the Koch family travelogue recently, including enjoying an extended “Tom Spotting” (more on that later).

We caught up with Brenda in their Bellaire home, where she was pulling out photos from their family’s 2007 trip. “We were in St. Mark’s Square in Venice, and our arms were out, and the pigeons were landing on us… just going through these pictures is such a fantastic thing. It brings back the joys, the memories, the challenges.”

Memories from the Tuscan city of Sienna, where their apartment looked out over the picturesque piazza and the annual Palio, a legendary horse race dating back to medieval times. Challenges including daughter Chelsea’s in Cappadocia, Turkey, where she overcame her fear of heights to join the family on a sunrise balloon ride over a landscape filled with strange volcanic formations called fairy chimneys. The joy of La Semana Santa in Granada, Spain, during the elaborate Easter-season processionals that happen every night, with images of Jesus and Mary and other religious iconography being carried through the streets, with all the families and the kids on their dads’ shoulders looking on. And the sheer terror of watching their only offspring in a rickshaw, weaving in and out of traffic on a freeway in Beijing, where a trip to see the famous Chinese Acrobats became a marathon knuckle-biter. 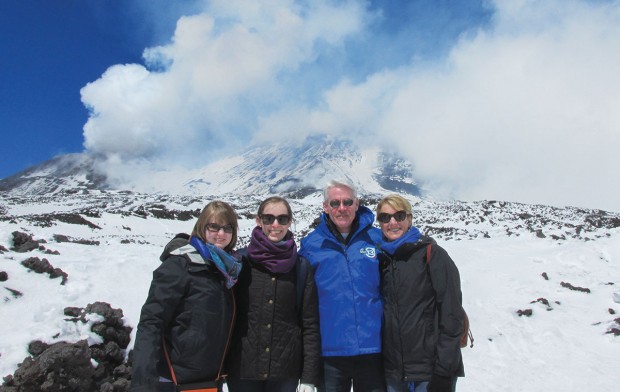 Chelsea, Emily, Tom and Brenda Koch, near the top of Mount Etna, the most active volcano in Europe.

Last year their brother-in-law in Wisconsin was diagnosed with a rare form of cancer, and he came to MD Anderson for treatment. In their time together, he mentioned that one of his dreams was to take his wife to Europe – so when he got through his treatment, they decided this year they were going to take that trip with the Kochs. Among other places, they had planned to go to Austria for a Sound of Music tour, Germany for castles and Oktoberfest, and Switzerland to hike in the Alps. And then – Covid. And while everyone was disappointed at the cancellation of this year’s trip, they have been making the most of it with a little armchair travel together.

“It’s so great to reminisce and remember the places we’ve been, see the photos and see your kids grow,” Brenda said. “I think it’s a great joy to see those places and incorporate them into how you look at the world.”

A friend advised Tom and Brenda to travel while the girls were young, saying, “You only have your kids for a certain number of years before they fly the coop.” They took the message to heart. Ever since their two daughters were old enough to travel, Brenda and Tom have been taking them on the road – first, road trips around the U.S., visiting national parks and other landmarks, and then, when they reached late grade school, further afield. But a funny thing happened; the girls flew the coop, and the family adventures have continued. 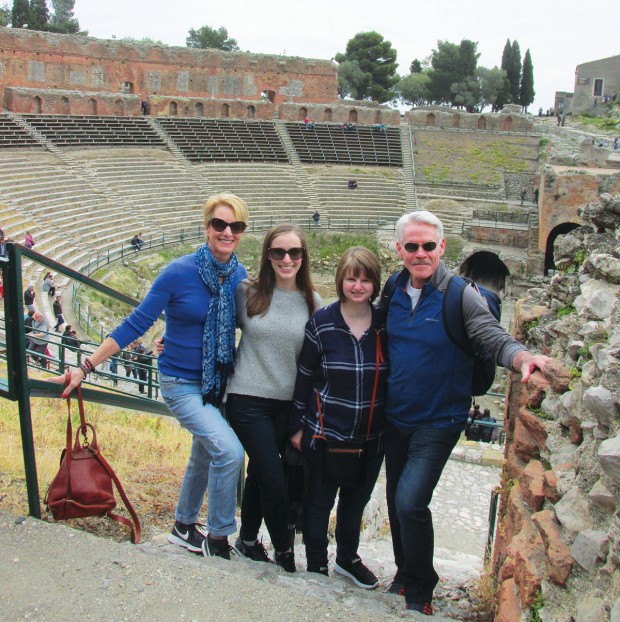 Brenda, Emily, Chelsea and Tom explore a Greek amphitheater in Taormina, Sicily, in 2019.

Tom is a veteran anchorman at ABC-13 Eyewitness News; Brenda is a former reporter. Emily, 25, is a UT-Austin grad who works at MD Anderson, and Chelsea, 29, a UH grad, works at Baylor in the Center for Comparative Medicine.

Brenda is not sure where the couple’s wanderlust came from, since both come from small-town families who never traveled extensively. But they found common ground on the road, and in 1985 they took planes, trains and automobiles from London to Morocco, meeting up with Tom’s sister and her new Moroccan husband.

Rick Steves has long been an inspiration, and his guides have helped them to steer clear of the tourist zones and immerse themselves in the local culture. They found that they could stay in a small family-owned inn or even a two-bedroom house in a local neighborhood for less than the price of a hotel room, booking through VRBO long before Airbnb became the rage.

“We find the family inns, so we get to meet people, and we find through them the local family-owned restaurants – that has given such a different perspective to our travels instead of flying in and going to the hotel where a lot of Americans stay,” said Brenda.

When Chelsea and Emily were old enough to really appreciate it, they circled back to London, but this time taking it a little easier – spending the entire vacation just in England and Wales, to break them in easily with a language they knew. The next year it was France and Italy, then Spain. In 2009, they went to China; in 2010, it was Germany and Switzerland. Then it was Greece and Croatia. Last year, it was Sicily. 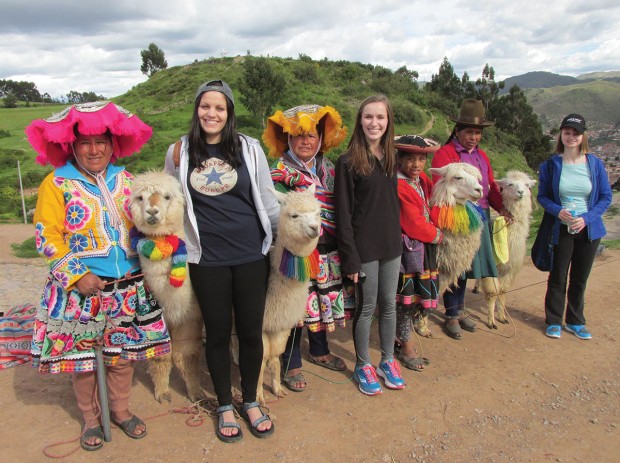 Cousin Nora Sahel joins the Koch family to tour the Sacred Valley near Machu Picchu in 2015.

The two girls quickly developed a love for their parents’ passion, taking to travel as a form of education. “They love history, culture, trying different kinds of foods – that’s been great fun to introduce them to all the places we’ve been. It’s been an education that helps you be more curious about the world.”

Frequently Tom’s big presence in the Houston area follows him around the world, and the inevitable “Tom Spotting” has become something of a family travel joke.

“Houstonians are everywhere; most people wouldn’t know it though, unless you’re wearing an Astros cap or something – but Tom’s been on TV for 38 years in Houston and certainly has a recognizable face.”

From Peru to Nashville to Beijing, it’s been a source of great amusement but also a source of connection to the world around them. One of the girls will say, “Dad, there’s been no Tom Spotting on this trip.” And the other will quip, “But there will be.”

The first few times it happened, they thought it was just a fluke. They’d hear whispering – “Is that Tom Koch?” and then, “Yeah, it is!”

And sure enough. In Machu Picchu, Brenda was walking slowly, with a cane, as she had just come through a tough breast cancer treatment, and the trip was one of the ways she began to take her life back. 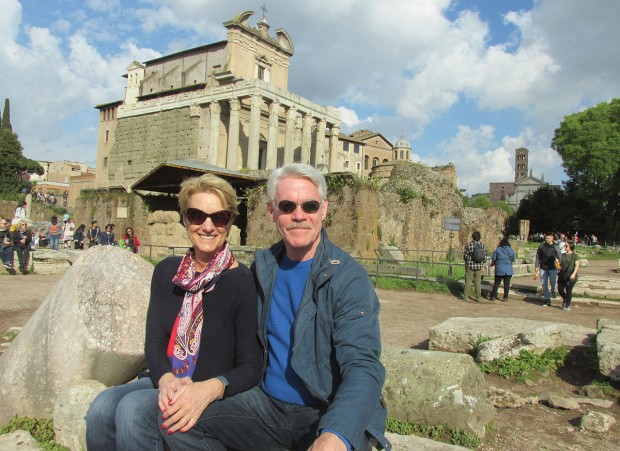 Brenda and Tom in the Forum in Rome, the ancient center of Roman life.

Suddenly they heard a cheerful voice. “Hi, Tom – How are you? We’re from Sugar Land!”

No matter how many times it happens, they never tire of it. “You meet people – and they are lovely, and they’re kind,” said Brenda. “They’re just interested in sharing their experience, and we share ours.”

The family went to Shanghai when some of Emily’s best friends from middle school moved there for work and invited them. “You should come visit us,” they said.

“You need to be careful about inviting us – we will come!” Tom jokingly warned.

Tom scored some low fares – one of his “miraculous” talents, according to Brenda – and they headed to Shanghai. After their friends showed them around the city, they headed to Beijing, and there they were at breakfast – pancakes, tea-soaked hard-boiled eggs and baby bok choy – talking about the low probability of a Tom Spotting here in China. Suddenly they looked toward the door and there was Tom chatting with a tall gentleman with a big Texas belt buckle.

They were oil and gas expats from Katy, Texas, and they insisted on showing the family around the city – taking them, among many other places, to the pearl market, where they were able to secure local prices – not American. And they loaned the family their driver for three days. 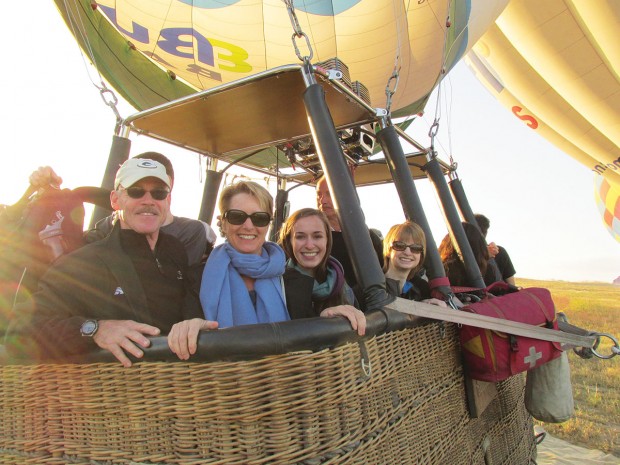 Tom, Brenda, Emily and Chelsea Koch (from left) get a breathtaking view of Cappadocia's famous fairy chimneys from a hot air balloon at sunrise, in Turkey in 2013.

Reminiscing back home, Brenda, Tom and the girls sat around their dining table, old photos scattered in front of them, each of them tossing out memories and building on others. Tom tried to draw out his daughters, directing the questions to them. On the question of Tom Spotting – “Does it ever get tiring?” – on the contrary, Tom assured me.

“We’ve met a lot of wonderful people this way, and it's very cool,” said Tom. “And you know, we've learned this ourselves coming from small towns: Travel really broadens your vistas and kind of eliminates biases, your prejudices. It shows you that everybody's really after the same things in life. They say that travel leaves you speechless, but you come back, and you're a storyteller.”

These days they are feeling sad about the current state of the world – between the pandemic and political instability, travel has become more complicated, and in many cases, inadvisable. Still, these veteran wanderers are just as committed to travel as ever. On the one hand, says Brenda, it can be enlivening to practice the art of travel closer to home; it doesn’t have to be far away to be an adventure.

“Travel will be back – whether it’s going to our national or state parks; there’s so much to see wherever you live. And just to maintain that curiosity is important; to educate yourself and to learn more. We’re socially distancing right now, but you can be a tourist in your own town once we have a vaccine and it’s safer – you can go to Austin or San Antonio and be a tourist again. I think that’s one thing that’s come out of this; everyone is hunkered down with the challenges we have right now.

“I encourage people to go out and take a day trip. See something outside your comfort zone – take that trip you’ve always been meaning to take. That’s a lesson from age and from being a cancer survivor.”