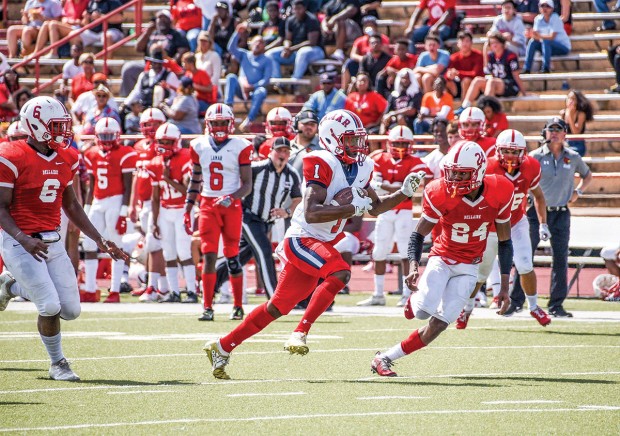 TERRIFIC TEXAN After a delayed start to the season opener, the Lamar Texans were eager to repeat scenes like this from last year. Shown here is Texans wide receiver Roshane Cruickshank breaking free on a big play in the Texans’ district victory over rival Bellaire. (Photo: Elaine Matte Mut)

With the coronavirus pandemic having taken a heavy toll on high school sports dating back to the cancellation of the UIL state basketball tournament in March, the month of October offers new hope, excitement and a fresh start for local football teams who returned to game action for the first time since the start of the pandemic.

“I think the excitement for the season is at an all-time high,” said Lamar Texans head football coach Mike Lindsey. “While there’s certainly a lot of nerves on how all this might go, we’re just happy to be playing football again.” With a scheduled season opener against The Woodlands Highlanders Oct. 2, the Texans have been facing a new set of challenges to prepare for the first game.

“For starters, we are looking at practicing only outside the school day around 4 p.m., as opposed to previously having an athletic period. We are testing kids every day with temperature scans, Covid questionnaires, while having the players wear masks when they’re not actively working out. The coaches are wearing masks at all times. We’re also not sharing water bottles and doing so much more to be as safe as possible. We’ll find a way to make it all work and adjust accordingly.”

With some collegiate football conferences canceling their seasons, the concern for the fate of the high school seasons certainly was heightened. “We definitely were worried when some of those conferences announced they weren’t playing this fall. Fortunately, we have had good communication with our HISD athletic director, and the UIL has done an excellent job of communicating a plan for the season,” said Lindsey.

“Still, we need cases to continue to drop in Houston to give us more confidence for the entire season to be played. Also, in the coaching profession, we have to be just as careful. What happens, for example, if I came down with a case? Then we would be without a head football coach for about two weeks.” 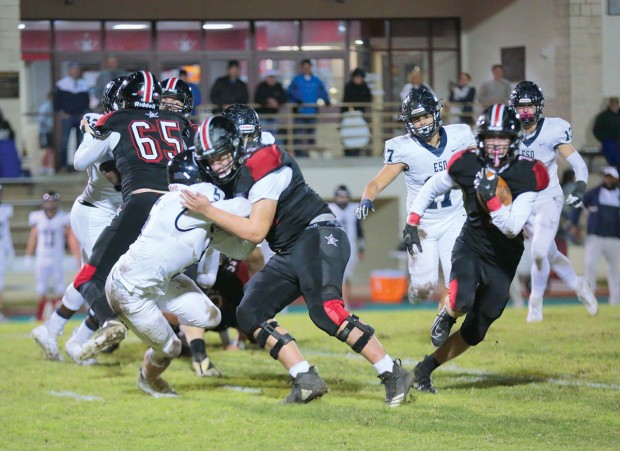 MOVING FORWARD The St. John’s Mavericks are eager to return to the gridiron for plays like this in last season’s game versus the Episcopal School of Dallas. Mavericks running back Miles Masterson goes for a big gain behind the block of offensive lineman Eric Johnson. Also shown blocking for St. John’s is senior lineman (#65) Mansfield Owsley. (Photo: Gina Johnson)

With the Southwest Preparatory Conference canceling its fall sports championships in the wake of Covid-19, local SPC schools such as Episcopal, Kinkaid, Houston Christian and St. John’s are doing their best to navigate through these uncertain times. “Our administration is taking a phased approach, with the goal of some sort of competition as we get into the later part of fall,” said St. John’s head football coach Kevin Veltri.

As of press time, it remained unclear on just how many games would happen or if there would even be a football season for the Mavericks. “We haven’t set a target date. Our administration is taking the safest possible approach. The school definitely recognizes the benefits of athletics, and they’re trying their hardest to make it happen,” said Veltri.

As for the cancellation of the SPC fall championships, which also affects volleyball, cross country and field hockey, Veltri says it’s a disappointment on multiple levels. “We have great relations with these schools, and to not compete for a championship is tough. I put myself in my shoes when I was a high school athlete, and sports was everything to me. However, I do not envy anyone who has to make these difficult decisions. We’re also trying to show our kids that while it may be a disappointment right now that there are also life lessons to be learned.”

It is a new era for the Bellaire Cardinals volleyball program, with Nicole Blakeman taking over as the Cardinals’ new head coach. Blakeman replaces retiring, long-time head coach Ap Clarke, who led the program to 19 consecutive playoff berths, including numerous district championships.

As if those aren’t tough enough shoes to fill, taking over as a first-year head coach in the wake of a pandemic certainly presents its own unique challenges. For starters, Blakeman wasn’t even able to meet with her new players in person for the first time until a couple of weeks before the start of the season.

“It’s a whole new experience for everybody,” said Blakeman, whose 25 years of head-coaching experience includes nine years at Clear Lake High School and, more recently, three years at Navarro High School. “The biggest challenge is the same challenge we’ve all been dealing with, in the constant fluidity of the situation. We had to cancel and reschedule repeatedly throughout the summer. I’m just excited to be back in Houston and coaching at a really good volleyball program here at Bellaire.”