By John Schaffer, | November 24, 2020
Book Buzz
Sign in to buzz me about Book Buzz
Click the Buzz Me button to receive email notifications when this writer publishes a new article or a new article in this column is published. 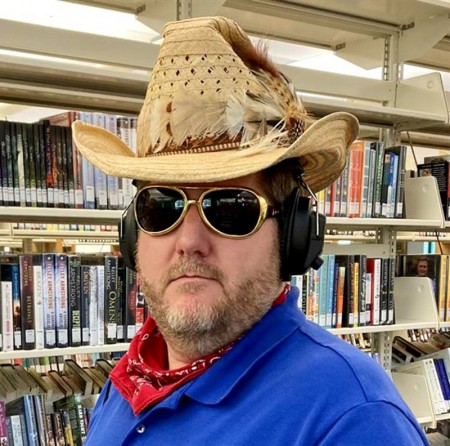 Curbside Larry is here with an audio book review of David Sedaris' Calypso.

Hey Folks, Curbside Larry here with an audio book review for ya!  We all know Texas has some long highways and of course Harris County has its fair share of epic commutes.  So, in recent years I started listening to books while driving as sort of a way to multi-task.

Ya see, finding enough time to read as many books as I’m interested in is dang near impossible so I finally had to acquiesce on what I had always believed was the correct, traditional way to read a book and started listening instead. And what do ya know, like a duck to water I was hooked.  Don’t get me wrong, there’s still nothing better than slipping off your boots and relaxing in the big chair for a night of reading the regular way, but now my audio books keep me entertained while I’m on the go.

That brings me to my recommendation of David Sedaris’ Calypso. This audio book is firing on all cylinders in my humble opinion. And if yer not familiar with who David Sedaris is, let me give ya a little primer. He burst on the scene in 1992 when National Public Radio broadcast a recording of him reading his essay, The Santaland Diaries. Since then, that recording has become a holiday staple on radio stations all over the world. It’s about Sedaris’ personal experiences while working as a department store elf in the Christmas display at New York City’s Macy’s store. That recording generated so much positive press that Sedaris was able to capitalize on his newfound fame and go on to publish numerous best sellers and became a darling of the late-night talk shows.

In 2019, Sedaris released his eleventh major work, Calypso to much critical and popular acclaim. This book travels into some new territory for Sedaris which might catch some of his loyal fans off guard at first, but they will most certainly appreciate the depth as the book progresses. In addition to the laugh out loud take on the world Sedaris is known for, he now addresses some much more serious topics like the death of his sister and facing his own mortality. Sedaris handles the darker subject matter with wit and aplomb. Sedaris narrating his own audio books with his signature, lilting North Carolina dialect is also a huge plus as it makes the material more personal. Comedy, as they say is all about timing and Sedaris’s meter and tone rival the greatest of comedians. He has become a premier orator of this generation and performs his essays, as opposed to just reading them. Calypso has the beauty of a boxer in his prime and will undoubtedly go down as one of his best works.

And folks, you can start listening to it today as an eAudiobook through Harris County Public Library’s LIBBY App on your phone, tablet or computer.

David Sedaris has also just published a collection of some of his most popular works This is available as well at the Harris County Public Library.