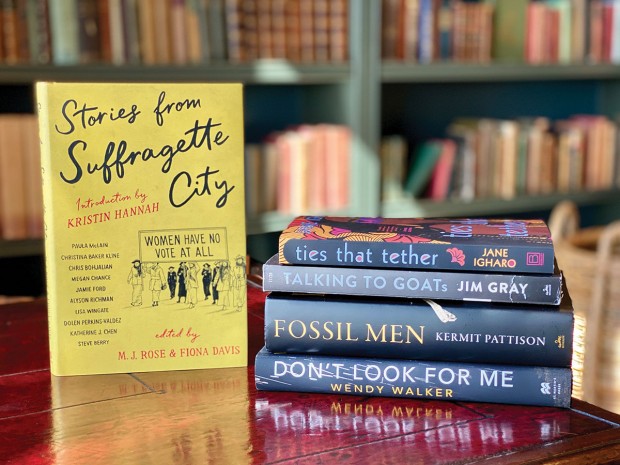 WHAT TO READ This month's picks include a short story collection about the suffrage movement, two nonfiction titles, a clever thriller and a fun rom-com set in Canada.

Don’t Look For Me by Wendy Walker – Molly Clarke disappeared one night with scarcely a trace, and her family doesn’t believe that she chose to walk away from them and the tragedy that defines them all. When a new lead surfaces soon after the investigation stalls, Molly’s daughter Nicole decides to investigate in the poor, decrepit town where her mom was last seen. Alternating between Molly’s and Nicole’s perspectives and shifting back and forth in time from Day 1 of the disappearance and Day 14 as Nicole launches her own search, the story rapidly unfolds as the reader learns more about Molly, Nicole and the creepy town of Hastings and its inhabitants. Don’t Look For Me is Walker’s best thriller yet, and the twists kept me on the edge of my seat until the clever and satisfying resolution.

Fossil Men: The Quest for the Oldest Skeleton and the Origins of Humankind by Kermit Pattison – A group led by the renowned fossil hunter Tim White discovered a skeleton in the Afar region of Ethiopia in the mid-1990s that significantly altered scientists’ understanding of human origins, but simultaneously triggered a seismic rift in the scientific community. Based on the radiometric dating of nearby rocks, the group determined that the bones were 4.4 million years old, making “Ardi” (as they nicknamed the bones) more than 1 million years older than “Lucy”, the previously oldest-known skeleton. In compelling detail, Pattison brings to life the discovery and the resulting drama and the importance of science in helping humans understand their origins.

Stories from Suffragette City edited by M.J. Rose and Fiona Davis – To commemorate the 100th anniversary of the 19th Amendment, which gave some women the right to vote, Davis and Rose decided to assemble a historical-fiction compilation of short stories that all take place on Oct. 23, 1915, the day tens of thousands of women marched down Fifth Avenue in New York City for the right to vote. The collection contains an introduction by Kristin Hannah and stories by 12 authors, including Lisa Wingate, Paula McLain, Chris Bohjalian, Steve Berry, Christina Baker Kline and more. While each story stands alone, they all are tied together by a unifying thread that weaves throughout the tales. My favorites are “A First Step” by M.J. Rose, “Deeds Not Words” by Steve Berry, and “The Last Mile” by Fiona Davis. The stories cover a range of socioeconomic, cultural and racial perspectives.

Talking to GOATs: The Moments You Remember and the Stories You Never Heard by Jim Gray – Award-winning sportscaster and interviewer Jim Gray reflects on his career, specifically on his interviews and relationships with sports legends. He includes moments that made history, but he also writes about events such as how his infamous interview with Kobe Bryant concerning Shaq and the Lakers came about and his years-long pursuit to tell the story of George W. Bush’s decision to throw the first pitch at the World Series opener in New York following the Sept. 11, 2011, terrorist attacks. Gray’s frank and informal style lends itself well to his recounting of the standout moments in his career, which are often also monumental moments in his subjects’ careers as well. Talking to GOATs is a quick and entertaining read and a fascinating glimpse into the lives of icons.

Ties That Tether by Jane Igharo – Jane Igharo addresses issues of culture, identity and the stress of family pressure in this clever and fun romantic read. Azere, a Nigerian immigrant who moved to Canada when she was young, develops feelings for a white man named Rafael. Azere had promised her dying father she would marry a Nigerian man to preserve their culture and traditions, and her mother insists she abide by this deathbed promise. While Azere does her best to avoid Rafael, he is hired by her company, and Azere struggles to balance her mother’s wishes and her desire to forge her own way. While reading this one, I learned a lot about Nigerian culture and traditions and just thoroughly enjoyed the story from beginning to end.