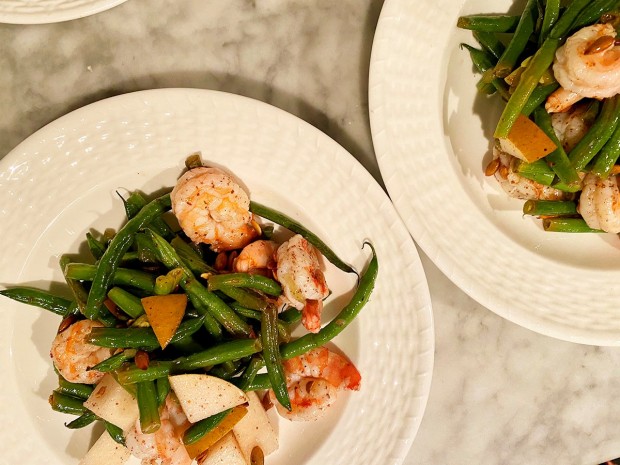 Make a light and lemony green bean salad this week.

Sometimes (a lot) I come across a recipe that looks so good I put the ingredients on my next grocery list. This is (sort of) one of those recipes. We were glad we tried it.

Bon Appetit published a recipe for Smashed Green Beans with Lemony Sumac Dressing in its 2020 Thanksgiving issue. I personally think that at Thanksgiving we all want creamy green bean casserole over something light and bright like these green beans. But for a Tuesday night, they sounded delicious.

I love the tangy, lemony taste of the Mediterranean spice sumac. It’s easy to find in the bulk spices and looks almost like chili powder. Whisked into a lemon and olive oil dressing, it gives a big pop of flavor that is more complex than lemon alone, kind of like a secret ingredient. Green beans marinated in this dressing are addictive. The Asian pear adds sweet and crunchy, along with pepitas, also crunchy, and nutty. Because we were serving this salad for dinner, we threw in some cold boiled shrimp to marinate with the green beans. This is going into our regular repertoire.

Maybe it’s not totally Thanksgiving-ish, but weeknight dinners are about to get more exciting.

Preheat the oven to 400 degrees.

In a small saucepan over medium-high heat, cook the oil and pumpkin seeds. Stir occasionally, until the oil around the seeds is sizzling and the seeds are golden, about 4 minutes. Strain the pumpkin seeds through a fine-mesh sieve into a small bowl; set the oil aside. Transfer pumpkin seeds to a paper towel-lined plate; immediately season with salt and pepper. Let cool.

Whisk the lemon juice and sumac together in a large bowl; season with salt and pepper. Gradually stream in the reserved pumpkin seed oil, whisking until incorporated. When the green beans have roasted but are still warm, smash them slightly with a rolling pin so that they split open. Cut the green beans into 1-inch pieces and transfer to the bowl with the dressing. Add the shrimp. Toss to coat everything in the dressing, cover and refrigerate for 2 hours.

When ready to serve, cut the pear into ½-inch-thick wedges, then cut again crosswise. Add the pear to the green beans, then add the pumpkin seeds. Toss well.