Mexico: To stay or go 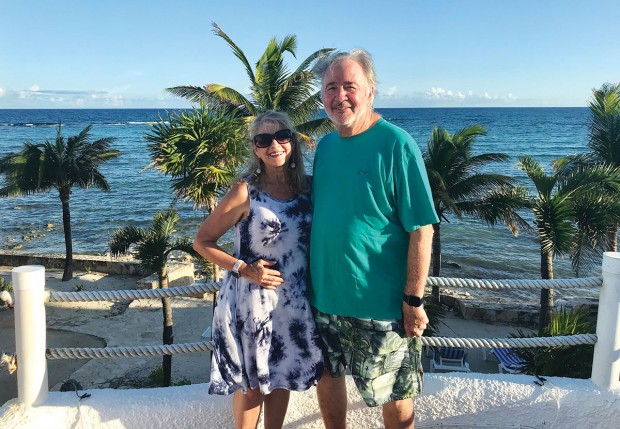 MI CASA, TU CASA Sharon and Mike Brier have enjoyed a love affair with Mexico for 50 years, the last 40 of them in Akumal, where they own a timeshare at Casa Mayanah.

If you’ve been wondering whether it might be a good idea to head south and sit out a bit of the pandemic on a Mexican beach or in a historic colonial city, you are far from alone. To stay or to go – that is the essential question this holiday season.

And while undoubtedly it is less risky to stay at home, the emotional costs of doing so after closing in on a year are arguably growing higher. So we decided to check in with a few of our recent Mexico travelers – including a couple who have now become Mexico homeowners — to get a sense of the situation on the ground.

Full disclosure: I live in Mexico, so I have been here – though far from any beach – since the beginning of the pandemic, returning to the States only for the month of September; even at the heart of a city comparable in size to Houston, it feels generally safer to me here. There are a number of reasons for this, which we will explore through the eyes of these Buzz residents.

It begins with Sharon Brier and her husband, Mike, whose love affair with Mexico began five decades ago. Their first years they usually stayed in Acapulco and Mexico City. But 10 years after they began traveling to Mexico, they learned that friends were building a huge and beautiful house in Akumal in the Yucatan, so they went to check the place out. 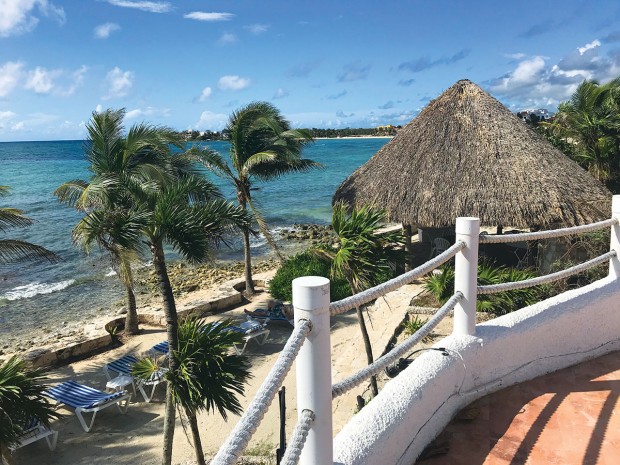 Here’s a view from the balcony of Casa Mayanah, with the palapa in the background (the thatch-roofed shelter).

An imposing Alamo-like exterior with striking architectural features halfway between Tulum and Playa del Carmen, the place caught their fancy, and they decided to buy in along with six other families, which now, in the second generation, have grown to 15. They’ve been sharing time – time-share style, one family at a time – at Casa Mayanah ever since.

At first, the idea was to use the house for family reunions, so that the cousins could spend time together and get to know each other. As the kids grew up and moved on, the retreat became a place to invite friends, including Steve and Marilyn Saks and Larry Feingersh. One golden week in October 2020, Casa Mayanah became a haven for these Texas ramblers.

“I think it’s a little piece of paradise,” said Sharon. “We felt secure in going there; it’s a remote area, and people were taking precautions.”

Protocols in many parts of Mexico are strict, with mask-wearing required to enter stores, restaurants and other establishments, where staff greet incoming guests with a hand-held thermometer and a bottle of disinfectant gel and require groups and families to wait outside while one person at a time enters the establishment, to avoid crowding. Disinfectant mats for the entryway floor are a common fixture.

These protocols are standard throughout the country’s tourist destinations, explained Isaac González, an epidemiologist and public health specialist who works within the hotel and restaurant industry throughout the Riviera Maya and helps to implement training programs for hotel staff.

Sharon had heard about the protocols from her friends Marjo and JW Leussink, who had recently moved to San Miguel de Allende, so she and Mike decided to take a chance.

The first week in October was their family’s week for the timeshare, but Sharon had almost given up on it this year – not because of conditions in Akumal, but because of the prospect of boarding a plane. Mike, at 72, was reluctant to risk it, and hadn’t flown since February. Sharon had already canceled a girls’ weekend at the house. 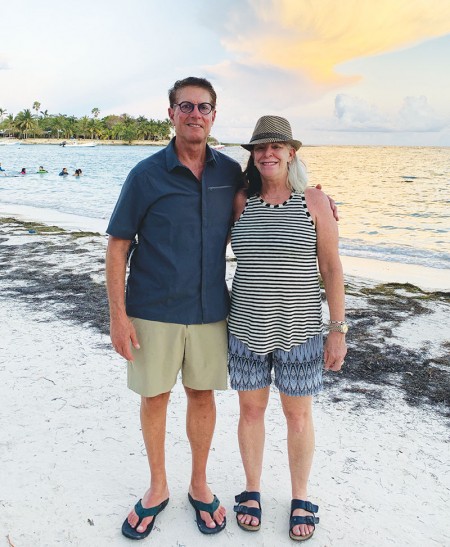 Steve and Marilyn Saks (right) joined them there for a quick getaway in October.

Eventually, love won out, and the couple planned a trip to see their grandchildren in Portland. But as the departure approached, wildfires raged around the city, and it didn’t seem wise. Sharon decided to parlay the travel commitment into a trip to their happy place on the beach, and Mike took the bait. So, with a week’s notice, Akumal it was.

She put out the word, and Steve and Marilyn and Larry jumped at the chance. Their plan was to hang out on the beach and visit with Michael and Diane Caplan, Buzz residents who have recently built a home in Tulum, just down the coast from Akumal.

As it turned out, the flight was indeed the riskiest part. Steve and Marilyn took Southwest Airlines and found an open middle seat throughout the plane. Sharon, Mike and Larry flew United and found the flight nearly full, but face masks and hand sanitizer were mandated, so they weren’t terribly concerned. Arriving in Cancun, however, was a trial. First they deplaned on the tarmac and were crowded onto a shuttle, where distancing was nearly impossible. Then they were obliged to wait in crowded conditions in customs for an hour and a half.

Fortunately, they made it to their destination apparently virus-free, and the Caribbean blue gaze that awaited them was worth the harrowing transit.

“Once we got to Akumal, we felt safe,” said Steve. “We felt like everywhere we went they took our temperature – even at happy hour on the beach, they would take your temperature and put hand sanitizer on your hands.”

Highlights included snorkeling, the architectural museum in Tulum, happy hour at Lol-Ha in Akumal, beach walks, games and being at Casa Mayanah itself, with its curves and open spaces and four ample bedrooms, each one facing the sea. The front of the house looks out on the bay; down the street is the spectacular Yal-Ku Lagoon, where they snorkeled among parrot fish, zebrafish and many other colorful specimens. 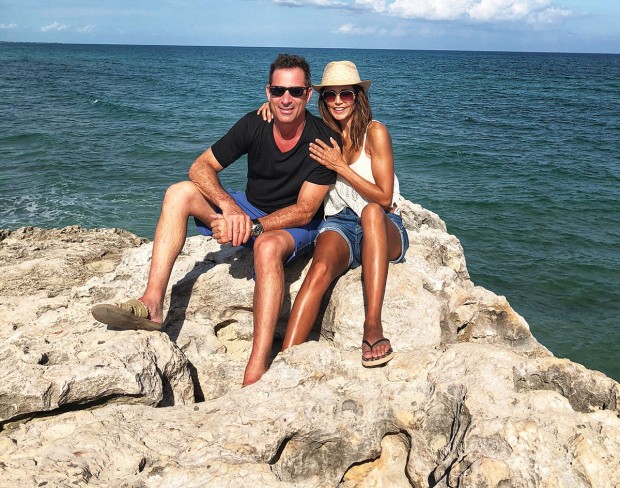 CARIBBEAN BLUE Michael Caplan and wife Diane relocated to Tulum during the pandemic and are telecommuting to their businesses in Houston.

For Michael and Diane, the decision to go to Mexico and stay during the pandemic was a no-brainer. They’d already decided to build a house in Tulum and had hired the contractor and begun the work when the pandemic hit. Diane, a marketing consultant, and Michael were on lockdown and forced to work from home. “We said, ‘Hey, I think we can do this,’” said Michael. “I’m doing Zoom videos with my employees and she with her clients, and it proved to us that we can work remotely.”

Being in a small town on the Caribbean coast felt inherently less risky than Houston to both of them.

“We feel safer down here than we do in Houston in this pandemic,” said Mike, who is now running his café business remotely, for the most part, from his new home in a gated enclave in Tulum. Every five to six weeks he travels back to Houston to check in with his coffee shops.

Their home is in the jungle, with currently only two neighbors within walking distance. And when they do go out, the risk seems minimal. Mask-wearing in Tulum is nearly universal, for one thing.

“I like the idea of wearing a mask and keeping other people safe,” said Mike. “And when we do eat out, everywhere we do eat we’re always outside in the breeze, and that makes me feel safer as well.”

While the Caribbean gems of Tulum and Akumal may be humming, as are Pacific beach towns like Los Cabos, Puerto Vallarta and those along the so-called Gold Coast of Oaxaca, San Miguel de Allende is barely a whisper of its normal party-hearty self.

Marjo and JW Leussink, formerly of The Netherlands and then Houston, recently bought a home in the UNESCO-recognized colonial city. It’s still as beautiful as ever, with its wedding-cake parroquia, or cathedral, and its mountain-ringed views. But these days, you could shoot a cannon through its emblematic central plaza, normally a vibrant hub of artisanal activity, said Marjo. And the social life that distinguishes the place has come to a halt. 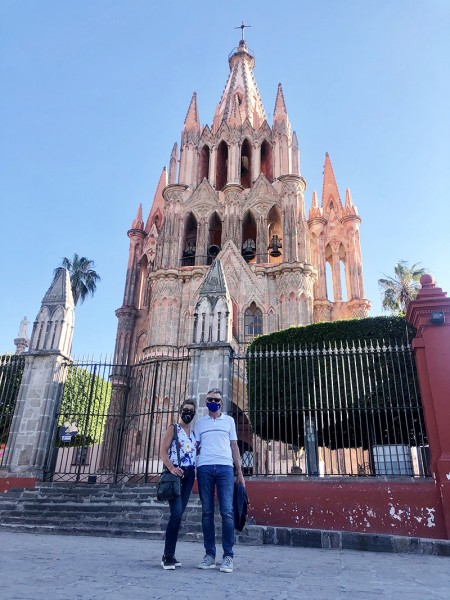 SAN MIGUEL Marjo and JW Leussink strike a socially distanced pose in front of La Parroquia de San Miguel Arcángel, the Gothic cathedral at the heart of San Miguel de Allende that is one of Mexico's most-photographed churches.

It’s been a little disappointing for the couple, who moved to San Miguel as a base for their coming forays throughout Latin America, which they’d been wanting to explore for years. Not long after their move, the pandemic hit.

“Everything was closed for six months,” said Marjo. “Finally they opened some restaurants and coffee shops, but they’re very careful – and I like that. They closed off the Centro [historic center], so the garden across from the parroquia is closed… It’s more or less a city asleep.”

Moreover, being a highland city, nights can get pretty nippy, and mornings are cool. For visitors who are fond of solitude and are there to enjoy the stunning architecture or to explore the nearby nature reserves, it’s a great place to go. If you’re looking for a party, not so much.

For now, Marjo and JW are mainly hibernating – except for the occasional forays to make purchases or to explore the nearby wildlife reserves. But they know that this, too, shall pass – and when it does, they will be ready.

“There are so many places in Mexico that are beautiful and different. You can almost spend your life there,” said Marjo.