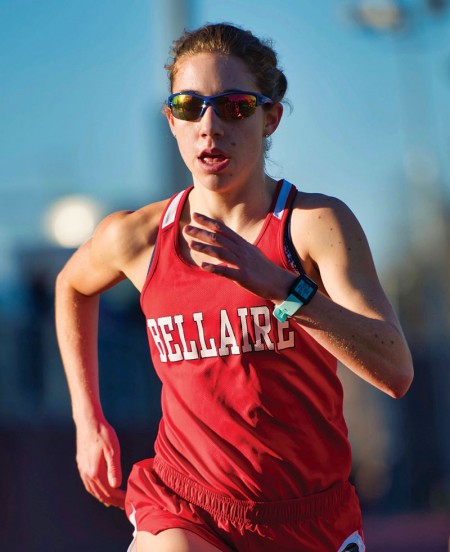 With three consecutive runner-up finishes at the UIL District 18-6A cross-country meet, Bellaire Cardinals senior Cate Urbani was determined to break through with her first individual district championship.

Sure enough, Urbani ran to victory in a winning time of 18:54 over the 5k course. “It was really special. To finally get that victory in my senior season was an incredible moment,” said Urbani.

A state qualifier two years ago as a sophomore, Urbani came within a second of running a personal best time while winning the race by a hefty margin of 2:12 seconds over second-place finisher and Bellaire teammate Anh Ho. “I’ve been training extremely hard and felt like I was in my best shape ever. I was hyped up and able to run one of my best races,” said Urbani. 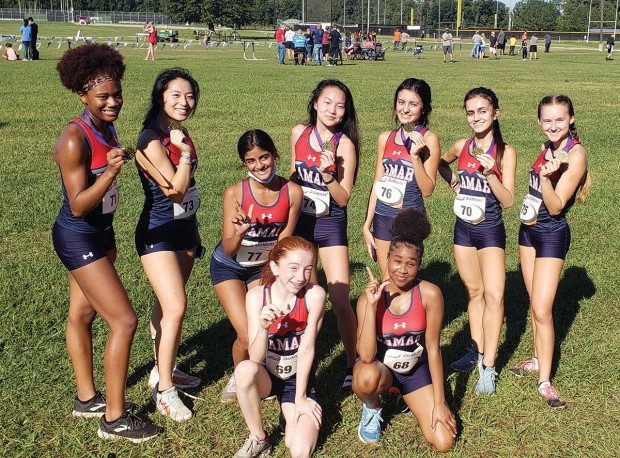 DISTRICT CHAMPIONS The Lamar Texans raced to victory to win the team title at the UIL District 18-6A cross-country meet. Lamar edged out Heights and Bellaire for this year’s championship.

Meanwhile, the overall girls’ team title was won by the Lamar Texans, who edged out Heights and third-place finisher Bellaire for the District 18-6A championship. “I thought it was a huge accomplishment,” said Lamar senior runner Dina Owers, who finished in sixth place. “We hadn’t qualified for regionals in several years, and we improved so much with our new coach. This is something really amazing for this group of girls.”

“I came over from Sam Rayburn High School this past summer, but with everything going on with the Covid pandemic, I wasn’t really able to work with the girls over the summer. Still, I couldn’t have asked for a better group to make this kind of tough transition,” said Texans first-year head coach Brandon Cosler. “The team accepted everything I asked from them all season. They trained extremely hard, and it’s really rewarding to see that kind of effort pay off with a championship. This is why you get in the business of coaching.”

On the boys’ side, the Bellaire Cardinals won the District 18-6A championship by a dominant 26-point victory margin. Leading the way was Cardinals sophomore Zain Hamdani, who won the individual championship in a scorching time of 16.39 seconds over the 5k course. “We had a really fast senior last year [Koet Jimata] who led the way for us, so to come in and finish first as a sophomore is really cool and exciting,” said Hamdani.

“Even though we couldn’t work out as a group during the summer because of Covid-19, we all still trained extremely hard and kept it going once the season started,” said Hamdani. “We were only able to compete in four meets, but we won all four of those races. Our two seniors really gave us the kind of work ethic to be successful.” 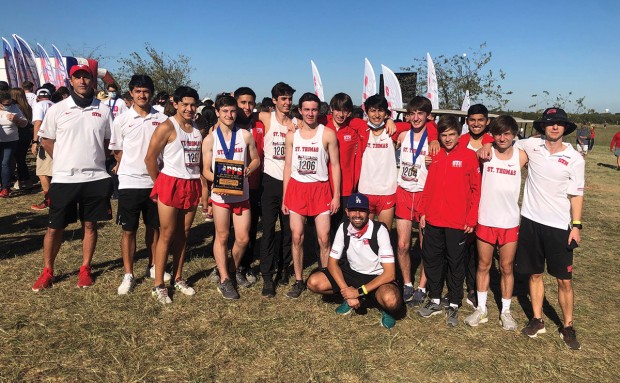 STATE RUNNER-UP With five of their runners finishing within 30 seconds of each other, it was a successful team effort for the St. Thomas Eagles at the TAPPS 5A state cross-country meet. The Eagles finished as state runner-up for the second straight year.

Among the private schools, the St. Thomas Eagles finished second in the state for the second straight year at the TAPPS 5A state cross-country meet. “I was very proud of the way the boys ran,” said St. Thomas cross-country coach Nathan Labus. “They ran as a pack all year long, and even at the state meet, our top five finishers all crossed the finish line within 30 seconds of each other.”

“Our guys ran for each other more so than as individuals,” said Labus. “They were extremely unselfish. Plus, credit our seniors for setting the pace for us to get that second-place finish.”

In addition, the Eagles’ average finishing time for their top five runners was the second-fastest time among all divisions at the state meet. “You’re talking about hundreds of runners across the 1A-6A levels, and to finish with the second-fastest average time is extremely impressive,” said Labus. “It was a great race for our guys.”