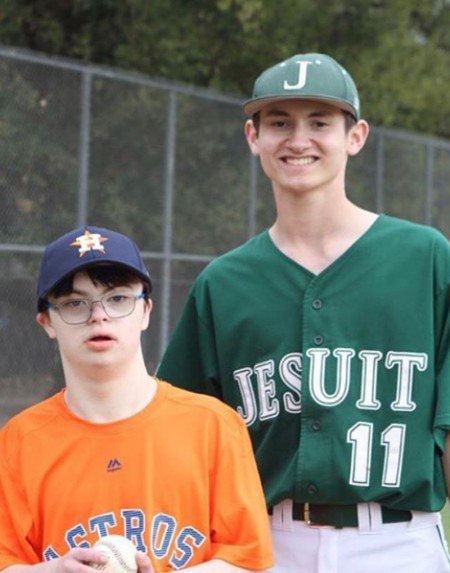 Strake Jesuit junior Garrett Stratton recently announced his commitment to play baseball for Rice University upon graduation in 2022. However, Garrett’s arrival as a Division I player is far from usual, so let’s look at what led to his success. Garrett was born in Houston but moved to Missouri at a young age; he lived there until the start of high school.

In the spring of 2018, his family moved back to Houston, and he was admitted to Strake Jesuit for the upcoming school year. The seed for his eventual commitment to Rice was planted during that time period because he played in his first basketball tournament for Strake Jesuit at Rice University. Garrett stated, “It was a really great experience for me and a fun way to play as a Crusader for the first time.”

As an incoming freshman, he received the Ignatian Scholarship, a prestigious award that pays fifty percent of the first year of tuition to five academically promising freshmen. He said, “I wanted to make the school’s investment in me pay off.” 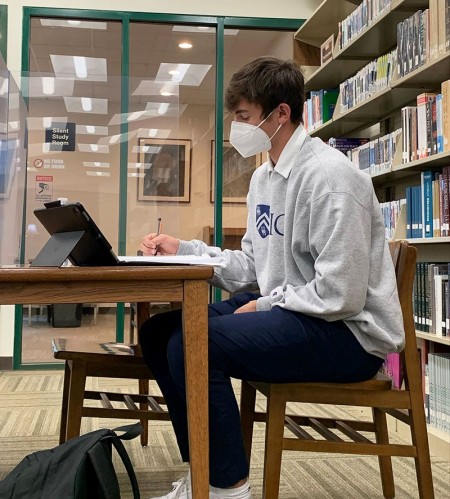 Garrett does his homework in the library, embodying what it means to be a student-athlete.

Garrett had high aspirations both in academics and athletics. During Garrett’s first two years at Strake Jesuit, he earned highest academic honors, an achievement received for perfect academic performance with a maximum rigor course load. He accomplished this consistently while also being a dual-sport athlete, playing both baseball and basketball.

Striking a balance between the energy spent in the classroom, on the court and on the field was important to Garrett, who said that it all came down to good time management and great teachers. He remarked, “Over the past two years, my favorite thing about the school has been the teachers. They will do anything to help you succeed, but they will never coddle you.”

Garrett referenced a specific time early in his sophomore year where he had his freshman basketball coach, Mr. Ford, as an English teacher. Garrett thought the class would come easy because of his ability as a student and his strong relationship as a teacher. However, he was in for a rude awakening when he had a low participation grade after the first few weeks. Garrett stated, “This was very humbling for me. I made sure to give maximum effort for the rest of the year because I didn’t want to let him down.” 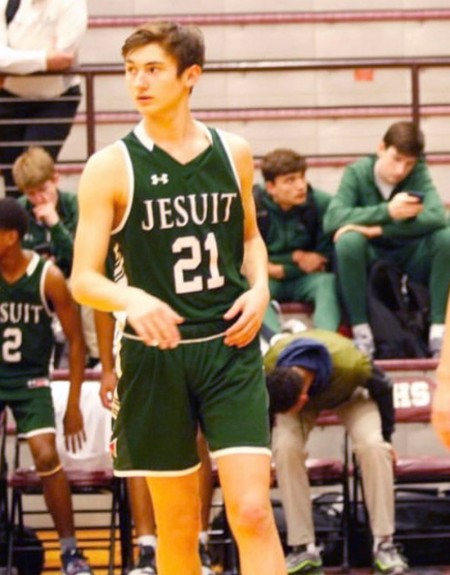 Garrett prepares for tip-off of a JV basketball game.

As a standout athlete, Garrett also made sure to give maximum effort in both of the sports he played. During his time as a basketball player, he started many games for the junior varsity team which finished 23-3 ,13-1 in district play. He was seen as a team leader and was on track to making varsity as a junior.

His outstanding performance as a baseball player forged a different path for him. After just a few Strake Jesuit baseball games his sophomore year, the season was cancelled due to the COVID-19 pandemic. He said this was very disappointing, but he made the most out of the situation. Garrett recalls training for hours a day to prepare for his spring season and this hard work paid off.

Garrett started to get noticed by college scouts during the spring while playing baseball for his travel team, Houston Kyle Chapman Baseball. He recalls a specific moment where his recruitment really took off. He was in the middle of a streak where he pitched more than 25 scoreless innings, and he was facing a team with NCAA Division I commits top to bottom. He said, “Their ninth batter was a University of Texas commit! That’s how good they were, to put it in perspective.” He ended up beating this team in the championship and, at that moment, he felt like playing college baseball would be a reality.

Soon after, the scholarship offers started flooding in. Garrett received offers from many schools, but eventually narrowed down his recruitment to Missouri, Rice and Yale. He ultimately made the decision to commit to Rice. After living in Missouri until high school, Garrett said that he had really come to appreciate Houston and did not want to leave. Additionally, he would be able to play in front of his grandparents, which was something that might have only been possible at Rice due to the current climate with COVID-19.

Family played another role in his choice since his dad went to the Rice Jones Graduate School of Business. Lastly, Garrett feels that becoming an Owl will provide him with a great mixture of elite sports and academics. Rice University ranked 16th in the latest US News college ranking for national universities. Garrett also spoke highly of Rice’s head coach, Michael Bragga. Garrett remarked, “After I got on the phone with him, I bought in. I was set on going to Rice.”

These factors ultimately led to Rice landing a hometown hero who has a bright future both in the classroom and on the baseball field. Garrett looks forward to making positive contributions in his final two seasons at Strake Jesuit before taking the next leap in sports and studies.