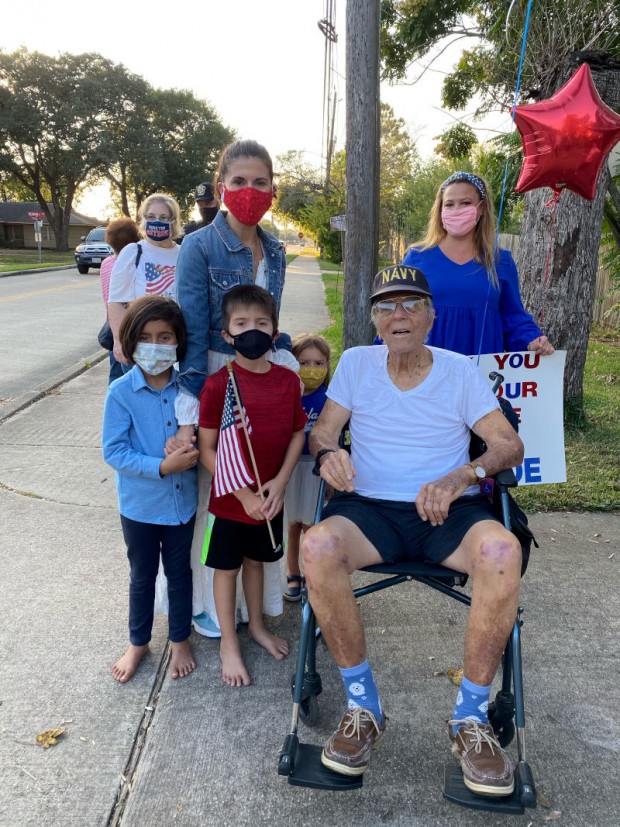 These neighbors are lucky to have each other. Sarah and her family - along with lots of neighbors - are big fans of Joe. Pictured, surrounding Joe, are (from left, bottom) Seraphina Aramburo, Fernando Aramburo, Cali Mendiburu; (top, from left) Sarah Aramburo and Jade Mendiburu.

It all started last Sunday with a post on social media by Bellaire resident Sarah Walters Aramburo, expressing that she wanted to honor neighbor Joe Wardell, 96, for Veteran’s Day.

Sarah explained that her family has a special connection with him and that it’s been a particularly tough time for Joe, as his wife had passed away a few months ago. Part of her post read: “[Joe] has served this beautiful country of ours. His many proud stories of his family, Bellaire, friends & his time in service are truly inspiring.”

On Veteran’s Day in the past, to honor Joe – and all veterans – she’s placed a flag on her fence so Joe can view it from his lawn chair. “Last year when I did this he was truly moved & walked over to share stories with my family. He shared that at one time Bellaire was full of American flags during this time but that tradition has fallen off a bit. I want to show him that we haven’t forgotten about him and his fellow servicemen!” she shared in her post. 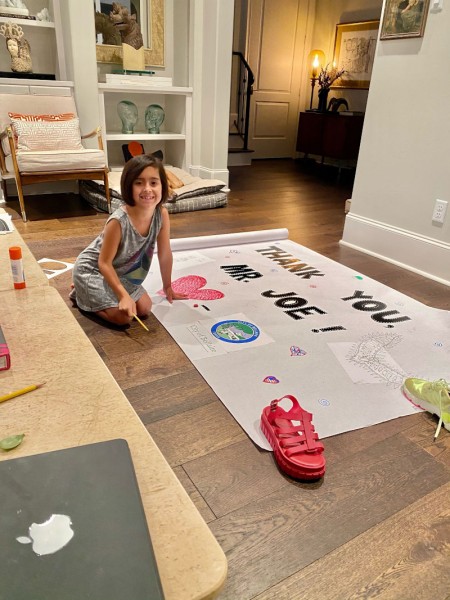 Seraphina Aramburo decorates a sign to hang on her family's fence to honor her nice neighbor, Mr. Joe.

She said that she and her kids planned to make a large thank-you banner and encouraged neighbors to stop by and sign the banner or drop off cards, flowers, balloons, flags or any tokens of appreciation for Joe’s service.

A Navy veteran who served in both WWII and the Korean War, Joe still lives in the Pin Oak Lane house that he and wife Ava moved into when they married in 1959. They raised their children Cheryl Patrick, Nanci Allen and Joe Wardell Jr., in this home and, today, their family includes seven grandchildren and 13 great-grandchildren.

When Sarah and her family - husband, Fernando, and children, Seraphina and Fernando Jr. - moved into their house in 2018, they met Joe, whose back carport faces their side fence. They quickly discovered that, in addition to being a talented gardener, Joe is a WWII and Korean War veteran.

So, on Veteran’s Day three years ago, Sarah hung their American flag on the fence for Joe to see. Last year, she and her children put up two flags and made a poster.

“This year has been a hard year for Joe,” Sarah said, “so we really wanted to do something extra special. On a whim, I posted it on social media and invited the community to get involved.” 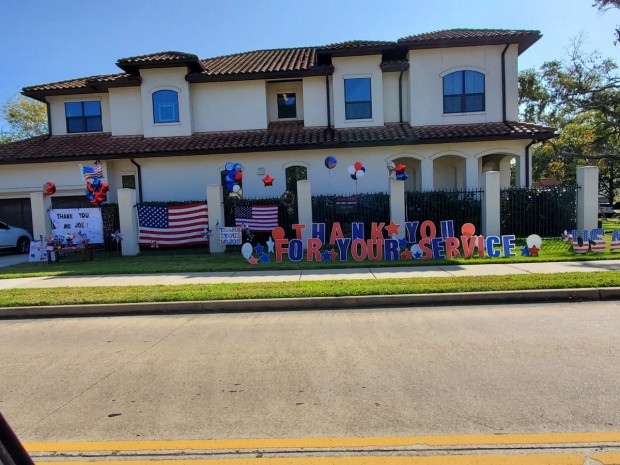 Joe Wardell felt the love from neighbors on Veteran's Day.

Sarah was blown away by the response. The neighborhood created a wonderful red, white and blue fence full of thanks and lots of love.

The big reveal was planned for 4 p.m. on Wednesday when Joe’s caregiver would bring him outside. Neighbors of all ages gathered excitedly. Joe’s family added to the surprise by waiting in his garage. An assortment of news crews arrived to cover Joe’s tribute.

When the man of the hour made his appearance and saw all the red, white and blue, flag waving and smiling faces, he was surprised and shed a few tears of joy as did many neighbors who attended the special celebration.

Joe’s son, Joe Wardell Jr., shared, “Sarah was so very kind in putting this together for Dad. Last year on Veteran’s Day, she and her kids made a poster and brought over to my father thanking him for his service. He still has that poster next to the fireplace; he still very much treasures it.” 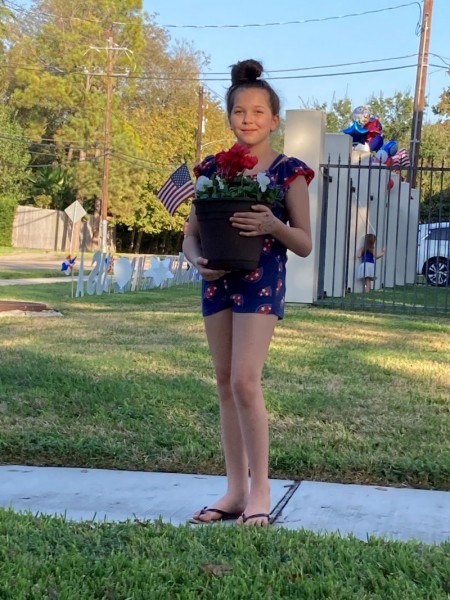 Horn Elementary student Ayla Bozkurt and her mom Carrie brought red, white and blue flowers in addition to a yard sign to add to the patriotic decorations.

He expressed how much his family appreciates neighbors’ efforts to make Veteran’s Day special for his father. “Following the loss of my mother in July and with his inability to go places due to the Covid situation, he was so touched by this expression of thanks and love by his neighbors. He can't really reach out to them except wave from his chair but seeing the people of all ages waving flags and holding signs thanking him is something he will never forget.”

Another veteran present at the tribute was Bellaire police officer James Baylis who helped with traffic control. He said he was honored to be part of a tribute to a WWII veteran. Officer Baylis has served in the Air Force and Navy and is currently in the Air National Guard. 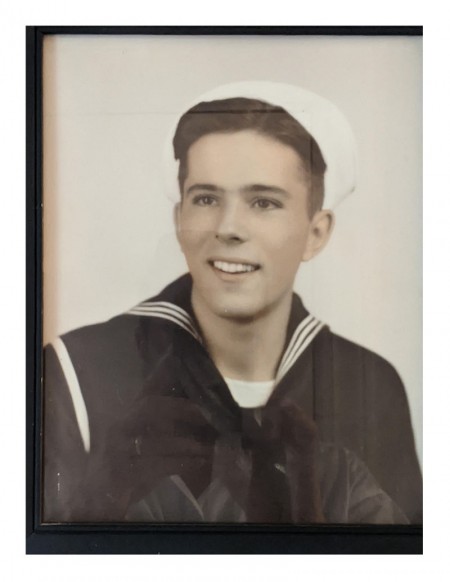 Neighbor Dana Turner shared, “When I saw the sweet note from his neighbors, I wanted to join in to celebrate his service to our country and our community in Bellaire. Time passes but memories remain. He's made a lot of memories and I'm so happy he is our neighbor. I hope he likes the candy I'm leaving but I know he'll love the community hug!”

After crossing the street to enjoy the fence tributes and decorations up close, Joe went back to his carport and soon started singing along to patriotic tunes someone had turned on. He was smiling and singing along at the top of his lungs. It was indeed a good Veteran’s Day.

Until you go meet them, you never know what sorts of heroes might be living right next door. 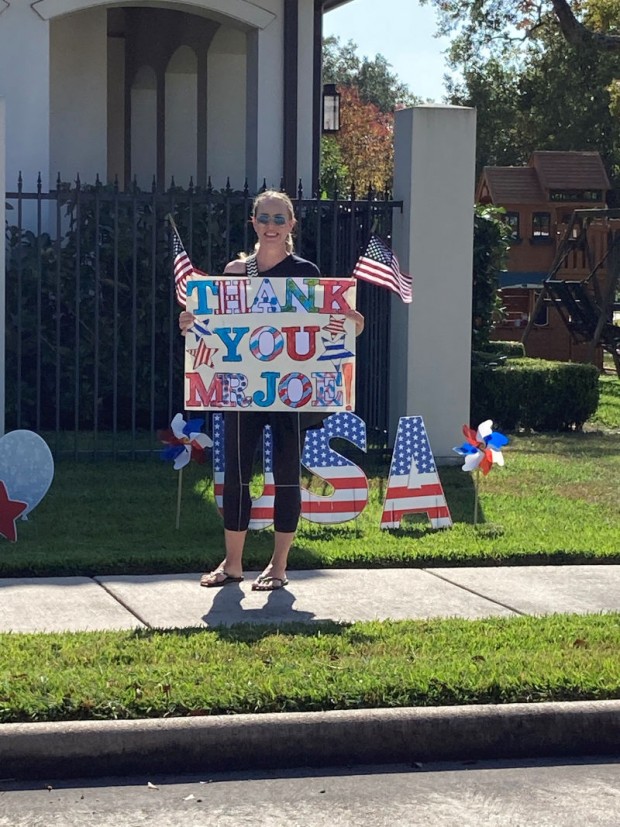 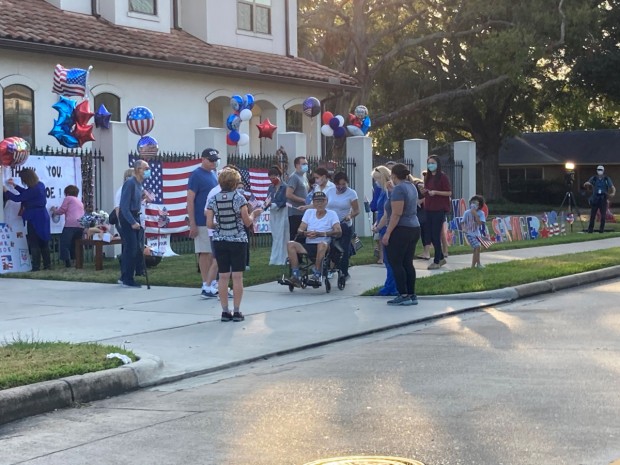 Joe Wardell viewing all of the kind gestures. 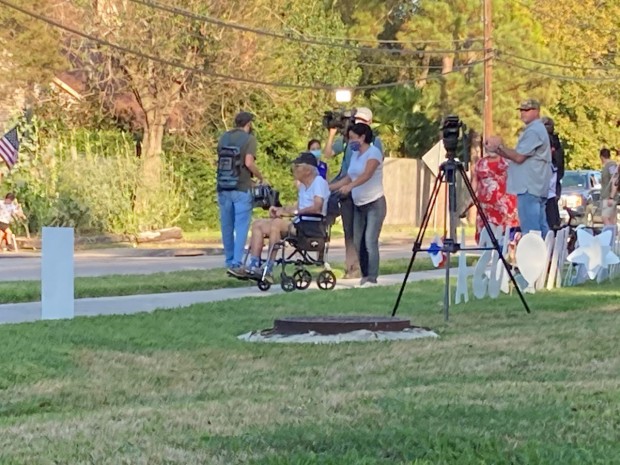 Joe Wardell Sr. is ready for his close up. Here, he's being interviewed by some local news channels. See clips here and here. 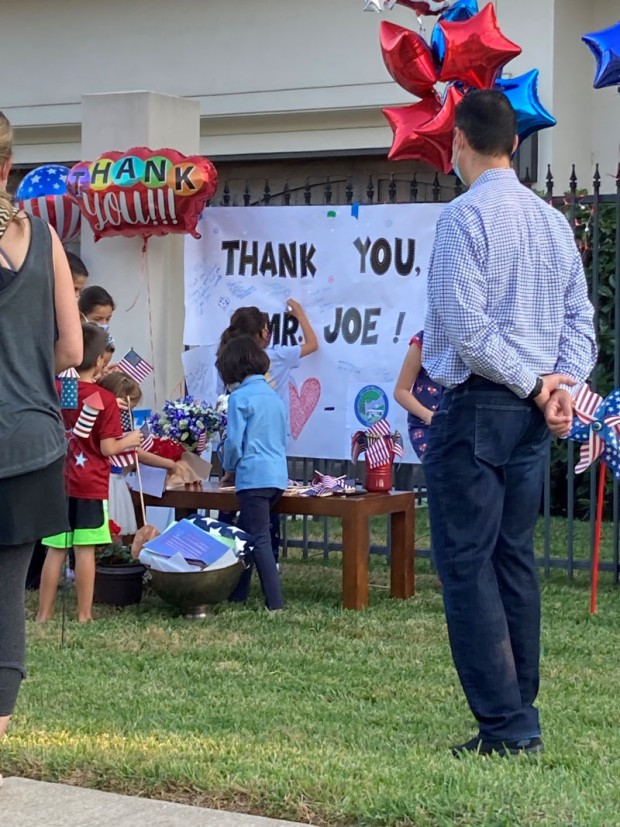 In addition to signs and balloons, people also dropped off cards, flowers and other tokens of thanks on this special table and could also sign Mr. Joe's banner.