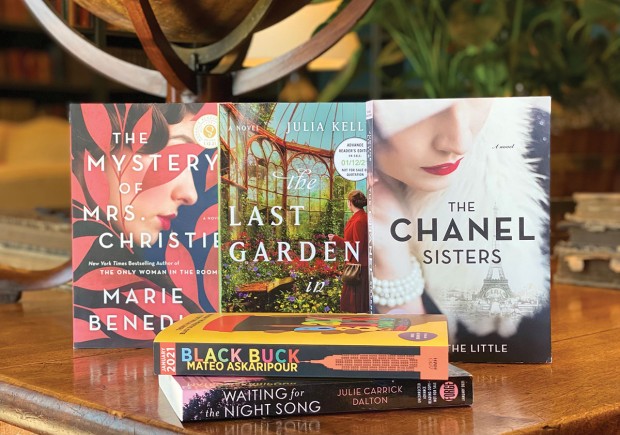 WHAT TO READ This month's picks include three historical fiction titles, a satire about the American workplace, and a story about long-held secrets.

Black Buck by Mateo Askaripour – Darren, 22, was the valedictorian at Bronx Science and has been content to live with his mother and work as a barista at a Starbucks ever since. One day he impresses the CEO of Sumwum, a start-up officing in the same building as his Starbucks, and suddenly finds himself thrown into the crazy, frenetic world of Sumwum as its only black employee. Reinventing himself as “Buck” after a brutal week of training and indoctrination, Darren becomes a cold-hearted salesman willing to make sales for the company at any cost, including putting up with the blatant racism he experiences at work. When his home life takes a tragic turn, Darren realizes that he must jettison Buck and find his way back to the Darren he once was. Askaripour targets startup culture, workplace hazing, systemic racism and more in this unique, quick-witted, often hilarious debut novel that is unlike anything that I have read before.

The Chanel Sisters by Judithe Little – This gorgeously written book by Houstonian Judithe Little chronicles the lives of Antoinette and Gabrielle “Coco” Chanel from their early years at the convent orphanage in Aubazine, France. Their time at the orphanage left a lasting impression on both girls and forged a determination in Coco to create a better life for herself and to seek entrée into the upper-crust society who refused to accept her. From the days of their hat shop on Rue Cambon in Paris to the years after the war, Little tells the women’s stories through the eyes of Antoinette, detailing their friendships, romances and success in the fashion business. In her author’s note, Little includes engaging tidbits about Coco Chanel’s inspiration for her CC symbol, which recreated the interlocking loops in Aubazine’s stained glass, and for her jewelry, which copied the patterns found on the orphanage’s stone floors. Readers will be captivated by this stunning tale.

The Last Garden in England by Julia Kelly – Centered around the fictional Highbury House gardens, Julia Kelly takes the reader on a fascinating journey through these elaborate gardens across the span of over a century. Set in a triple timeline format, 1907, 1944 and 2021, The Last Garden in England follows five women whose lives are interwoven with the house and particularly the gardens. Kelly brings the gardens to life, and I often felt that I was right there with the characters among the plants and flowers due to her creative and beautiful descriptions. She uses just the right amount of detail, and it is easily apparent how much research Kelly conducted. I thoroughly enjoyed this one.

The Mystery of Mrs. Christie by Marie Benedict – Agatha Christie disappeared in December 1926 and returned 11 days later claiming amnesia and providing no information on where she had been. Her abandoned car was found with her fur coat still in the car, even though it was winter, and her husband and daughter had no idea where she was. The mystery surrounding these 11 days exists still today, and Marie Benedict puts her own spin, using a creative format, on where Agatha Christie went and why in this intriguing and clever take on what might have happened.

Waiting for the Night Song by Julie Carrick Dalton – Dalton’s poignant and beautiful debut novel captivated me from the start. Alternating between the past and the present, Waiting for the Night Song follows Cadie Kessler, an entomologist and forestry researcher focused on studying the pine bark beetle in New Hampshire. Her goal is to prove that the beetle is present in the state and destroying pines similar to the devastation it wrought in California and Colorado. As the book opens, Cadie is drawn home to help a childhood friend confront the long-held secret that the duo covered up several decades ago. Dalton creates a magnificent sense of place, bringing the New Hampshire forest to life while tackling tough and highly relevant issues such as the pine bark beetle, climate change and racism. Waiting for the Night Song is a fabulous addition to the growing genre of climate-focused fiction.