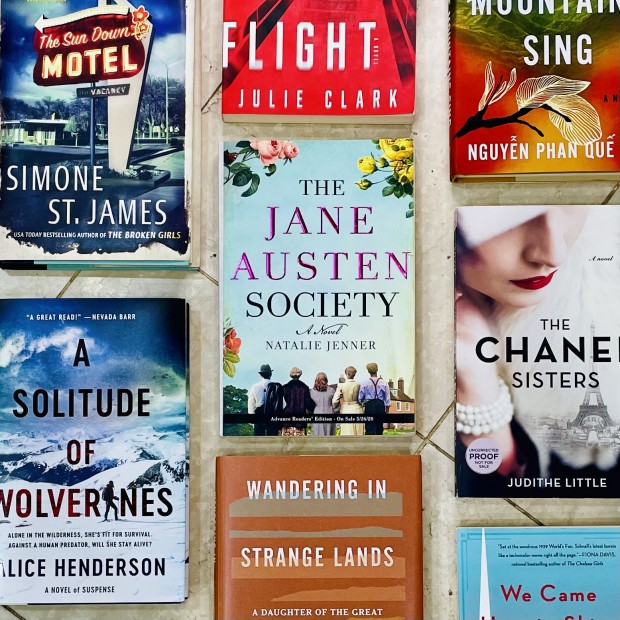 2020 has been a year like no other in recent memory (thank goodness 2020 is the aberration and almost over). Everyone has been impacted, and in the publishing industry, authors with new books releasing have been hit hard so I want to give a shout out to every author who published a book during this crazy year, especially during the pandemic months. I have read so many wonderful books this year and have been highlighting them in as many ways as I can.

Two recent Page Turners columns consisted of my favorite books published in 2020 by genre. This week, I am writing about my top eleven of the year – those that resonated the most with me and have stayed with me long after I finished them. After much deliberation, I managed to narrow down my list to these titles (they are listed alphabetically because I love them all equally):

The Chanel Sisters by Judithe Little – This gorgeously-written book by Houstonian Judithe Little chronicles the lives of Antoinette and Gabrielle “Coco” Chanel from their early years at the convent orphanage in Aubazine, France. Their time at the orphanage left a lasting impression on both girls and forged a determination in Coco to create a better life for herself and to seek entrée into the upper-crust society who refused to accept her. From the days of their hat shop on Rue Cambon in Paris to the years after the war, Little tells the women’s stories through the eyes of Antoinette detailing their friendships, romances, and success in the fashion business. In her Author’s Note, Little includes engaging tidbits about Coco Chanel’s inspiration for her CC symbol which recreated the interlocking loops in Aubazine’s stained glass and for her jewelry which copied the patterns found on the orphanage’s stone floors. Readers will be captivated by this stunning tale. Our literary salon, Conversations from a Page, is hosting Judithe for two events in January, and you can check them out here.

Dear Edward by Ann Napolitano - Dear Edward is one of the most poignant tales that I have read in a long time. It tells the story of Edward, a 12-year-old boy who is the sole survivor of a plane crash, and his attempt to carry on in the aftermath of this horrific event. The story alternates between the lives of the passengers on the doomed plane and Edward’s life following the crash. I was a little nervous to pick this one up because I am not a fan of overly sad or dark tales and was worried that Dear Edward fit that description. However, while the subject matter is obviously sad, the book itself is ultimately uplifting, life-affirming and just plain fantastic. I cannot say enough good things about this wonderful and unique tale.

The Jane Austen Society by Natalie Jenner – The Jane Austen Society is set in Chawton, England following the Second World War – the town where Jane Austen spent her last years. When Austen’s legacy is threatened, an eclectic group of townspeople band together to save her home and her heritage. Struggling with personal tragedies and loss, these individuals unite around their love of Jane Austen and her stories and find themselves aiding each other as much as they help save Austen’s legacy. The Jane Austen Society is a tribute to Austen and is chock full of fascinating tidbits about the author and her tales, but it also highlights the importance of community and relationships demonstrating that both can be found in the most unlikely places. Natalie Jenner’s fabulous tale is historical fiction at its finest – she transports the reader to another time and place filled with unique and authentic characters while focusing on the importance of literature and its ability to resonate for decades to come.

The Last Flight by Julie Clark - The Last Flight is a high-octane thriller that begins with a bang and never slows down. Two women eager to flee their own lives agree to swap tickets for their flights at the last minute: Claire gives Eva her ticket to Puerto Rico and takes Eva’s ticket to Oakland. When the flight to Puerto Rico crashes into the ocean, Claire realizes she must assume Eva’s identity to survive, but quickly learns that Eva was not who she claimed to be. Toggling back and forth between the two women, the story rapidly unfolds revealing jaw-dropping twists and turns that you will not see coming. The Last Flight is indisputably the best thriller that I have read in ages – Clark skillfully blends great characters, clean writing, and a superb mystery, and I loved racing through it.

Miss Graham’s Cold War Cookbook by Celia Rees - Set in Germany following World War 2, this historical fiction tale follows Brit Edith Graham as she joins the Control Commission, an entity that hires civilians to rebuild war-torn Germany. Edith is tasked with setting up schools in ravaged German towns. Before she leaves London, she is recruited by the OSS to spy while in Germany and send back intelligence through recipes she gathers as she travels. However, when Edith arrives, she realizes that many of the people in occupied Germany are not what they seem. Rees brings the post-war country to life – the devastation to the cities and towns, the rush to find war criminals (sometimes to prosecute, sometimes to send to the U.S. or Britain to use their knowledge), the lack of food and shelter, the underground Nazi movement that hopes to re-emerge, and the slow uncovering of the vicious Nazi experiments on humans. Masterfully detailed, this atmospheric book transported me to the streets of post-war Germany and entertained me with an intriguing cast of characters.

The Mountains Sing by Nguyen Phan Que Mai - Beautifully and lyrically written, Nguyen Phan Que Mai’s English debut follows multiple generations of the Tran family against the back drop of Vietnam’s heartrending 20th century history. From the rise of the Communist government in North Vietnam to the years of conflict during the war itself, The Mountains Sing highlights the impact and cost of the events that led up to the Vietnam War on the Vietnamese people from their perspective while interweaving in the language and traditions of their culture. The Mountains Sing is not only a glimpse into Vietnam and its people but is also a cautionary tale about the impact of decades-long conflict on the people actually living through it. While I have finished the Tran’s story (and needed lots of tissues), their experiences will stay with me for a very long time.

A Solitude of Wolverines by Alice Henderson – The first installment in a new series, this fast-paced mystery stars wildlife biologist Alex Carter who is hired by The Land Trust for Wildlife Conservation (LTWC) to study the wolverine population on a preserve Montana. For decades, a ski resort operated on the land until it was abandoned in the 1990s, and the owner later donated the property to the LTWC. Wolverines occupied the land prior to the building of the resort, and the LTWC seeks to determine if members of this threatened species are still living on the preserve. After agreeing to take the job, Alex finds herself housed at the derelict Snowline Resort lodge, a clever setting that significantly ramps up the creepiness factor of the story. While reviewing footage from the cameras used to track the wolverines, Carter comes across the images of a severely injured man; but when a search party fails to locate the man and Alex finds more indications that people are trespassing on the preserve’s land, she realizes that she has stumbled into the crosshairs of an illegal operation. Henderson’s well-crafted tale combines an intriguing mystery with facts about the elusive wolverine population and the threats to its habitat. A Solitude of Wolverines will appeal to anyone who likes an intelligent and timely read.

The Sun Down Motel by Simone St. James - The Sun Down Motel is a creepy, rundown motel serving as a pit stop for travelers on their way through Fell, New York that also provides a place for locals to hide out. But as Viv and Carly, two women 35 years apart, learn there is someone or something else living at the Sun Down, and they both are determined to find out who or what is haunting the motel and why. St. James’ pacing is perfect, and the book is awesomely creepy but not overly scary. The Sun Down Motel is one of the best books I have read in a while - the characters are so well developed, and I rooted for both Viv and Carly as they sought to understand what was happening at The Sun Down Motel.

Wandering in Strange Lands: A Daughter of the Great Migration Reclaims Her Roots by Morgan Jerkins – During the Great Migration, over 6 million black people left their rural Southern homes seeking better economic prospects in the North, West and Midwest. Taking a personal approach to the effects of the Great Migration, Jerkins recreates the paths her ancestors took out of Georgia and South Carolina and studies the loss of familial knowledge and the impact on personal identity. Her premise provides a fresh and enthralling deep dive into one woman’s attempt to understand her roots and her family’s legacy. Thought-provoking and incisive, Wandering in Strange Lands is a timely tale. I listened to the audiobook, which Jerkins narrates.

We Came Here to Shine by Susie Orman Schnall - Against the backdrop of the 1939 New York World’s Fair, two women forge a friendship and summon up the courage to pursue their dreams and overcome adversity. Vivi Holden wants to be a famous actress and first must perform well as the headliner for the Aquacade, the synchronized swimming extravaganza at the World’s Fair. Max aspires to be a journalist and must prove her worth covering the fair for its pop-up publication. Schnall deftly weaves in details from the actual World’s Fair and includes a beautiful (and helpful) map of the fair at the front. Historical fiction steeped in the spectacle and hoopla of the New York World’s Fair, We Came Here to Shine is a story about courage, friendship and having the strength and determination to achieve one’s goals. Once I started this one, I could not put it down, and I reveled in Schnall’s vivid recreations of the fair.

When We Were Young & Brave by Hazel Gaynor – In her latest work of historical fiction, Gaynor brings to life the story of a group of teachers and students at a British-operated missionary school in Chefoo, China. Inspired by a true story, When We Were Young & Brave chronicles the trials and tribulations of this group that was held captive for over three years by the occupying Japanese army during World War 2. The Chefoo School educated the children of missionaries and diplomats, and in peaceful times, the teachers were tasked with not only educating their charges but also serving as stand-in parents to these children whose parents frequently left them there for months and occasionally years at a time. When Japan declared war on Britain and the United States, the Japanese forces (who had already invaded China) took control of the Chefoo School and its inhabitants and eventually moved the group to a Japanese internment camp, requiring the teachers to help their students weather unimaginable adversity. Gaynor vividly portrays the horrors of war, life in captivity, the resilience and optimism of humans, and the importance of relationships and friendship especially in trying times. Grab your tissues before you start this one!

I would love to hear your favorites from 2020.  Please drop them in the comments below. I wish everyone a wonderful holiday season and happy reading!