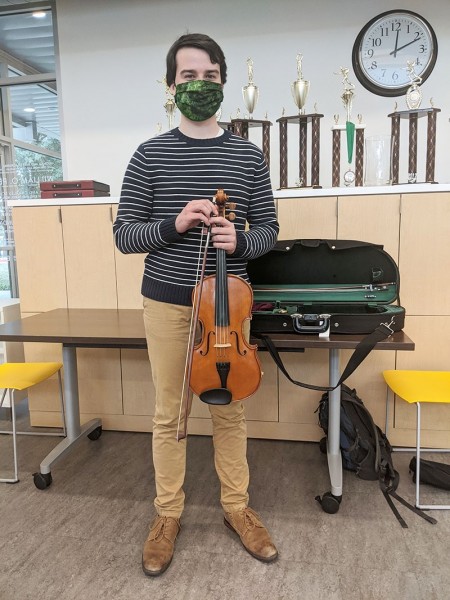 Many things, including concerts, have been put on hold amid the pandemic. However, one passionate musician and music teacher at The Post Oak School, Maxwell Lowery, hosted a mini-concert for the students and staff to bring back some memories of pre-pandemic life and to help everyone get in the holiday spirit.

Mr. Lowery plays the viola and is trained as a classical musician. He moved to Houston amid the pandemic and joined the Post Oak family to share his love of music with fellow musicians and music enthusiasts.

Like all of us, Mr. Lowery has missed attending concerts and playing music. This gave him the wonderful idea to host a mini-concert, just half an hour long, for the people of Post Oak. For his concert setlist, he chose a variety of different pieces ranging from 19th century classical to 21st century neo-classical. He even shared with us a piece he had written himself back in February of this year.

The concert was Dec. 14 at 11:45 a.m. in the Post Oak school commons. I arrived at school looking forward to an enjoyable thirty minutes of music. In fact, I barely got through my morning classes. I was so excited to finally attend a concert again. So, at precisely 11:45 a.m., the concert began.

Mr. Lowery started off with his own piece he composed earlier this year, and then moved on to something from the early 2000s that had a lot of energy and fast plucking. Yes, indeed, plucking. Usually, one plays a viola with a bow, but for this song, Mr. Lowery had to pluck the strings of his viola.

After this upbeat and engaging piece, he took us all back into the 19th century with a melancholy, slow piece from 1841. Luckily for the strings on Mr. Lowery’s viola, this piece did require the use of the viola bow, which meant the instrument could stay in tune easier.

After another soft ballad-like piece from the mid-20th century, Mr. Lowery ended the show with a minimalist piece that had an increasing tempo throughout. I found this piece to be particularly interesting, because it employed the same forty-three notes played in the same sequence each time, except each time the sequence was played, it was at a slightly quicker pace.

After the concert had concluded, many students and teachers went up to congratulate Mr. Lowery on a successful and entertaining show that was much-needed during the pandemic. Hopefully, this has set a precedent for future mini-concerts at Post Oak and has inspired students and staff alike to express their talents in the future.