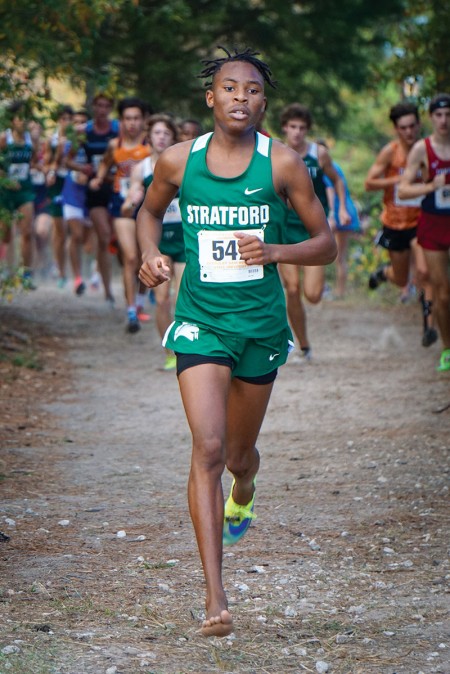 BAREFOOT BLAZE Despite having his right shoe clipped off shortly into the race, Stratford Spartans junior Emanuel Galdino still raced to victory at the UIL 6A Region III cross-country championship in a winning time of 15:07 over the 5k course.

If going against the region’s top Class 6A runners weren’t challenging enough, Stratford Spartans junior Emanuel Galdino faced an unimaginable hurdle en route to winning the UIL 6A Region III cross-country championship. He ran most of the race with only one shoe.

The other shoe was clipped off by another runner about 400 yards into the 3.1-mile race.

“He stepped on the back of my right foot, and it just came off. I really had no option but to keep going,” said Galdino. “Before we started, Coach said that when you’re hurting, you’re hurting for other people, so I kept that in mind.”

Stratford coach Shawn Siemers first spotted his shoeless runner at the 1-mile mark of the race. “Emanuel’s pretty tough, and his stride is really good. I asked him if he’s going to be all right. He gave me a thumbs-up, so I said let’s go finish the race.”

But finishing the race was certainly easier said than done, especially considering the terrain runners must navigate through in cross-country. “It was not a soft course,” said Siemers. “There was a gravel road you had to run across, and there were rocks all over. I’m sure it was not a pleasant experience for Emanuel.”

Galdino’s Stratford teammates couldn’t believe what they were seeing. “I thought it was crazy,” said Spartans sophomore Quinn Otermat. “There were rocks all over the course. It just seemed super painful, and I was worried he was going to drop out. I couldn’t imagine myself in that position.”

Rather than drop out, Galdino ultimately ran the best and most courageous race of his high school career while winning the 5k race in a scorching time of 15 minutes and seven seconds.

“It was incredibly special. I never thought I would win the race, much less do so with one shoe. By the end of the race, I had a huge blister under my toe that we had to pop out. It was pretty nasty,” said Galdino.

“It just shows his toughness and his dedication to win,” said  Siemers. “It is an incredible feat.”

It wasn’t an official championship game, but there was no shortage of championship celebrations for the Kinkaid Falcons football team, which capped off an undefeated season with a 27-14 victory over rival Episcopal Knights.

With the Southwest Preparatory Conference opting not to hold its fall championships in the wake of the coronavirus pandemic, the season finale between Episcopal and Kinkaid became an unofficial title game for two teams that had combined for 10 of the last 11 SPC football championships.

“It definitely gave us that championship feel,” said Falcons head coach Nathan Larned. “That was a big reason Episcopal coach Steve Leisz and I decided to move the matchup back to the last week of the season. It was definitely a special way to end the season. It’s a memorable way for our seniors to go out and gives our underclassmen a great win to build on for next season.”

As for the game itself, the Falcons were again led by another sensational effort from junior Dillon Bell, who, along with rushing for 187 yards and three touchdowns, also threw a 22-yard touchdown pass to Charlie Kugle in the victory. “Dillon is just a special player who took over the game. He’s an amazing kid who works hard and sets an example for the rest of the team,” said Larned. “He could also be our best defensive player, but he kind of does it all on offense as a running back, receiver and sometimes even at quarterback.”

With the win, Kinkaid closed out the season with a perfect 7-0 record, having pulled out several improbable victories along the way. “We had some incredible comebacks for sure,” said Larned.  “We were down 20-0 in our season opener against Little Cypress-Mauriceville and also rallied from a 27-0 deficit to defeat Legacy School of Sports Sciences. We scored with three seconds left for that victory.

“Our first few games were just insane, but our guys just met every challenge. We didn’t even know if we’d have a season at all due to the pandemic, and I couldn’t be any prouder of how our guys handled adversity both on and off the field.”

10:30 am to 1:00 pm
Location:
The Brookwood Gift & Garden Center
END_OF_DOCUMENT_TOKEN_TO_BE_REPLACED