Cobra Kai: Bingeworthy Show To Watch With Your Teens 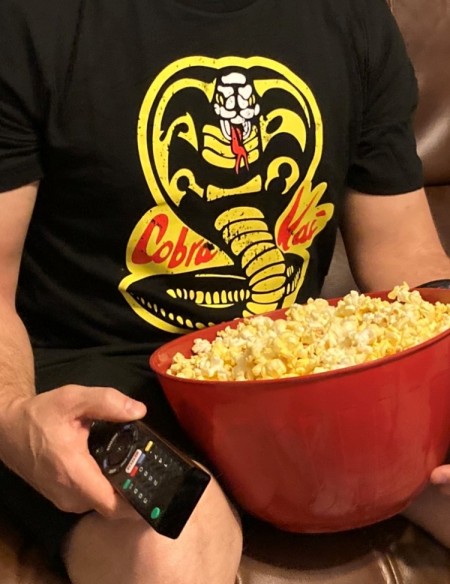 What would happen if you took a karate uniform, a tournament trophy, some car wax, a Walkman, a bonsai tree, a pinch of teenage angst, turned them into a mixed tape, inserted it into a 1983 Pontiac Firebird cassette player time machine, programmed it from 1984 to 2021 and hit play? Meet Netflix’s Cobra Kai.

Last fall Bellaire professional organizer Amy Cunningham and her husband, Scott, got a “Whoopi” of a suggestion for a new show to watch.

“Whoopi Goldberg is a huge fan of Cobra Kai,” Amy shared. “She was raving about it on The View so much that I wanted to check it out.”

Scott and Amy were hooked from the first episode.

“We love Cobra Kai! I guess one of the best parts of the show is that it doesn’t take itself too seriously,” Scott said. “It’s the perfect mix of 80’s nostalgia and current day parenting challenges. Def Leppard, jean jackets, and cool cars…sign me up.”

The Cunninghams also love that the characters are complex. There’s no clear good guy or bad guy — everyone has some redeeming qualities. In the original Karate Kid, the teenage character Johnny Lawrence was the main bully of the movie. In middle age, he’s more just misunderstood. The Cunninghams love rooting for Johnny.

Amy shared her six degrees of separation connection to the show that the part of Daniel LaRusso’s daughter, Samantha, is played by actress Mary Mouser who is from her same small hometown in Arkansas.

“I don’t know her personally but in a small town everyone sort of knows everyone and everything,” Amy said. “I had no idea Mary was on the show until we started watching it. So that was a fun surprise.”

“Scott and I have loved watching all three seasons of the show. The comic relief has been so welcome.” Amy didn’t want to spoil anything, but say to be ready to laugh during some hilarious scenes regarding Facebook in season 3.

Kellie Green and her husband, Jerral, love watching the show with their high school son Hayden.

“Hayden suggested that we make Cobra Kai a family binge. Of course, Jerral and I were all in and thrilled that he actually wanted to do something with us,” said Kellie. “Watching an episode of the show each night has become part of our nightly routine".

Like so many other families with teenagers, it’s often challenging to find something for the whole family.

Kellie shared, “I’m thankful that Cobra Kai has helped lure Hayden out of his room allowing us to spend a little quality more time with the three of us. Watching the show together has definitely led to some good family bonding and given us a mutual something to talk and laugh about it”.

Proud Class of 1988 graduate and film enthusiast Jeff Fuller shared his thoughts on the spinoff of 80’s classic, Karate Kid.

“I love Cobra Kai. Its nostalgia brings back so many moments of reliving high school and enjoying the music of that time,” he said. “It’s also entertaining to recognize the themes of both the movie and the show from an adult parent perspective.

Black Belt Mike Nebgen is known as Master Mike at his Martial Arts studio in Meyerland.

Mike said, “The karate on Cobra Kai isn’t exactly perfect but I do find the show entertaining.”

Over the winter break, Bellaire High School senior Xander Fell’s friends told him to watch Cobra Kai. Xander is a lacrosse guy, so he doesn’t know much about Karate or the Karate Kid movie, but he ended up really liking the show. He watched all three seasons straight through in about three days. It was a great show to binge during the holidays. He looks forward to watching season four.

Editor's note: This show has TV-14 age rating due to violence and strong language. Preproduction for Season 4 of Cobra Kai has begun.