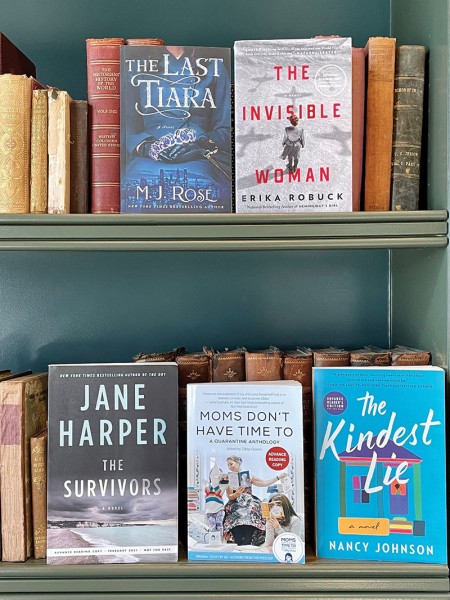 WHAT TO READ This month's picks include a compilation of essays, two historical-fiction titles, a mystery set in Australia, and a timely tale set during the early days of the Obama administration.

The Invisible Woman by Erika Robuck – Robuck brings real-life American heroine Virginia Hall to life, highlighting her immense bravery as an Allied spy in German-occupied France during World War II. She vividly depicts Hall’s extraordinary heroism amid the horror of the Nazi atrocities while also shining a light on the thousands of regular people who bravely joined the Resistance (and put their lives on the line) to ensure that their country would not fall to the Nazis. I read this one in less than 24 hours and absolutely loved it.

The Kindest Lie by Nancy Johnson – Set at the dawning of the Obama administration, The Kindest Lie follows Ruth Tuttle, a black engineer whose husband is eager to start a family. Haunted by her decision to give up a baby she gave birth to when she was young, Ruth returns home to Indiana to face her past so that she can focus on her future. Disheartened by the poverty and racism she encounters upon her return home, she searches for the son she gave up while also digging into her family’s past, only to unearth secrets long buried. As racial and economic tensions build and eventually overflow, Johnson vividly demonstrates the brutal and long-lasting consequences of an ongoing racial divide that continues to exist.

The Last Tiara by M.J. Rose – M.J. Rose’s latest book focuses on a tiara that was once owned by the Romanov family (and is actually still missing today) and her reimagining of what could have happened to this priceless artifact. When her mother Sophia dies in 1948 Manhattan, Isobelle stumbles across a tiara, stripped of all of its jewels, hidden in their shared apartment. As she researches the mysterious tiara, she learns more about her mother’s past, something Sophia would never speak about when she was alive. In 1915 Russia, Sofiya Petrovitch and her close friend Grand Duchess Olga Nikolaevna tend to injured troops on the grounds of the Winter Palace in St. Petersburg where Sofiya/Sophia falls in love and sets in motion events that eventually cause her to flee to the United States. Told in alternating perspectives and time periods, the tales of the two young women slowly unfold as the mystery of the tiara is ultimately resolved.

Moms Don’t Have Time To: A Quarantine Anthology edited by Zibby Owens – Covid-19 altered our lives in 2020 in ways that few could have foreseen – we have a new vocabulary specific to our current existence, our interactions with each other are modified, and our day-to-day routines are significantly different than prior to the pandemic. Zibby Owens has used this time productively, promoting authors and their books on her podcast Moms Don’t Have Time to Read Books and on IGTV, through an online magazine she created called We Found Time, which addressed growing demands on our time (something the pandemic exacerbated). This anthology compiles the essays from We Found Time, written by a variety of authors and organized thematically into five categories of things moms have to find time for: eat, read, work out, breathe, and sex. Some of my favorites are “Wait, Did I Kill My Book Club?” by Rachel Levy Lesser, “What the Brady Bunch Taught Me about Family Dinners” by Alison Cayne, and “When I Got Coronavirus, My Husband Became My Wife” by Karma Brown. All proceeds from the sales of this book go to the Susan Felice Owens Program for COVID-19 Vaccine Research at Mount Sinai Health System (Zibby lost her mother-in-law, Susan Felice Owens, and grandmother-in-law to Covid-19 this summer).

The Survivors by Jane Harper – Jane Harper returns with another stunning and well-paced Australian mystery, this time choosing southernmost Tasmania as her setting. After a long absence, protagonist Kieran Elliott returns home to Evelyn Bay for a visit to help care for his ailing father. When he was 12, an accident led to the death of Kieran’s brother Finn and his friend, and the town blamed Kieran for the tragedy. His arrival is met with disdain, and when a murder occurs, Kieran is dragged back into the tragic events of the past. Part character study, part mystery, The Survivors showcases Harper’s stellar writing style, and her vivid imagery helps to immerse the reader in the atmospheric and gloomy setting.