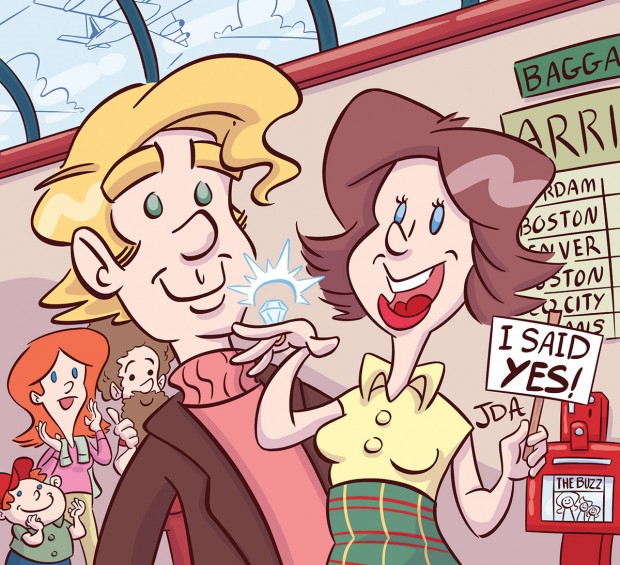 There are people out there who say Valentine’s Day was made up by a card company and is just one more of those “amateur night” holidays, the kind where everyone makes fancy plans, and no one has fun.

If you think about some Valentine’s dates-gone-bad, you might be convinced that’s true. Like the time one couple was headed out to a Valentine’s Day dinner only to have their 8-year-old son vomit all over his mother as they were walking out the door. They didn’t go.

Or the story Tevia McLaren tells of being stood up by her boyfriend on Valentine’s Day her senior year of high school. “We broke up,” she says. Update: They went to college and found each other again and have been married for almost 31 years.

Or when Tina Pyne was in her early 30s and had a blind Valentine’s date. “I was hungry and took a big bite of spinach salad [just before] the doorbell rang,” she remembers. “He was English and said, ‘I see you have already had dinner.’ I had a big green leaf on my front tooth! Needless to say, I never went out with him again.”

Or the date Peggy Haney went on as a freshman in college. They went to Vargo’s. Peggy remembers, “I was so excited, and we had a lovely dinner. Until it was time to pay.” The poor date’s credit card was declined, and Peggy hadn’t brought a wallet. She waited for her date to find an ATM and come back with cash. “I never went on another date without my own money again,” she says.

But if you talk to Susan and Bob Zeller, Valentine’s Day is pretty special.

“My father’s very best friend was head of child neurology at Columbia Presbyterian Medical Center,” says Susan, who lived in New York at the time and was working as one of the first female auctioneers of antiques (another story, which we will tell another time). “He called me one day and said, ‘There’s a young man coming up from Texas Children’s – to me that was like shoot-’em-up in the West – and he wants to be a pediatric neurologist and doesn’t know anybody in New York. Would you have dinner with him?’”

Dinner was successful; Susan and Bob started dating. Three weeks later, Susan says, “My college roommate had gotten married and moved to St. Thomas. She and her husband asked me to come for a couple of weeks. I wanted Bob to say Don’t go, but he never said don’t go. So I went. Meantime, unbeknownst to me, Bob calls my parents. My parents were really kind of cool. Weren’t they fun, Bob?” Bob is nodding.

“So Bob had dinner with them and said he was going to marry me. They were a little surprised because of the short time, but I had already told my grandmother after our first date that I wasn’t sure when, but I was going to marry this guy. Bob, correct me if I’m wrong.”

“Why would I correct you?”

“Next thing you know, there’s a blizzard in New York. Bob called me in St. Thomas and said, ‘You need to come home.’ I couldn’t fly into New York, but he could get out. His parents were in Miami Beach, and I had an aunt there, so he told me to meet him in Miami Beach.”

“We go to the airport, and who shows up but Bob’s parents,” Susan says. She hadn’t met them before. “His mother kept saying, ‘What is all this about?’ With that, Bob’s flight lands, and he’s at baggage claim, and his mother is yelling, ‘What is all this about?’ So Bob finally turned around from the baggage claim – I was outside that area – and says, ‘Susan, will you marry me?’ And everybody at the airport started clapping. And that’s how we got engaged.

Fifty-one years later, Susan says, “I just knew he was who I wanted to marry. There’s a warmth about Bob and a sincerity and his sense of humor. What shines through with Bob Zeller above all else is his incredible integrity. I sat there that night and I thought This is a very, very special man.”

“You were looking for a doctor,” Bob says.

“No, I wasn’t looking for a doctor. This doesn’t mean I don’t get mad at him sometimes. But I think you have to continue laughing. Life has a lot of adversity, but if you have a sense of humor you move through it.”

On Valentine’s Day, you’ll find Susan and Bob laughing at dinner, reliving their first Valentine’s Day together in the Miami airport, and all of the others that came after it.